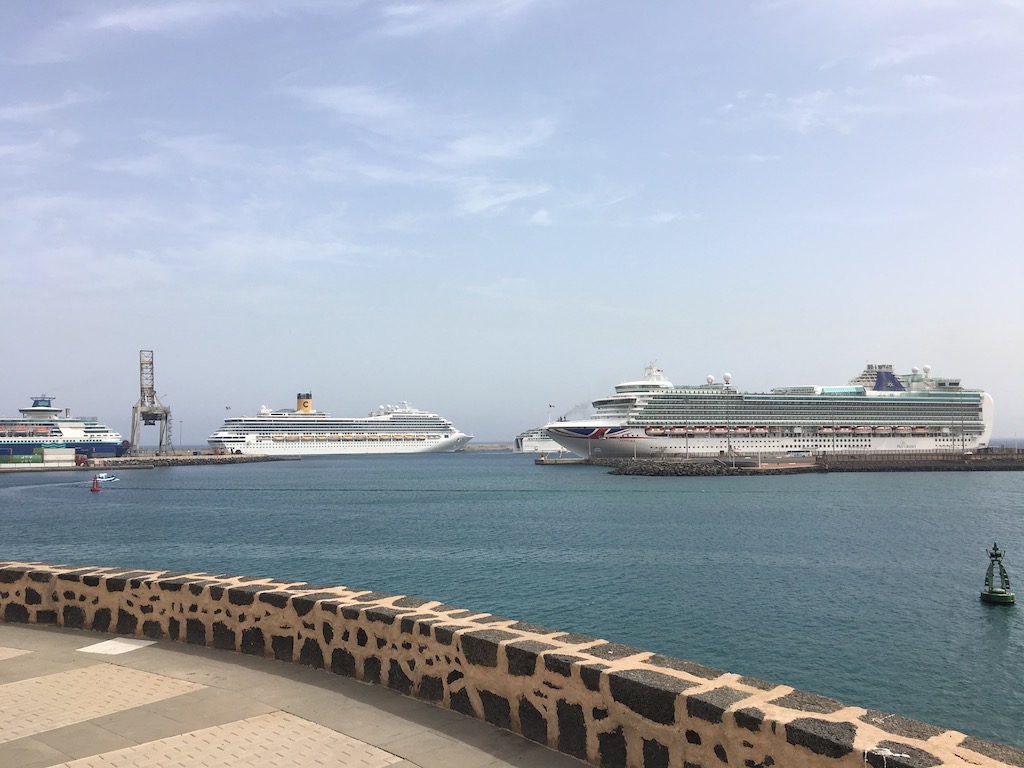 Whilst many cruise passengers will be heading out on their planned excursions in Lanzarote, there’s plenty of places to explore in the capital city of Arrecife.

Hopefully your cruise ship will dock at Marina Lanzarote rather than the Puerto de los Mármoles, if so the capital is within easy walking distance. If not pick up the hop on, hop off service or walk the Paseo de Puerto de Naos – Los Mármoles footpath.

This footpath was created to give cruise passengers a safe way of walking into Lanzarote’s capital city. It starts at the Puerto de Los Mármoles, there’s a gate in the blue fence by the harbour, which is open when cruise ships are in dock. The path winds up to the Castillo de San José which was built to protect the harbour and is now home to the International Museum of Contemporary Art (MIAC) and restaurant Muac. If you look down into the sea below at this location you can see the Rising Tide project designed by British sculptor Jason deCaires Taylor. Continuing along the path towards the fishing port of Puerto Naos you can see remnants of the old salt pans and windmills. If you like craft beer you may want to pop into Cerveza Nao, an impressive micro brewery with limited opening hours. Look out for the commemorative lighthouse, dedicated to the seven men from the Cruz del Mar who lost their lives at sea.

There’s a hop on, hop off bus service (which looks like a train) available for tourists to explore the city. It costs €4 for a day pass and has two different lines available.

This modern marina has a selection of shops to browse and restaurants to dine at. The French bakery called Damien is the hub of the marina. Upstairs on the first floor there’s a gym with outdoor pool.  If you’re looking for a fine dining experience, eat at Lilium, one of the island’s top chefs can be found at this restaurant.

This is our favourite spot in Arrecife for dining out, there’s a plethora of tapas bars and restaurants situated around this picturesque seawater lagoon. Our advice is to browse the menus and al fresco tables available before making your choice. A few of our favourites are La Bulla, Divina Italia and Tasca La Raspa.

The main shopping street is pedestrianised and known as Leon y Castillo, the shops here mainly open in the mornings and evenings, observing the Spanish siesta tradition. The trick is to explore the side streets leading off this one, to find the smaller boutiques and interesting shops. There is a street market on a Saturday morning, the farmer’s market stalls can be found in the Plaza de las Palmas, by the church.

Our capital city has a fantastic beach! The Playa del Reducto has lovely golden sand, with palms and sun beds. It’s situated on a reef, hence the name Arrecife, so can be a little tricky to get in the water at low tide. There’s a lifeguard service and toilet facilities available.

The tower in the background is the 5* Arrecife Gran Hotel, take the lift up to the 17th floor to their bar and restaurant to enjoy a panoramic view, this is the tallest building in Lanzarote.

There are not one but two castles in Arrecife and both of them are open to visitors. The Castillo de San José is situated overlooking Puerto Naos, this is the International Museum of Contemporary Art (MIAC). The Castillo de Gabriel is situated on an island, linked by the distinctive Puente de Las Bolas bridge and home to the Arrecife History Museum.

Arrecife has 3 parks situated along the waterfront area.

Parque José Ramirez Cerdá is situated where the iconic Quisco de la Música can be found, overlooking the Castillo de San Gabriel. There is a children’s play area and bar, as well as benches to sit and watch the world going by.

Parque Islas Canarias is situated between the Arrecife Gran Hotel and Casino Club Náutico, this was the central space in the city used for cultural events, the focus has mainly moved to the larger space at the Recinto Ferial. There’s wooden decking, plants and some sculptures. The island opposite is the Islote de Fermina, which is currently closed to the public.

The largest park and green space in the capital is the Parque Temático which has a skateboard park, children’s play area, exercise equipment, sculptures and gardens.

What ever you decide to do with your time in Lanzarote, we hope you enjoy discovering our beautiful island.