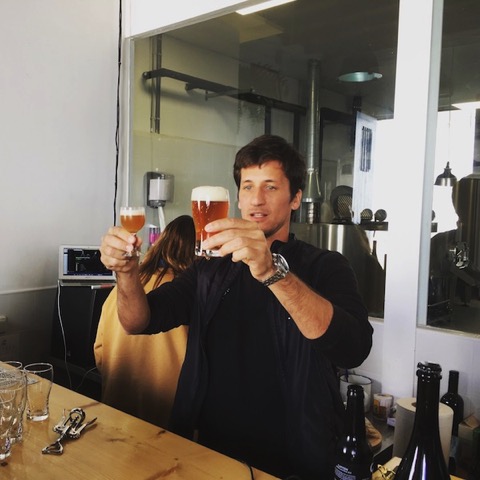 Cerveza Nao is a small craft brewery that has opened in Arrecife. We had already tried their excellent beers in various bars around the island, so we wanted to meet the team behind them, and to see the brewing process.

Nao are located in a small unit in the Puerto Naos area of Arrecife. They have state of the art facilities for the actual brewing and temperature controlled storage, although I was intrigued that every single bottle is closed by hand with a single machine.

We started with a tour of the facilities and Miguel gave us a short presentation which explained:

From there, we enjoyed a light bite of tapas, and then we got to try the beers. They currently have three on sale in the craft brewery, although there are two being offered in bars around the island.

This one was my favourite – it’s an American pale ale, made with barley from the islands, and a mixture of American and German hops. It’s a fairly strong beer at 5.2%, and it has a beautifully balanced flavour.

Julie loved this one, which is a blonde beer made in the style of the beer Napoleon’s troops enjoyed when they arrived in Berlin in 1809. They called it the “Champagne of the north.” It’s made with local cereals and American hops and has 3.5% alcohol.

This one isn’t available generally, but it is on sale in the brewery. Chatting to Miguel, he feels he hasn’t perfected it yet, and is still working on getting it right before releasing it for general sale. We’d agree – it’s a perfectly pleasant beer, but we felt it was missing some body. It’s a sign of the company’s attention to detail that they won’t release it until they feel it’s something really special.

One intriguing thing they have done this year is to make a beer using the local Malvasía grape as a base. They’ve called it Maresía and they have produced a very limited run of bottles of it. We were intrigued enough to try this hybrid beer / wine and bought one of them, but we’re waiting for a special occasion to try it, so I can’t tell you what it’s like yet!

Miguel also demonstrated to us his preferred way of pouring the bottled beers – he uses a standard beer glass, and pours until the bottle is almost empty. He then swills the bottle to mix up the natural sediment, and then puts that into a shot glass. There’s nothing wrong with the sediment, which is actually very good for you, but it prevents it from clouding the main glass. We bought two cases, and we’ve been pouring them this way since we got them home! And we both love the little shot of “strength!”

It’s fantastic to see a new business here, where they are so passionate about their product and really care about producing something very special. We’re sure they will do very well, and we’ll certainly become regular buyers of the beers, and will be popping in for drinks and tapas often.

You can call in to the craft brewery to buy beers by bottle, case or keg on Monday to Friday from 0800 until 1500.

And if you want to drop in, taste them on draft and enjoy some tapas, the little bar there is open Thursday and Friday from 1200 until 1600.

They are located in Calle Foque, 5 Arrecife and you can call them on 928 84 93 16. Miguel speaks excellent English.

If you enjoyed this article, you may want to subscribe to our famous weekly newsletter – it will come to your inbox every Friday and is packed full if information similar to the above.