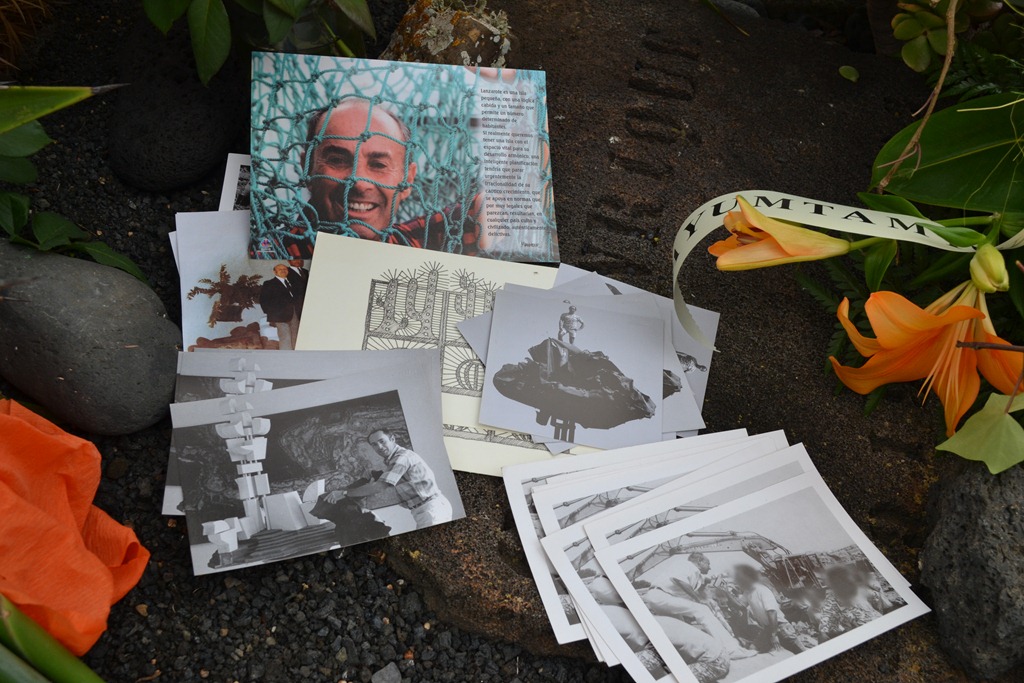 Julie wrote this on the 20th anniversary of the death of Cesar Manrique, in 2012.

Today marks the 20th anniversary of the car accident that killed Cesar Manrique and the day that Lanzarote lost it’s son.

I visited the Fundación Cesar Manrique this morning to witness the installation of a Wind Toy, the mobile doesn’t have a name, it’s simply Sin título. Serie Juguetes del viento. C. 1970-75. The piece was being returned to it’s original place in the gardens of the entrance at the foundation where it previously was in situ until 1998, when it was replaced by another artists wind toy. The original wind toy has been restored back to pristine condition by Magisa in Madrid.

After watching the wind toy craned into position to a round of applause by the media, I entered the exhibition El Taller de los Sueños to be transported into the more private world of Manrique and a reproduction of his studio at home in Haría. There are personal artefacts of paint brushes, shoes, glasses, diaries and notebooks belonging to the artist, the video we featured relating to the BMW 730i series car he painted is playing along with a display of photos relating to the artist over the decades.

I took the opportunity to wander through Manrique’s famous house with the lava bubble rooms, I’m still in awe of his talent, classic Manrique at it’s best.

Before leaving Tahíche,  I visited the the junction just along from the Fundación, watching the wind move Fobos and the traffic passing by, reflecting on the tragic accident that happened here 20 years previously.

The day wouldn’t have been complete without a visit to Manrique’s final resting place, here in the tranquillity of Haría, I found wreaths and a selection of postcards laid on his headstone from the Centros de Arte, Cultura y Turismo memorial service yesterday.