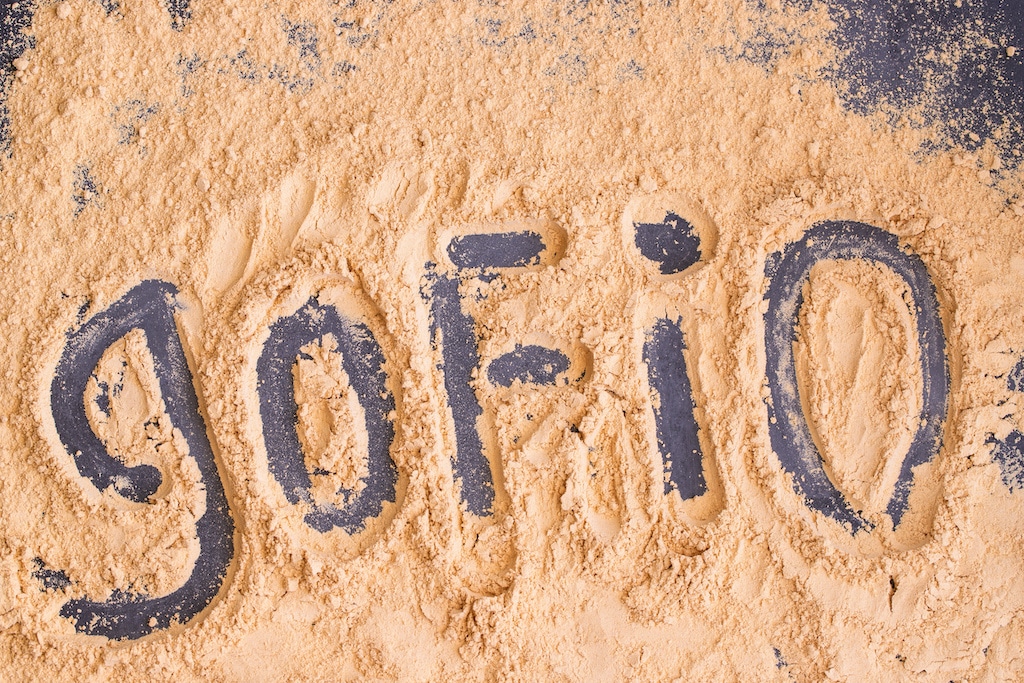 Gofio is a staple of Canarian cuisine, and you may have heard of it, but what is it, how is it made, and what is it used for?

It’s a kind of flour made from toasted grains – usually wheat or maize,  but also rye, barley, pulses and the roots of some trees.

It’s the toasting that makes it different to more usual flours and also gives it the brown colour. The grain is roasted whole and at a high temperature, which removes moisture and any mould and also  produces complex sugars from the starch, making Gofio easily digestible.

Once toasted, it is then milled very finely, like traditional flour, and the many old windmills you see around the island are testament to the fact that it was a major foodstuff here in the past. It’s very high in vitamins, fibre, protein and minerals.

Gofio dates back to the times before the Spanish conquest, when the guanches used gofio, made from barley, and the roots of the ferns which grew on the island. The word gofio is a guanche word. Thanks to the immigration from The Canaries over the centuries, it’s also commonly used in The Caribbean and South America.

You’ll find it in most supermarkets on the island.

Gofio is extremely versatile and be used in many ways, including:

One of our regular readers, Jonathan, is a big fan of Gofio and he sent us this:

I first encountered it as a darkish, brown powder in a large, glass bowl on the hotel breakfast buffet counter and labelled ‘Chocolate Gofio’. The congenial waiter told me how tasty it is with the addition of a little sugar and some milk–and he was quite right! In fact I became so partial to it that we went off to the nearby HyperDino in search of some packets to take home to the UK (where, incidentally, I have never seen it on sale). But despite our best efforts, we were unable to find Chocolate Gofio anywhere! Somewhat crestfallen, we explained the situation to a very helpful supermarket Manager who laughed heartily and then explained that the hotel kitchen staff had obviously just added some drinking chocolate or cocoa powder to plain Gofio and mixed it up well. And he was also quite right!

Since that discovery, I always travel very light when I visit the Canary Islands, leaving plenty of space in my suitcase for 10kg of Gofio La Pina to take home. It is packed in 1Kg. pinky/orange, waxy paper packets with the title Gofio de Millo—Tueste Fuerte, (which I assume means well roasted). There are other, lighter options, but I like the roasted variety best. Obviously it is possible to mix all sorts of things into the basic Gofio powder as a breakfast cereal, but I prefer to decant the whole packet into a large container and mix in a few tablespoons of drinking chocolate, cocoa powder, instant coffee granules and some Grapenuts,( if you’re clever enough to find the small packets on the top shelf of your local supermarket!). Maybe also some flaked almonds, sultanas, raisins or pine nuts too, depending on your particular tastes. Incidentally, Gofio is also excellent for putting in stews or gravy as a tasty and nutritious thickening agent. Presumably the Guanches used to grind the cereal by hand, with small millstones, and then enrich goat stews with it ! Gofio La Pina is a traditional Canarian staple, now produced in Las Palmas de Gran Canaria at a factory/mill which was established in 1957. In my opinion it is very under-rated, or even unheard of, by visitors to the Canary Islands who don’t know what they are missing! And it’s a healthy, nutritious product. Do leave room in your suitcase for a few packets. When you run out of supplies, it’s always a good excuse for another visit to those wonderful Canary Islands!! Bon Appetit.

So there you have it – that’s gofio for you!

More reading? Here’s a review of a book on Canarian History.