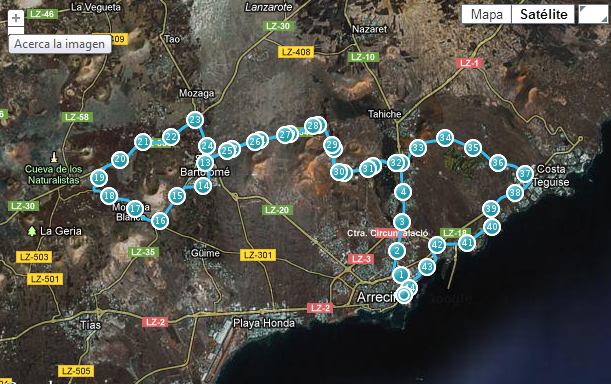 We love Cycling in Lanzarote and for a change we thought we would cycle around Arrecife, we ended up with a really great 45km ride., one that could be enjoyed by bike fit tourists taking in some attractions.

We parked on the land to the side of the picturesque Charco de San Ginés in Arrecife and set out  following the coast road in the direction of Costa Teguise and Puerto Naos. At the roundabout with the fishermen statue on we turned left onto the Rambla Medular, go straight on at the roundabout where the petrol station is, and then turn right at the second roundabout towards Tahíche on the LZ-1.

There is a cycle lane as part of the footpath for slower riders, we kept to the road which is a dual carriageway, there is a gradual climb of 100m over 5km before reaching the roundabout with the Manrique wind toy Fobos where we took the third exit to pass by the Fundación César Manrique, the road surface is a bit rough for a short stretch and then there’s a steep climb of 70m before passing the rubbish tip Zonzamas – not on our tourist list of things to do! Opposite here though there is an archaeological site of interest. Continuing a gradual climb along this road through the sandy fields, we reached San Bartolomé after 13km of cycling. We cut through the town towards Tías following the signposts, go straight ahead at the roundabout and then left at the mini roundabout, straight over the next mini roundabout, turning right to pass Casa Ajei and right again to connect with the road to Tías. After enjoying a short downhill to the roundabout with another of Manrique’s wind toys installed on, take the right to climb up through the rural village of Montaña Blanca where we reached the high point of the ride 390m – it’s all downhill from here, well almost!

Dropping down into the beautiful wine region and the village of Masdache, we took a right turning before the main road to cut through to Bodega El Grifo the oldest winery in Lanzarote, if you miss this just turn right when you reach the junction with the LZ-30. The Monumento al Campesino is another stopping point including toilets, if needed and situated at the roundabout at the end of this road. We paused here as you could go straight through to Teguise, which has a bit of a climb into the old capital, or cut through the road from the Complejo to Nazaret which has a really bad road surface – we decided to cut back through San Bartolomé and pick up the same road into Tahíche to enjoy the downhill, we’d cycled up earlier.

At the Fobos roundabout we’d covered 32km and decided to cut straight across towards the resort of Costa Teguise, there is a climb up before dropping down past the golf course and aquapark. We turned right and cycled down the dual carriageway towards Arrecife, looping around the roundabout to connect with the coast road to pass by the desalination plant and Telamon shipwreck. Turning left at the junction off the circunvalación towards Ikea and left again to follow the coast road past the Castillo San José & MIAC, a bit of caution is needed at the bottom of this road with potholes, before returning to the car park.

We took just over 2 hours to cover this route and thought it’s a great way for cruise visitors to discover the real Lanzarote in a day if they’ve got a good cycle fitness for the initial climb up from sea level. Having not stopped during the ride, we took advantage of a table at Bar Casa Ginory opposite the car park and enjoyed a bocadillo de pescado and cold beer for our recovery.

If you love Cycling in Lanzarote the same route could be taken with a start and finish from the resort of Costa Teguise rather than Arrecife if preferred.