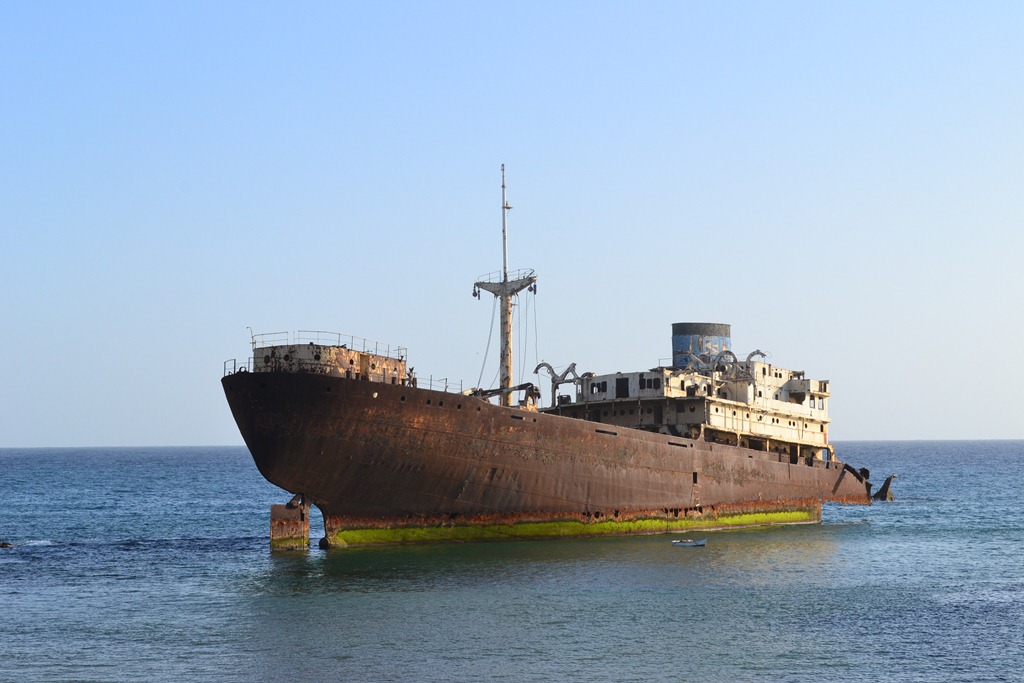 The ship wreck on the shore between Arrecife and Costa Teguise catches a lot of visitors by surprise when passing along the old coastal road by the port Muelle de Los Mármoles in Lanzarote. This ship was built in Dundee in 1954, read on if you’d like to know how she ended up beached in Lanzarote.

The Lambert Brothers Ltd were formed in 1878,  they took over the Temple Steam Ship Company in 1926. The Dornoch Shipping Company was founded in Glasgow during 1935  which included the Lambert Brothers and subsidiaries, this company was sold to Harrisons (Clyde) Ltd in 1954 when three new ships were added to the fleet including the Temple Hall which was built at the Caledon Shipbuilding & Engineering Co. Ltd (yard no 489) in Dundee and registered in London.

In 1969 Temple Hall was re-named Pantelis and registered in Piraeus, Greece when it was sold to Demetrios P. Margaronis who sold the ship on again a year later to Viajes Sud América in Panama, keeping the same name and flag.

Changing hands again in 1977 where she was re-named the Telamon, owned by Telamon Maritime Co. SA and managed by Armour Shipping Inc. in Greece.

The Telamon was on route from San Pedro from the Ivory Coast to Thessaloniki with a cargo of logs when she sprung a leak and was forced to run aground in Arrecife, Lanzarote on the 31st October 1981.

The story of the Telamon shipwrecking is covered in Spanish on the website www.escoben.blogspot.com who based the information on the news reported in La Provincia on the 1st, 3rd, 5th, 10th and 14th November 1981. We’ve translated the following excerpts:

“That Saturday October 31, 1981 a strong storm lashed the Canary Islands. It would not be a quiet day in the small port of Los Mármoles, Lanzarote. A freighter called called the port to request permission for emergency assistance as they had suffered a serious leak, they were travelling from Abidjan and San Pedro from the Gulf of Guinea and carried a large shipment of huge wooden logs on route to the Greek port of Thessaloniki in the Aegean Sea.

It was easy to comprehend the damage sustained to the ship, a simple look and it was realised that the ships gravity was not sufficient to make the dock, there was a possibility of it sinking into the inner harbour which would render the port useless. The forecast was still heavy seas for the following day.”

As you can see from the photo above, the Telamon was in a sorry state when snapped in Abidjan prior to her last voyage, the lack of proper maintenance was evident.

“The Telamon was in the Bocaina Straits between the islands of Lanzarote and Fuerteventura when the hull sprung a leak with water flooding the vessel quickly. The captain was forced to demand help from Lanzarote in fear of imminent sinking primarily due to the type of load they were carrying below deck which if shifted could be dangerous to the integrity of the ship and crew.

Immediately work began on the bilge but given the enormous amount of water continuing to enter, the captain Manuele Avtigromm communicated their desperate situation to the harbour master Antonio Sivera over the VHF radio. The situation was considered but it was not convenient to proceed due to the heel on the ship which made it not viable.

The port at Los Mármoles, Arrecife which is the capital of Lanzarote is small and they could not afford an accident of that magnitude so the Telamon was manoeuvred a few hundred metres to the area of Las Caletas  in front of the DISA fuel tanks with the intention of gently grounding the boat on the sandy bottom in the bay situated behind the harbour wall.

The manoeuvre was completed with great skill, two ropes were stretched to the ground, the ship had been uneven with the bow facing the land only a few metres from the shore. The Telamon had a slight list to port but in principle wasn’t a safety hazard. Many locals recalled another marine incident that of the Russian transatlantic vessel Kareliya (5) which had ran aground nearby.

The 29 crew members of the Telamon were mostly Greek but with some from Ghana, Mali and the Ivory Coast, they were taken ashore and given accommodation in Casa del Mar and residencies of San Ginés

The owner Mr Ninnos came to Lanzarote on Monday 2nd November to check the accident personally. The hull was inspected by shipyard divers from Puerto Naos and the report was made immediately, the leak had occurred within the hold which was two thirds flooded and full of tree trunks.

The next day three technicians from an environmental association friends of the sea arrived on a plane from London with the necessary equipment to prevent a possible oil spill in the event of a fuel tank breaking. Do not forget that on board was 260 tonnes of fuel oil and 60 tonnes of diesel oil. They immediately got to work and installed a big pneumatic platform surrounding the outside of Telamon and a special liquid was spread to dissolve the fuel oil in case of leakage.

Shortly after the incident the cargo was unloaded and transferred to the island. Some time later a company was interested in re-floating the Telamon but the project did not go ahead due the expense (apparently over a hundred million pesetas), they withdrew and never again showed an interest.

It was inevitable that being so close to the shore the ship was inhabited by squatters but as it wasn’t comfortable conditions they opted to seek more accessible housing.

Later during a storm the Telamon changed her position and split into two halves..“

We found the following video of divers exploring the Telamon ship wreck which was uploaded to YouTube in September 2010.

So there you have it, the sad story of the hard working cargo ship that was left abandoned after springing a serious leak off Lanzarote in October 1981.

onLINE #TelamonTrickline – A Slackline journey on Lanzarote from Markus Casutt Videography on Vimeo.

We’re not sure how much longer the Telamon will by a landmark on our shores, the Autoridad Portuaria de Las Palmas have granted the Recuperadora Lanzaroteña permission to dismantle and scrap the vessel. Apparently the port authority wanted the ship recovered as it could prove to be a danger for people who venture into the wreck. Despite this news announced in late 2014, work hadn’t started by early 2018.

Find out about our Lanzarote books and guides.