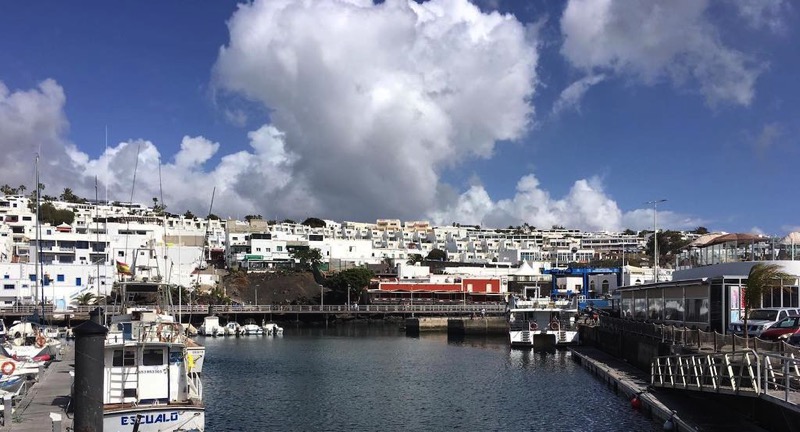 You’re wondering what the January weather is like in Lanzarote? We’ve been recording the actual weather here in Lanzarote since 2008 for our daily weather forecasts on Facebook, so we have a pretty good idea of what really happens here, which is much more useful than the standard “weather averages” you see in holiday brochures or online.

So, what’s January like? We’ve gone through our own weather reports and we’ve summed them up for you.

It’s light from 0730 until about 1800 in January. The sun still has high UV, so you will tan, and even burn! There’s a fair chance of cloud for part of the days, but when it clears the winter sky here is the most incredible blue.

We do get some rain as part of our January weather. Typically, it will only be on 4 or 5 days, but it can be heavy. When it does rain here, it tends to be short and sharp, and then the skies clear.

Daytime temperatures can vary from a low of 19 to a high of 28 degrees, but are usually in the range 22 to 24. January nights are as cold as it gets in Lanzarote, so expect 14 to 18 degrees, although in the hills, you might see 12!

Generally, the trade winds are quite light in January. You can expect 5 to 15 KMH, and usually it blows from north or north east. If it switches to a southerly, that often means rain is on the way.

2018 was weird. I started glorious, but by the middle of the month it got unusually cold on the island, with daytime temps struggling to reach 17 degrees, and falling to 12 at night. We also had rain in the last week and even hail.

2019 was superb for the first 21 days, as good a January as we remember – blue skies, no cloud and temperatures between 24 and 26 degrees, although the clear skies and light winds made it cool at night. The last ten days gave us cloudy intervals, with occasional showers, but no heavy rain.

2020 was another good January – it was unusually dry, with just one day with rain in the whole month, and generally, day time temperatures were in the low 20’s with light winds and lots of blue sky. The nights were chilly though, dropping as low as 10 degrees several times in weeks 1 and 4.

2021 brought us heavy rain in the first ten days – the first real rain for two years, and very welcome as it broke the drought. The second half was epic, though, with blue skies, very little wind and a big temperature range for Lanzarote – up to 26 during the day, but falling to an unusually chilly 11 degrees at night due to the clear skies.

2021 had it all! The month started with stunning blue skies, with unusually high temperatures, but it all changed mid month, with first a calima, then very strong winds and big seas. Once that died down, it became unusually cool, with day time temperatures as low as 15 degrees. We had a fair bit of rain in the last week, and it finally settled back to our usual blue sky weather right at the end of the month.

Shorts, T shirts and flop flops are fine during the day, but bring a light fleece for the evenings, and perhaps some jeans. When it’s sunny, it’s definitely beach weather, although the ocean can be cool at around 19 degrees. Unheated pools in hotels can be pretty cold as well at this time of year.