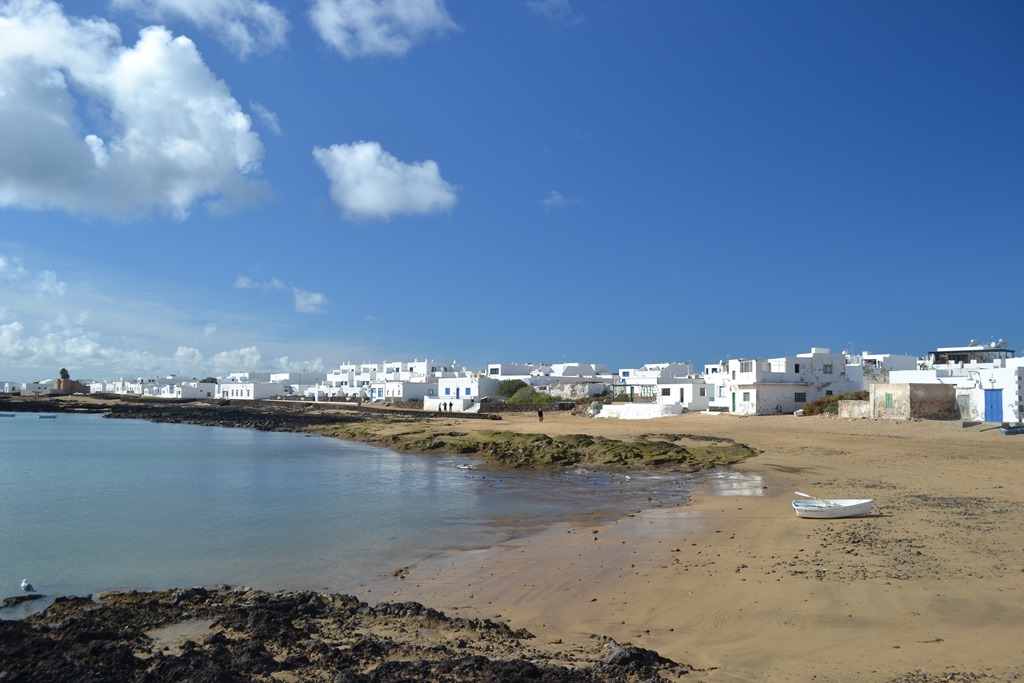 We’ve spent the last few years, since 2008, recording the actual weather here, which has allowed us to produce a pretty accurate picture of the weather you can expect in terms of November weather in Lanzarote.

We’re into winter now, but the reality here is that winter in Lanzarote is generally like the very best summer in northern Europe!

You can expect daytime temperatures in the range 22 to 28 degrees, falling to 15 to 17 at night.

The sun rises just before 7AM and sets just after 6PM. We can get quite heavy dew at night at this time of year, as the overnight temperature drops, so expect wet pavements and patios first thing in the morning, but the sun soon burns it off.

The skies are a lovely blue in the month, although there’s a good chance of some cloud, and you can expect rain on 3 or perhaps 4 days during the month. The rain can be heavy when it comes.

The ocean temperature falls during the month to around 21 degrees at the surface.

The wind usually starts to pick up again a little in November – you can expect most days to be 10 to 15KMH, but some days it gusts to over 40KMH.

Calimas (where Saharan dust blows across the islands) are rare in November, but they can happen, usually only for a day or so.

The UV is lower than mid summer, but still much higher than northern Europe, so it’s easy to burn.

November 2021 was exceptional at the beginning of the month, with lots of sunshine, light winds and temperatures in the high 20’s. It all went a little wrong in the final week, where the tail end of a storm came to the island, brining a fair bit of rain, and some high winds, with the cold front dropping day time temperatures to the low 20’s.

2020 was the best November we’ve known in over 20 years on the island. For the first 26 days, it was epic and more like mid summer – daytime temps in the 30’s, falling only to the low 20’s at night. In week three, Lanzarote was the hottest place in all of Spain by a mile! But the weather broke on the 27th and we had some heavy rain, the first in more than a year. For the last few days of the month, the temperature stayed up, but it was windy and we had some heavy showers.

2019 was absolutely typical for November. Some lovely, hot sunny days at both the start and the end of the month, with a few cloudy and windy days in the middle. We did have some rain, but not much, in week three – enough to wake up the weeds, that then shrivelled quickly in the warm sun.

2018 wasn’t the best year for a November visit. Although it stayed fairly warm, the island had an unusually high amount of rain, very heavy at times, and big ocean swells. This took place in the first three weeks of the month, and the island turned unusually green. By the fourth week, it improved greatly, and the last few days of November 2018 were splendid.

November 2016 was splendid – with warm, sunny days and light winds. There was a short calima at the end of the month.

In 2015 we had some light showers at the beginning of the month, before it all settled into the usual pattern.

November 2014 was the wettest month in the islands since records began. We had pretty persistent rain for 12 days in the middle of the month, receiving 135MM of rain – about three times the normal amount for the month. The upside was the wild flowers that sprung up everywhere! The rain was caused by a series of storms that caught us on their way across The Atlantic.

Layers is the order of the day and night. Shorts and t shirts will be fine during the day, but if it does get breezy or it rains, a light waterproof can be useful. In early evening, you’ll want a fleece and late at night you might want a sweatshirt.

Umbrellas tend to be a waste of time here – when it rains, it’s often windy and the rain is heavy, so umbrellas don’t cope well.