The Windmills Of Lanzarote 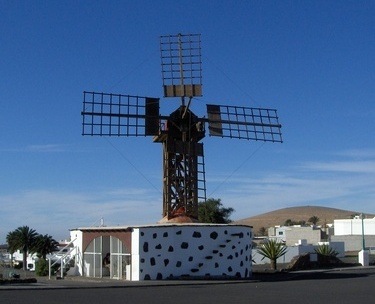 Lanzarote still has several remaining windmills (los molinos) although a few of these are now in ruins. The Lanzarote windmills are a feature of the island and provided motive power for many uses, thanks to the trade winds. The Lanzaroteños grew maize, which after harvesting was toasted and then taken to the local mill for crushing to create their staple diet of gofio.  The mills were also used to crush barley, wheat and chick peas to create flours (frangollo, millo & trigo).

The Lanzarote windmills can vary in height as they could have one or two floors. The millo tostado (roasted corn) was taken inside up the stairs to the top of the building and poured into a special wooden funnel (tolba), which dropped the corn bit by bit onto the huge lava rock millstone with a central hole, underneath this stone would be a similar round stone but static.

The wind would turn the sails which could be turned to harness the direction of the wind, the sails moved a series of gears which then transmitted the power to the top millstone to crush and grind the toasted corn into the gofio powder, this would then pour out of a chute to the floor below where it could be sacked.

If there was a lower floor of the mill, this would be the warehouse (almacen).

The windmill at the Jardin de Cactus in Guatiza is a fantastic example of a typical gofio mill. The windmill was described by the author Olivia M Stone in her book (Tenerife and its six satellites) during her exploration of the Canary Islands in 1884 as:

“Beneath the village is a windmill of the regular Don Quixote type, and so low down, that we can readily understand that individual charging it. Near the windmill is an earth quarry, for in this plain of lava, once no doubt a fruitful valley, mould has to be dug from beneath the slag. The quarrying has gone down some 20 feet, leaving here and there monoliths of lava, pillars standing upright, originally on a level with the ground”

The website Memoria de Lanzarote has this photo of the windmill from 1971 before César Manrique started the renovation of the mill and quarry for the cactus gardens.

The windmill is situated on the main road through Uga heading towards Playa Blanca, on roundabout on the outskirts of Yaiza. The sails have been removed and the property converted into a house. In 2006 the property was a opened as a tourist information office for Yaiza, its in the perfect spot for people heading towards Timanfaya.

This windmill is privately owned and was for sale recently, its in good condition but missing its sails. Situated on the main road in Tiagua heading for Soo. From here you can also see the mill at Museo Agrícola El Patio the agricultural museum situated at Tiagua.

As well as the strong tower Lanzarote windmills pictured above, the island also has single storey windmills built on a normal building with a wooden structure, these would still produce flour but in lighter winds and on a smaller scale. You will also see lots of wind pumps in Lanzarote, these were used to pump water around the salt pans.

More Reading: The fishermen of Lanzarote.

Casas del Sol V4 is on one of Playa Blanca's most sought after communities, close to the shops and beaches and with a fabulous swimming pool.