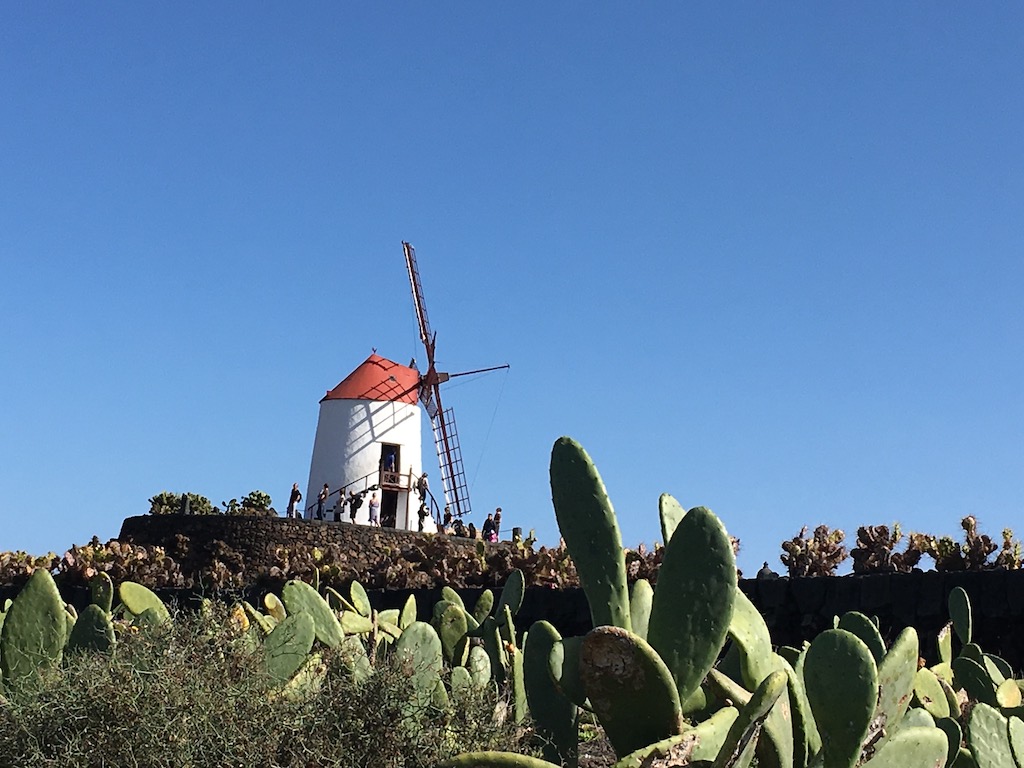 César Manrique found the site of the old disused quarry (el antiguo rofero) and mill (el molino) in Guatiza in the seventies and although work began in 1976, the Jardín de Cactus, the Cactus Gardens,  wasn’t inaugurated until much later in 1990, this would be César’s last project in Lanzarote before his untimely death in 1992.

You know you’ve arrived at the Jardín de Cactus when you pull off the road through Guatiza and park in the shadow of the awesome cactus sculpture. The metal gates have been forged into spikey cactus’s and its impossible to glimpse past the “taro” (shepherds style hut) at the entrance to see what lies beyond.

As you follow the curves of the entrance and around the wall with the cactus window in the centre be prepared for your first glimpse of the labyrinth of gardens. Manrique retained the basic circular structure of the quarry and created chunky layered steps around the circumference of the cactus gardens.

The gardens are very sheltered from the wind as they’re set down in a hole in ground, which protects the many varied species of cactus planted here from around the world.

There are lots of different paths winding around the garden, each taking you on to another level or area to explore, the lava rock and picón provide the perfect backdrop to show off the cactus.

In the centre of the garden is a series of water features with bridges to link the pathways, you can glimpse flashes of orange as goldfish swim by and admire the beautiful water lillies.

The bar and restaurant area is set into the far wall of the quarry, underneath the old windmill, giant sails provide shaded seating on the terrace with fabulous views down over the cactus gardens, whilst inside the bar there is a beautiful spiral staircase with a central sculpture leading out to a terrace area.

The garden is set on many levels, there are ramps allowing access for wheelchairs and buggies in most areas, but the access to the windmill is by a volcanic rock staircase which can be tricky for those not sure footed and when you reach the top level, you also find the wind!

Inside the windmill is tiny, there is a curved wooden staircase that takes you up into the eaves of the roof, where you can see the mechanism that allows the sails to be moved according to the wind direction and the huge lava millstone that ground the maize into gofio. There’s also a fantastic view North over the prickly pear cactus fields of Mala to the coastal village of Arrieta from the base of the mill.

The cactus garden is a photographer’s delight, there were lots of enthusiasts taking time to snap a photo not only of the cactus but also family too. You don’t have to appreciate gardens to enjoy wandering around the Jardín de Cactus, its a fascinating place and there is something there for everyone to enjoy.

Its incredible to discover that there are more than 7,200 cactus plants in the Jardín de Cactus with more than 1,100 different species from far away countries such as Peru, Mexico, Chile, United States, Kenya, Tanzania, Madagascar and Morocco as well as the Canary Islands.

These two photos are from the website Memoria de Lanzarote and show the Molino de Guatiza in 1971 before development and the cactus gardens when they were inaugurated in 1990.

As the gardens have now been established for nearly 20 years, there are some big specimens of cactus to be seen. We visited the gardens during the month of August and there were a lot of cactus in flower at that time of the year. Apparently most of the cactus tend to flower during August and September, some of the flowers only last a day whereas others can last for months.

Everywhere you look in the Jardin de Cactus there is a reminder of César Manrique, from the cactus shaped door handles to the toilets!

If you only have 1 day in Lanzarote

The Seven Official Attractions of Lanzarote

Another Free Day Out!