The Castle On The Hill – Castillo Santa Barbara 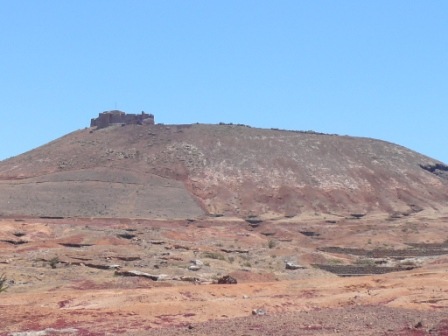 Update: The castle is currently closed for a major refurbishment to the outside walls. We’ll remove this as soon as it re-opens.

The Castillo Santa Babara sits high up on Mount Guanapay overlooking Teguise, the old capital and the island of Lanzarote. King Felipe II ordered the castle to be built by Don Sanco de Herrera in the 16th Century as a watch tower to help protect the islanders from pirates and privateers such as Sir Francis Drake who was known as El Draque (The Dragon) to the Spanish.

At the time, Teguise was both the capital of Lanzarote and the HQ of the Spanish administration of the whole Canary Islands, so it had major strategic importance.

There is a tunnel that connects the castle to the town of Teguise below which islanders used to avoid pirates. The castle was later modified after an attack by Arráez in 1586 when more than one thousand residents of the island took refuge there. The engineer Leonardo Torriani proposed changes that made the castle the version that we can still see today.

Castillo Santa Barbara was restored in 1989 and is now the Pirates Museum. This castle is in really good order, its interesting to wander around and read the information on the walls and look at the displays.

In the 17th & 18th century families were enforced to leave the islands to make new settlements and protect new lands in South America:

In the 19th century the Lanzaroteños left out of desperation, there was drought, financial crisis and hunger. 83% headed for Cuba and 8% to Venezuela.

It costs €3 per adult and €1.80 per resident to visit Castillo Santa Barbara which is open from Monday – Friday 9am to 3.30pm and Sundays 9.30am to 2.30pm, why not include a visit when you explore Lanzarote or go to the Teguise Sunday market to see the great views, architecture and learn about the islands history.

Stay up to date with Lanzarote news via our famous Lanzarote Newsletter.