Lord Do Not Stop The Carnival 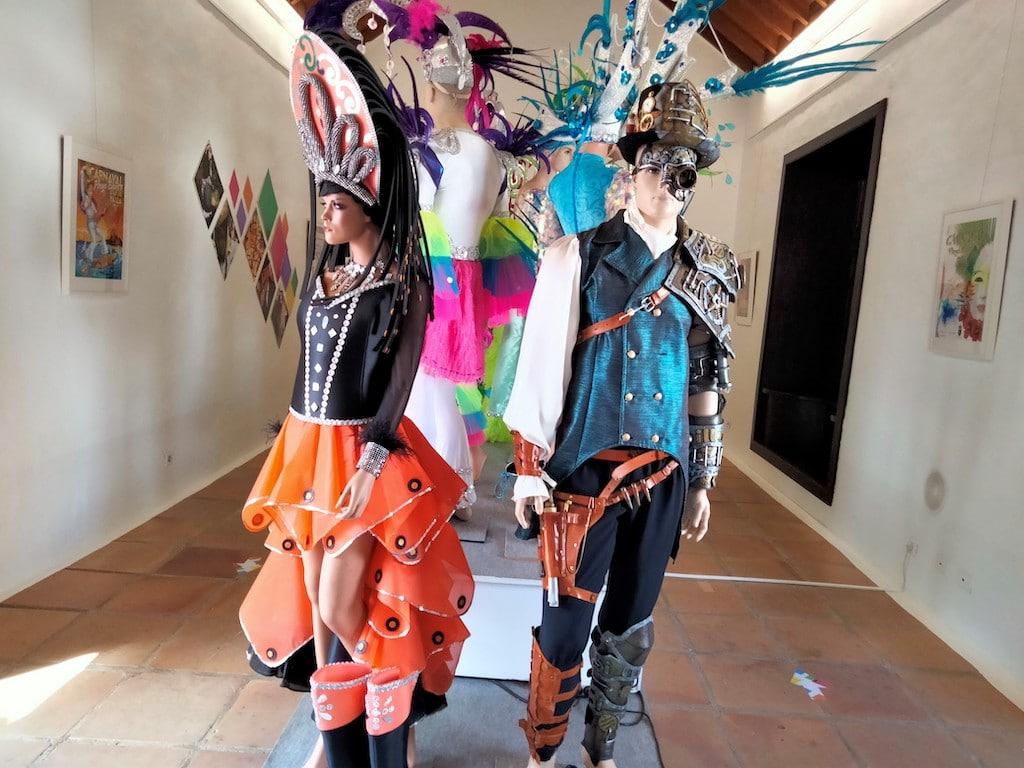 It was in 1968 that ex-Animal, Alan Price, with his new set of jazz / pop musicians reminded us that we´d never find a better way, to sing the night and day away and so begged, ´Lord, don´t stop the Carnival´. More than forty five years later in 2021, the Lord did stop the carnival, albeit for our own good as we fought against Covid.

However, here on Lanzarote, whilst we haven´t been able to line the streets and watch a seemingly endless parade of imagery pass by, we have nevertheless been able to visit The House of Culture in Yaiza to examine Carnival in minute detail. ExpoCarnaval 2021 is an exhibition of dressed mannequins with a brief video accompaniment of a percussion led carnival parade, and it is all stored and static in the small gallery in Yaiza. Pre-covid we used to attend all sorts of musical concerts and visual arts exhibitions at this lovely venue, with its quaint enclosed courtyard at the foot of the tree framed town square.

In those pre-covid days that we then took so much for granted but never will again, if they ever return, we also used to join the crowds lining the streets in various towns on our island to hear the shrill whistles, deafening drums and smile at the fabulous fancy dress and colourful costumes of the dance troupes and organisations taking part. The parade would usually stretch away beyond our view, as hundreds of musicians, dancers, strollers and collectors passed us by, all waving and smiling.

Of course, this small exhibition could never recapture all of that but our visit not only reminded us of the thrill of the carnival parades but also revealed the fine attention to tiny detail that goes into producing the attire of such parades.

With this current exhibition only running now until the end of March, we met up with our friends Iain and Margaret to, as it were, catch the parade before it passed by.

Admission was free and it was all socially distanced and run under covid protocol but it was only 10.30 a.m., an early start in a display that had already been running for three weeks, so we pretty much had the place to ourselves, However, there was, thank goodness, also an attendant staff member who tried really hard to answer in careful English our gabble of questions asked in chaotic Spanish.

My wife Dee and Margaret were massively impressed by the amount of detail in each of the costumes, which our helpful staff member told them had taken months to create. The colours were exquisite and the cut of the clothing of females often quite daring, for an island that is in many ways quite discrete.

I, meanwhile, was intrigued by the posters on the walls, all advertising, with just a frisson of the carnival´s slight scary elements, parades of years gone by, and Iain was fascinated by the way Chaplin-esque images have slipped into Carnival´s long tradition in The Canary Islands.

The models and costumes are surrounded by such posters on all the walls as well as huge chunks of text in a legible size, explaining the history of Carnival as part of our culture and its modern emergence of parades that offer great significance to local islanders and also provide fun and massive photo-opportunities for thousands of tourists. All this information is set in large-font text, and even though my own Spanish-speaking skills are embarrassingly poor, we did, between the four of us, manage to contextualise it and make some sense of it.

The House of Culture of Yaiza was filled with colour and we felt quite privileged that we were, virtually, seeing a version of what is always the most unbridled festival of the year. This exhibition seemed a wonderful way to pay tribute to the true protagonists of the Carnival: ´comparsas, batucadas, murgas, drags, mascaritas and children’s groups´, which every year combine to create the most inclusive collective fun and enjoyment possible.

The mayor of Yaiza, Óscar Noda, had explained at the opening ceremony that “the City Council and the municipality with this exhibition want to return to all the makers of the Carnival the love that they always give us.´

´All those involved in bringing us carnival work tirelessly for a whole year,´ he reminded us, ´to make possible this great four-day celebration of joy that brings together neighbours and visitors, who we hope and hope will be able to return with more strength next year´.

The City Council brought together the councils of Culture, Celebrations and Social Dynamization, the latter two coordinated by Javier Camacho and Águeda Cedrés, respectively, so that the people on the Southern tip of the island, which is, after all, nearly thirty five miles away from the Northern tip of the island, could participate in the affectionate tribute that Yaiza was paying to Carnival.

The municipal Head Of Culture also recalled that ´the Island Council also supports ExpoCarnaval 2021 by donating the mannequins installed in two of the three rooms that the artistic exhibition occupies.´

Carnival ´season´ is a really fun time to be in Lanzarote, as there are myriad parades and street parties and a festive atmosphere settles over the place. If you really want to immerse yourself in the spirit of the carnival in Lanzarote, then you can even make, buy or hire a costume, even a simple one, and blend in with the locals.

The Carnival has been always one of the most popular parties on The Canary Islands. It is a time of year when  the inhabitants of the islands forget the hardships and the shortage. Also, it allows them some excess before abandoning alcohol and ice cream for the duration of Lent.

In Lanzarote it is difficult to determine the precise year carnival started, but many historians date it towards the 15th century with the arrival of the Spanish conquerors to the island, although there seems to be no literary evidence to confirm this supposition.

However, local folk-legend and stories and collective memories of town-folk and elders suggest the oldest reference we have about carnival talks about groups dressed up on the street making up their faces with a burnt cork.

This is a method also employed over the past couple of hundred years by The Bacup Coconut Dancers, a Morris dance troupe, from my neck of the woods in the North West of England, who would parade not so often in Carnival as in Rush-Bearing processions. This long-established group has recently been ´outed´ in the UK by those who see evil intent at every turn. Although such people see the ´black up´ as having racial connotations others believe the tradition began as a reflection of how historical industries in the area, mining, chimney sweeping etc led to an impossible-to-clean layer of grime being left on open skin.

During Carnival time on Lanzarote people have traditionally prepared food and drink to share with parading visitors who call in to grab a bite and enjoy music and dance. Normally owner’s boats gave fish to the local population, that is why on those days they were never short of sancocho, a traditional food in all houses of the island.

In Lanzarote the music of the foritos, or accordions, has always been a prominent sound of carnival whenever groups of people get together to have fun, always with musical instruments. The sailors of Arrecife, in those days known as  bucheros, would parade on the port´s streets on Carnival days dressed up with old country clothes, coloured ribbons, masks and, armed with dried fish bladders filled with air, used to run around and hit people on the way. Carnival has always carried this air of mischief, and perhaps with such revelry in mind, Carnivals were not allowed in Lanzarote during the Spanish Civil War of the twentieth century and it was not until 1963 that the tradition was revived..

Carnival also now represents a range of island traditions and mythical / legendary figures such as Los Diabletes,  involved in carnival in Villa de Teguise. Los Diabletes seem to be drawn from aboriginal, Spanish and Morisco beliefs.. These figures, which can be traced back to the sixteenth century, embody the billy-goat, a symbol of maleness and fertility, just like the ram was in El Hierro and later Los Buches in Arrecife.

The typical clothing worn by Los Diabletes is a white trouser and a shirt painted with red and black rhombus. Also, performers wear a big mask similar to a bull face with emphasis on the enormous horns of a billy-goat and the red tongue.

Typically, those performing in carnival under this guise wear their costume, play cowbells and carry a baton to threaten and ´hit´ the pedestrians.

When speaking at the opening of Expo Carnival 2021 the Councillor For Culture, Daniel Medina, anticipated that ´those attending the exhibition will appreciate the great detail of the clothing of fourteen carnival groups, the posters that have illustrated the Playa Blanca Carnival for the last ten years and other images that show the creativity that surrounds this party´.

Speaking for the four of us, he certainly got that right !

On the day after we had collected out T.I.E. cards ( a kind of resident´s id pass) it was great to see this reminder of how much Lanzarote is continuing to make its cultural offer to the indigenous, new residents and occasional visitors. That is at least one of the reasons we can be so confident that tourists will return to the island once this covid bug is finally exterminated.