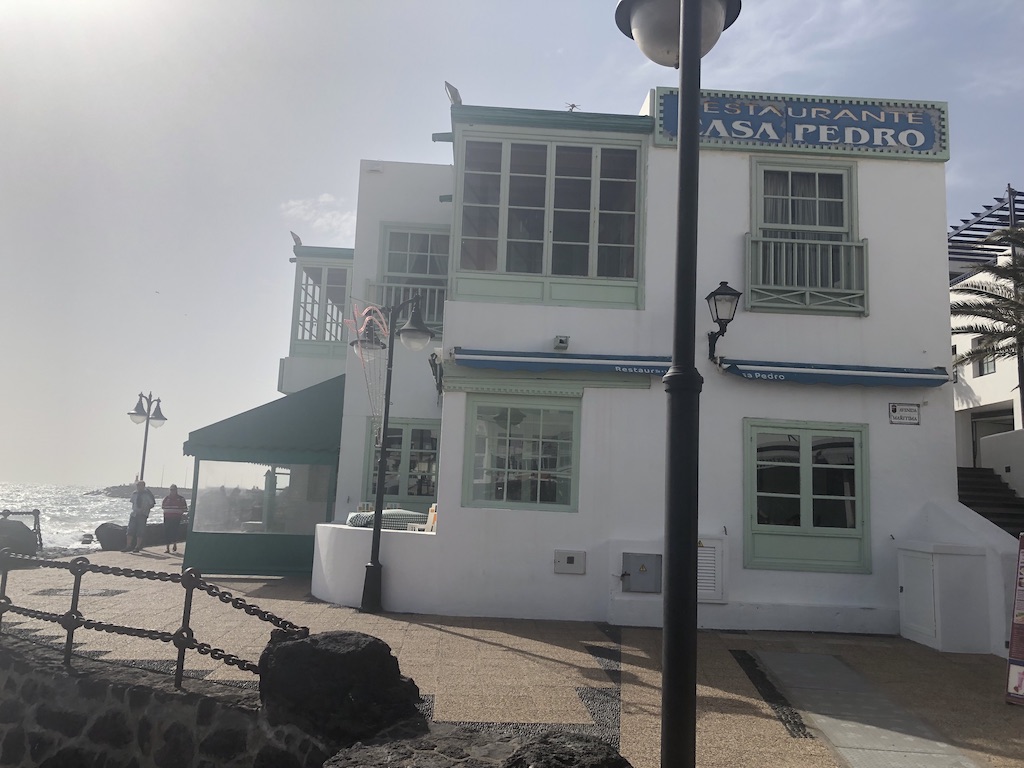 We’d heard good things about the sea food at Casa Pedro, which is right on the front in Playa Blanca, so we decided to call in for lunch there.

It was a sunny, but stormy day, and it’s fabulous being so close to the waves, while being inside the restaurant.

When he delivered our menus, the waiter told us about the special of the day, which was Cherne. We also asked for a bottle of El Grifo Colección wine, (a rare day when neither of us was driving,) and we were told a little brusquely that they had Bermejo and “es igual.” We were perfectly happy to have the Bermejo, but I’d disagree with his statement nota it’s the same.

To start with, we ordered fish croquettes and local smoked salmon. The fish balls were good, but the salmon was really special. Cut thicker than usual, and served with capers and a tartar / mayo mixture, it was smoky and delicious.

We decided the go for the special. Normally when you order cherne here, the whole fish arrives, on a platter with papas arrugadas. So when a different waiter came out with two plates, I told him he had the wrong order. But it turned out that at Casa Pedro, they serve cherne fillets which have been pan fried.

In the event, the fish was very fresh and beautifully cooked – just done, but not over cooked and at least we didn’t have to worry about separating the bones out.

The food was excellent, and we agreed we’d certainly go there again for the fish, but the service was average, bordering on grumpy, and the communication was very poor. When we were told about the fish of the day, it wouldn’t have taken a moment to add “filleted and pan fried,” and the wine could have been handled better with “We don’t have El Grifo, but we’d recommend the Bermejo, which uses the same local grape variety.”

Another little glitch was when the bill arrived. I put my card on the tray to pay, and was told “We only take cash here.”

Fortunately, we had enough cash between us to pay the bill, otherwise it would have meant an embarrassing trip to the cash point, with me leaving Julie as ransom! Why on earth did it not say so on the menu, or on the outside of the restaurant? (And yes, we checked on the way out.)

So in summary, the food is great, the location splendid, but the service, at least on the day we called in, is poor.