Getting A Taxi In Lanzarote 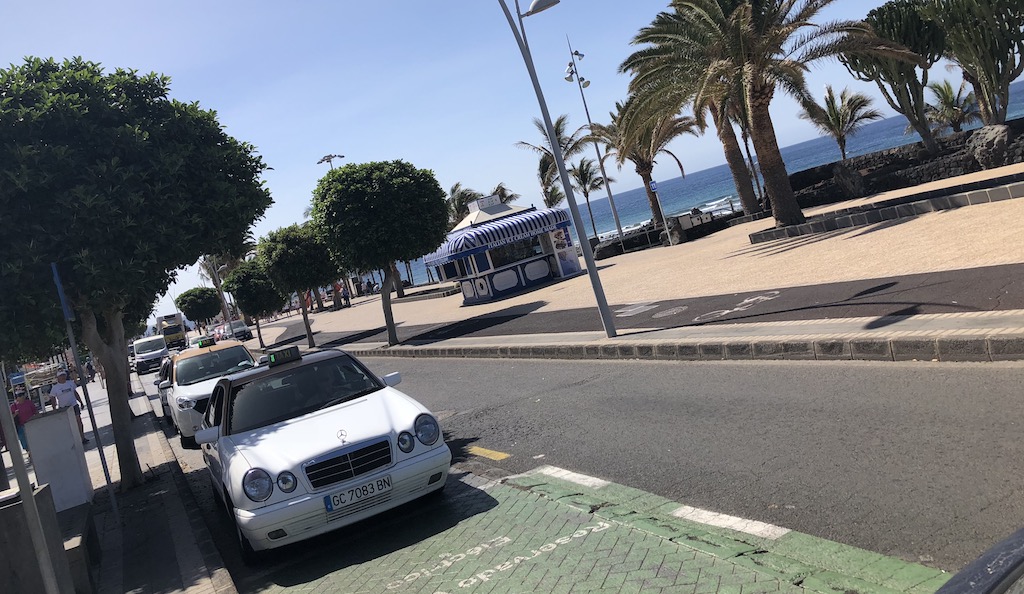 Getting a taxi in Lanzarote is simple and inexpensive.

There aren’t competing “taxi companies” on the island, and currently Uber and other ride sharing services do not exist here. Taxis services are limited to those with a taxi licence, and most are owner operated.  Drivers must show their identification to passengers with a notice in the cab.

There are disabled accessible taxis, 8 and 9 seaters and a range of saloons and estate cars. The most common car used here is the Mercedes E Class.

Each municipality issues it’s own licences – hence the different colours – Arrecife’s taxis are white, those from San Bartolomé are white with red roofs, those from Playa Blanca are completely red, for example.

There is a strict fare structure and all journeys are metered. There’s a minimum fare (from €2.15 to €3.35, depending on time and day,) a small (€1.65) supplement for collecting from the airport or port, and a €5 supplement for late night on Christmas and New Year’s eve.

Here are some typical taxi fares:

There are always taxis at the airport and ports. At the airport, on the busiest days, you may have a wait, but they come around pretty fast. There’s a handler who will ask you how many people and if any need assistance, and he will call forward a suitable cab for your party.

There are taxi ranks in all the resort areas, as well as the towns and villages.

You can book a taxi online by scanning this QR code, and creating a log in, in the app.

This isn’t as easy as it should be. According to the rule here, only a taxi from the municipality you are in can pick up a fare. So for example, a San Bartolomé cab that has just dropped off a fare in Playa Blanca, cannot pick one up from there to go back to the airport – basically, it must go back empty, and you need to find a local cab that will take you. It’s annoying and frustrating!

Phoning for a taxi

You’ll find phone numbers at taxi ranks, which will give you the number to call for a taxi local to where you are.

Taxis here, in common with most countries, don’t carry child seats of booster cushions. If you need one, you should bring your own – airlines will generally carry them free – and you should fit it into the cab yourself.

Watch out for the dodgy services

There are some people on island that offer paid lifts to the airport, for example, in their own cars. Bear in mind this is illegal, and their insurance almost certainly doesn’t cover them for carrying for reward, and you may be stopped and questioned by police.

Ignoring the frustration of the hailing issue, the taxi service here works very well and is great value for money. The drivers are generally excellent and extremely honest – we’ve been told many times about people leaving valuables or wallets in cabs and recovering them with everything intact.

While taxis are cheap and plentiful, using them regularly adds up – in fact you can hire a car for a week for less than the cost of a taxi to and from Playa Blanca: Car Hire Prices.