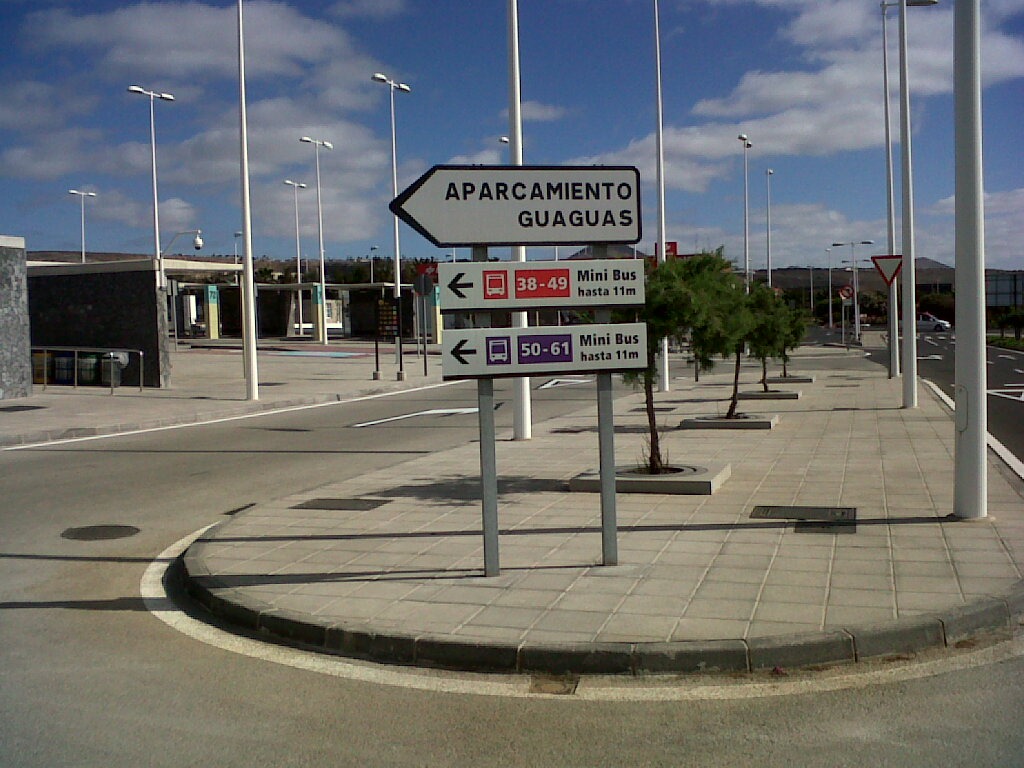 Following several recent comments about the enormous walk from the arrivals area of Arrecife airport in Lanzarote, for passengers being transferred by bus to their accommodation, I went to walk the path from Terminal 1 to the new bus parking area.

Exiting the arrivals area to the right following the signs for Bus, I arrived at the old parking area which is now closed off to traffic. Just ahead of me was a bus driver and two passengers so I tucked in behind them and we set off following the pavement around to the left.

There are six rows of bays which are easy to find with the coloured map and numbered spaces. I measured the walk using my GPS, it was 500m from the arrivals area to the middle of the bus car park and had taken me 5 minutes to walk and ride the escalators to arrive.

The project to build this new bus station cost 6,250,792 Euros, I’m sure that most of you won’t mind stretching your legs around the corner to the new parking area which can now accommodate all the buses required to transfer passengers arriving in Lanzarote.

I thought whilst I was in the area I should also check out the local bus service operated by Arrecife Bus / Intercity Bus as many people are not aware that you can catch a normal bus service from the airport. The Terminal 1 stop is immediately outside just ahead of the taxi rank, it’s not very obvious, look for the word BUS painted on the floor of the layby and a pictoral sign of a bus on a post.

There is a second bus stop at Terminal 2. If you follow the sign for Bus from arrivals and exit the terminal to the right you will arrive in the old bus car park. At the far end there is a sloping path and stairway, with the car park for Terminal 2 at the top.

Use the crossing to the pavement in between the roads for the drop off area and walk along away from the terminal until you reach the bus stop on the roundabout.

This walk was only 340m from the terminal and took 4 minutes, so not a long way or difficult to catch a bus into Arrecife. There are two routes that pass by this stop, Línea 22 and 23 the timetables of which can be downloaded as an attachment below.

Following the announcement of a new direct bus service to the resort of Playa Blanca in August 2012, it’s now easy to use the public service to access all the holiday resorts of Lanzarote. The number 61 bus departs from the airport at 07:30 hourly until 21:30 on weekdays and 08:00 to 20:00 at weeekends and on fiestas. The bus collects passengers from T1 & T2 before stopping in Matagorda, Puerto del Carmen, Puerto Calero, Yaiza and the bus station & harbour in Playa Blanca.

For Costa Teguise, take the No 22 or 23 buses to the capital of Arrecife then change to the No 01 bus to Costa Teguise.

Full timetables and more information about the Intercity Buses in Lanzarote can be found on their website: www.intercitybuslanzarote.es

More about the Lanzarote bus service.