Should I Hire An Electric Car In Lanzarote? 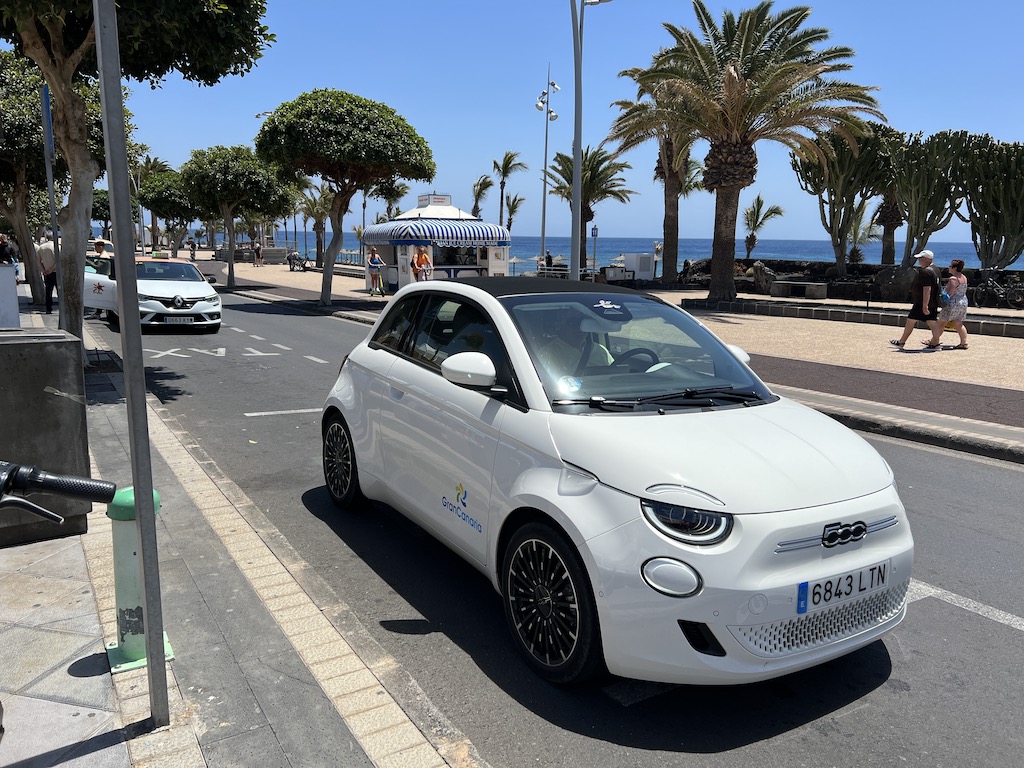 Many of the car hire companies here are starting to offer electric cars for hire. It’s a good chance to try one, in case you’re thinking about buying one, and it can be a really economical way to get around the island.

But everyone has the same questions – where can I charge it? How much does it cost? Does it come fully charged? etc.

We wanted to find out how feasible it is to run one here, so we decided to hire one ourselves and share our experience with you.

The big question is: Would we recommend you hire electric next time you are here?

And the simple answer is, yes, but only if you have access to charging at your accommodation, which probably means your hotel needs a charging station, or your villa or apartment has outside sockets you can reach from where the car is parked.

Currently, we don’t think we could advise you to hire electric if you are planning to rely on the public charging stations, and if you read on, you’ll find out why.

Click any image to open the gallery and see the captions

The car we hired was a Fiat 500 E. It was the larger battery, cabriolet version and was very well specced with radar cruise control, electric roof, good climate system and an excellent screen, with Apple car play.

When we collected the car, it was 100% charged, showing a range of 290 km and we were told we could bring it back with any level of charge.

It came with two cables – one which could be used on proper charting stations, and another you can just plug into a household socket.

The car was super to drive, especially in that 60 to 100 kmh overtaking range. It was very comfortable in the front, although I’m not sure I’d put anyone in the back, and the boot is tiny.

But this wasn’t a road test, it was about using an electric car in general….

The 290 km range from fully charged is more than enough for a day’s driving. The lowest we got the charge to was 20%. In the unlikely event you do run low on charge on a given day, it’s easy enough to use one of the charging stations here for a “top up.”

And that’s key: You don’t need to “fill the car up.” On a fast charger, you can add 50 km of range in a matter of minutes, get home and get onto your hotel charger or the socket at your villa or apartment.

We have an outdoor socket, but not a wallbox, at our house, so it was easy to use the cable supplied to connect the car after a day out driving. The car tells you how long it needs to fully charge. For us, depending on how much charge was left at the end of the day, that ranged from 8 to 14 hours, the latter after we ran right down to 20%. It’s not quick on a normal socket, but it’s very doable. We simply plugged in when we got home, and it was always at 100% by the time we needed the car again. You can also set the car to cool the interior on a hot day, while it’s still connected to the mains, which saves that big battery drain cooling it down when you set off.

This is where it all begins to unravel, but there is some very good news to share with your first. All the chargers we used were free! They were all sponsored by The Cabildo, so although I had to add the EV Charge app to my phone and put in credit card details, we weren’t charged a cent!

The problem is the lack of them, especially in the north of the island – there simply aren’t that many, and quite a few of them are relatively low powered.

The issue with all of them is that there is only a single charger in most places, so if you arrive and someone else is plugged in, or it doesn’t work, you could be stuck.

The one at Arrieta is an example of a low powered one. It about twice as fast as a domestic socket, but still takes its time. A full charge would be about 7 hours. We plugged in for 20 minutes while we had a coffee, and it was a decent top up.

Our first stop was the high powered charger in the car park at Costa Mar. And it was out of order. No signage, not information, just dead.

We then drove down The Strip, to the one outside Centro Atlantico. It’s a brilliant place to park your car, but it’s actually only a domestic socket, so it’s painfully slow.

The one in Tias in Avenida Central was a 7KW hour charge point, so about twice as fast as a domestic socket. We tried several times to plug in, and every time, the car told us there was a “Charging Error” and we just weren’t able to get it going.

This is a really high speed charger, and we felt lucky when we arrived, that it was available. We plugged in and the juice started flowing straight away and the car told me it would be fully charged within 60 minutes. We went to have some lunch and I had every expectation that the car would be at 100% when we got back. But unfortunately, something had gone wrong, and almost as soon as we had walked away, charging had stopped. I still don’t know if it was something I did wrong, or if it was the charger, and the app hadn’t given me any notification that there was a problem.

So, as you can see, if you’re replying on the public network here, you could get into trouble, or at the very least end up waiting in a queue, wasting precious holiday time. None of the above affected us, as we started each day fully charged and could easily have done everything we wanted to, without thinking about charging.

As we said at the top, if you have access to charging at your accommodation, go for it. But if not, I’d wait another year, to allow the public infrastructure to get better. It many not be free by then, but it will be a lot cheaper than paying for gasoline or gasoil.

We’re the Lanzarote car hire specialists. We’ve been offering car hire to our readers since 2008, working with all the best companies on the island, to offer transparent, low cost car hire, with no hidden extras or charges. Get in touch today for a quote for your dates: