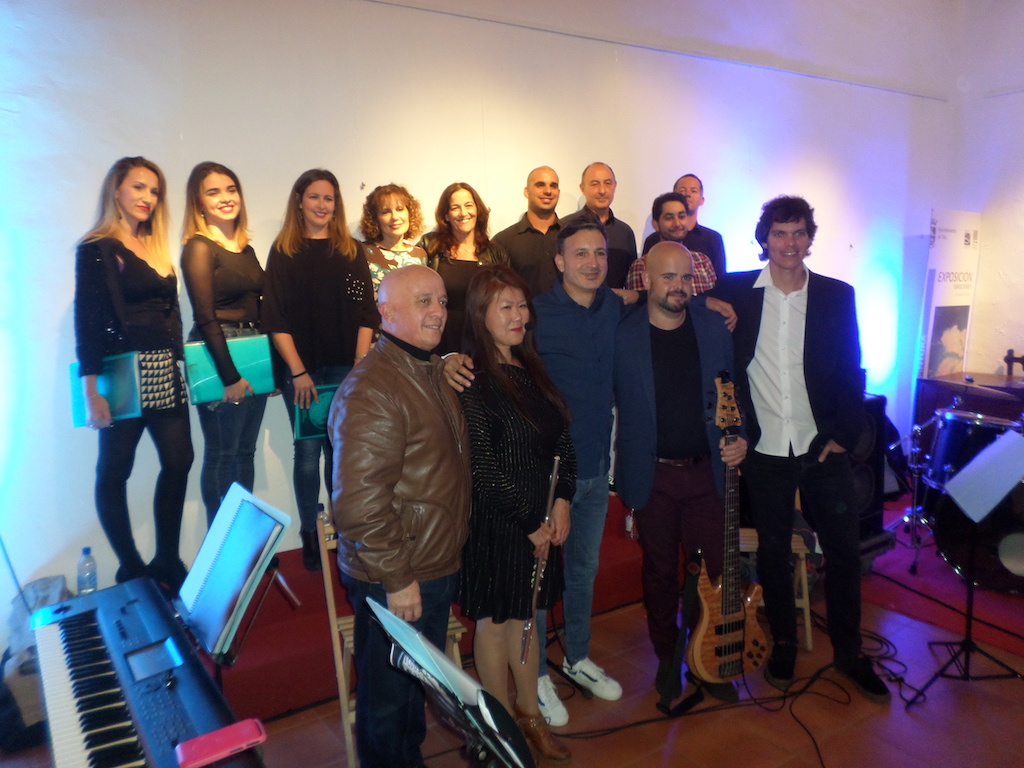 As Christmas comes to Lanzarote so do visitors from the U.K, and we had been looking forward, since September, to the arrival of Cas and Haz and Baz and Anne. We arranged to meet in a supermarket so they could lead us to a place in Puerto Del Carmen where they were staying via a global time-share points scheme. It was a beautiful apartment in a quite secluded complex, a hundred yards from the sea front and a slightly longer distance from Lidl.

Throughout the week it was great to share the island’s new green blanket and to walk beside the incredible crescent beach that joins PDC to Matagorda. We had lunch one day in that area, at Italica, and on another day we took the water taxi express from PDC to Puerto Calero where we looked at the sails and masts of the wealthy as we dined on a meal fit for kings at the Azure Restaurant. Sadly, there seemed few cultural events to attend but me and Haz and Baz did get to see both UD Lanzarote and US Yaiza play home league games on successive Sundays.

The Belen at Yaiza

Whilst we were at Yaiza’s game (they drew 2-2 against nine men, after sendings off) my wife Dee and Cas and Anne wandered round the small market in the town square, and looked at the Belen that Dee and I had seen being officially opened a couple of nights earlier. There had been a folk lore group playing that night, as hundreds crowded three deep around the Belen to see its lights come on, and a queue of fifty or sixty snaked away like a tail on a writer’s comma to the Crepe vendor’s van. A nutella coco and a hot coffee had been a perfect snack before we headed home around ten thirty.

Now, at market day, the folk lore singers were joined by dancers, too, and also Dee and Cas and Anne, before strolling the beautiful steps and footpath that adorn the base perimeter of Montaña la Cinta, had time to listen to some of Dee’s Spanish friends, from her yoga group, singing in the beautiful church with Coro de Yaiza.

The night before all this, though, we had enjoyed an ´Acoustic Dream.´ My wife, Dee, steps away when she sees the word experimental in preview information about any arts event. She fears avant gard surrealism, I think, and she certainly never saw anything experimental at the Cliff Richard concerts she used to attend. Having often put together successful public readings of my poetry accompanied by cathedral choirs, or percussive ensembles or by contemporary dance groups or even circus performers, I am perhaps more likely than Dee to applaud the adjective experimental, though I know from my own spectacular failures that sometimes artistic experiment can be disastrous.

The evening was off to a rather inauspicious start, when we found ourselves, for this event, at the wrong place in Tias. The lovely catholic church was just being locked up by the leaving congregation, and so we realised we must have misread either the time or venue. The ladies we asked then somehow mistook the nature of our enquiry and happily told us the next mass would be in half an hour up the road in Puerto Del Carmen. We, however, took it that they were telling us where the concert was to be held, given that we had shown them the advertising material. We decided, though, that a journey up to PDC would leave it very tight to arrive on time and decided, instead, to wander round the Belen and Christmas Tree a little further down the road in Tias. It was all beautifully lit, just outside a little church called,….oh, hang on, this is where we should have been all along.

We still had a few minutes to pass, so we stepped into La Ermita for a quick drink and a goat-cheese and honey savoury pastry that I just couldn’t resist. There were a few other customers in this spacious, well lit and intriguingly decorated Tapas bar, and all the staff were very welcoming.

However, just as we decided to head back to the church, there was to a mass exodus of the venue, and we realised a few minutes later that most of the hostelry’s customers were members of the jazz group and choir we were about to see. That’s right, jazz group  and choir,… a combination that even to my adventurous, artistic soul sounded pretty incongruous, and dare I say it, experimental. Any worries Dee had, though, were to prove completely unfounded.

Bosco Diaz is the pianist and musical director of a four piece ensemble that includes the lovely Yasuyo Tsuchiya on flute, a great laid back bass player in Acoran Ramos and a rock steady drummer in Luis Mateo. Bosco stated in his programme notes (I think) that this was an opportunity that had arisen out of nowhere´, and there was a good turn-out of friends and dignitaries to witness the outcome here.

The opening number, Intuition, gave the clue to them being a jazz fusion outfit, but it was immediately apparent that each instrument would give the others room to breathe and that this would be a case of instruments complementing, rather than competing with, each other. Nicely spaced apart, at ground level, along the width of the quaint and unfussy church, the group were led by Bosco in a sure, yet understated, manner.

There was chance for Yasuyo to shine as she and her flute took us on the flights of fancy of this particular Acoustic Dream, a title that would perfectly surround this entire concert. Conversion was a slower number but again included a lovely melody on the flute and also a gorgeous lengthy piano solo. Desire saw the flute lower in the mix with the melody here carried by the keys, with a walking bass run supported by accurate percussion. For the opening of Vengo Latino, Yasuyo replaced her flute with some sort of hand held percussive sticks to encourage the audience of fifty or so people to clap along. My wife did, (and I tapped my biro on my notebook!) as Yasuyo placed a lovely flute solo into the main body of the song. This piece was so enjoyed by the crowd that Bosco called a false ending and quick reprise encore of the work.

I Would Be A Bossa opened gently but soon took up the rhythm of its title before reaching its crescendo finish. Spoiler then came in on the count of four by Luis on drums. This number enjoyed a distinctive bass run and a rapid keyboard section. The band by now was Entering A New Stage that Bosco was having some difficulty explaining in English. It was all left to him though, after he asked Yasuyo for help only for her to explain that she spoke only in Japanenglish !

It was now time for the four piece orchestra to be joined by a choir of five females and four males, who stepped out of the audience to stand behind the jazz unit for En Algun Lugar De La Tarde and add strict vocal melodies to what was almost improvised jazz. It was amazing how well this worked and justified the experiment and the next number, With The Force of The Wind, enjoyed a long introduction by the entire instrumental ensemble before the choir joined in a full vocal chorus.

Vocal Director, Alicia Garcia, deserves great credit for drawing from her choir what turned out to be a splendid performance. Sopranos, Arrianne Rivero, Tatiana Gonzales and Alba Perez, along with the altos Berna Diaz (Bosco’s sister!) Mari Lola Hernandez and the tenors Nelson Perez, Ayosa Barreto, Rafael de Castro and Jorge Rodriguez radiated joy as they sang with the orchestra.

I’m Fine was a piece led by the male vocalists with the girls joining in the choruses and the musicians lending full support before the concert was closed by De Vida y Suenos (Of Life And Dreams), a perfect piece to summarise all that had gone before.

As applause was still ringing out and musicians and singers were posing for photographs for friends in the audience and for the media I took the chance to speak briefly with Bosco about the music. He and his sister found ways in English to explain to me that Bosco had written all the pieces played tonight and he and the musicians had arranged them into the overall concept of an ´acoustic dream´.

Experiments in the arts frequently reward the sense of adventure the artist brings to the experiment,…. and this had been a glorious, successful adventure well worth undertaking.

As one set of friends departed, though, we heard from some people we had met last year who had told us how much they enjoy, and rely on, Lanzarote Information. Margaret and Ian dropped us an e mail saying they are due back to their Lanzarote home this week and were wondering whether we knew of any forthcoming arts events!

Strangely, we are intending to get to Rancho Texas in a couple of days to hear a Dolly Parton tribute act, (so watch this space!), with Beth and Roy and we will somehow find time to meet up with a pal from Swansea to watch Lanzarote’s next home game.

Christmas might be a time of comfort and joy,….but we will probably have to wait until New Year for a rest.