X Factor Makes It As Easy As ABC 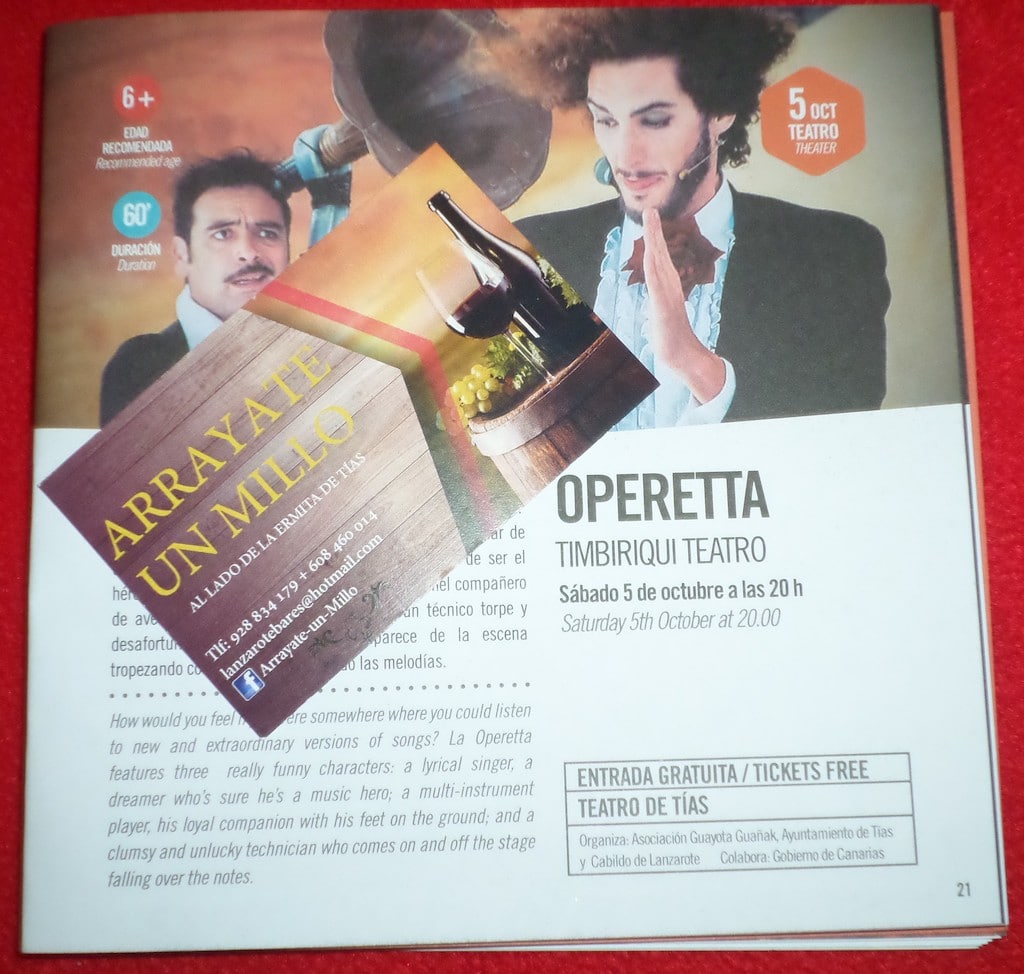 It was scheduled for an eight o’clock start. Incontrovertibly. I include a photograph of the page in the September edition of the Cultural Agenda to prove my point. So we arrived at Teatro De Tias with about twenty minutes to spare to not only find the venue already packed out, but also to find the show itself seemingly in full swing. The curtains to the rear entrance of the auditorium were closed, but we could hear music and laughter so I poked my head through. The stalls were full of squealing and excited children laughing at whatever was happening on stage and so I looked toward the performing area and realised that the act on stage was three actors shown in adverts as being the cast of the rather grand-sounding Operetta show we had come here expecting to see. I stepped back into the foyer to report my findings to ´she who has never knowingly been disobeyed.´

As I turned back to my wife to tell her my findings I could hardly see her amongst the crowds of people I hadn’t even noticed when we had first entered. Nor had I noticed the tables full of merchandise such as t-shirts, tea towels, calendars, books and cds, and the huge posters advertising the services of the well-known animal welfare charity Sara and also one, perhaps a subsidiary, called Sahara, all looking very child-friendly in their presentations. In fact, I noticed one poster that seemed to be detailing events that seemingly had been taking place here in the theatre all day and so I wandered over to read it in an attempt to understand what was going on. I read that events had started much earlier in the day and there had been three separate shows and workshops for young age-groups.

Just as I was running my finger down the schedule of events to our promised Opereta I was politely nudged out of the way by a young man with wild hair, looking much like the one in our photograph.

As I stepped aside he waved a big, black marker pen and altered the printed start time of eight pm to eight thirty, a time which I still felt seemed a little bit optimistic given how busy the theatre was with kiddies´ shows and charity stalls.

Nevertheless, there was a new restaurant and bar round the corner where we at least might be able to have a quick drink to pass the half hour or so still remaining.

Arrayate Un Millo was still pretty quiet at this time of the evening with only a few of its fifteen or twenty tables occupied. It is a beautifully clean and spacious dining and drinking area behind a huge and well lit glass facia and the staff were charming. We had noticed this new-build on a previous visit but perhaps hadn’t realised it was such a gem of a place obviously designed for local customers. So impressed were we that we were tempted to order a meal and give the show, should it happen, a miss but in the end, thank goodness, we decided to ask whether we could reserve our table for nine forty five, by which time our sixty minute show should be over.

We returned to the theatre just as streams of people were leaving and streams of people were entering. It was obviously change over time, and the charity stalls were being packed away, but not quickly enough to prevent me buying what looked to be a great compilation cd of Spanish folk music. We then found two seats inside for this ´free until full´ event that we had been looking forward to for weeks.

The blurb in the pre-publicity, after all, asked how we would feel to be somewhere we could listen to new and extraordinary versions of songs. La Operetta, we were told, would feature three really funny characters: a lyrical singer, a dreamer who is sure he is a music hero; a multi-instrument player, his loyal companion, with his feet on the ground, and a clumsy and unlucky technician who comes on and off the stage falling over the notes. These three characters, between them, would conjure up those ´new and extraordinary versions of songs!´

The lights dimmed, the curtains pulled back and the stage was,….well, we were some distance away in the back row but,….well, the stage was empty.

For a brief moment a disappointed silence hung over the audience but then we were disturbed by the rising sounds of an increasingly heated argument, and suddenly two people burst through the back doors and headed towards the stage still in the midst of a finger-wagging, shouting row. When they eventually wound their way to the stage it was is if they were seeing the audience for the first time, and this vision seemed to bring them to their senses. The conservatively dressed instrumentalist strapped on his guitar and began to gently strum it. His wilder, long-haired, frenetic partner, (the erstwhile poster graffiti-artist) brushed off his bow tie and tails, smoothed down his hair and began to sing beautifully alongside the guitarist. Wow. Whatever first impressions their awkward entrance had made, this was brilliant!

Suddenly, though, further into the song, the vocalist let go of his beautiful pitch and moved into Soprano range, suddenly flinging his arms around and strutting about the stage like an agitated Freddie Mercury. It was still good, but hardly in keeping with the song and the playing of his partner. The man with the guitar then quickly became more and more upset and began to remonstrate with the over-the-top-singer, and anyone who has seen the recently released film of Bohemian Rhapsody would have recognised the artistic differences being witnessed here on stage.

However, anyone who regularly reads these reviews will know that I rarely just think of art as entertainment but that I follow it in constant search of what it all might really mean. I couldn’t make head nor tail, at first of what was going on here or what it all might be about. Then it dawned on me, in a light-bulb moment. It was all about ME !!

These two artists were obviously re-creations of Lendanear, my folk duo / trio of the nineteen seventies and eighties.

The musician was representing my old mate Colin Lever: precise and studious and rehearsed. The mad one, then, I realised with sinking heart, must be me, all showing off and unrehearsed and unpolished, prepared to deliver loads of rubbish just for that one inspired line.

Our audiences were too often left with the impression that Lendanear were some sort of imrov group, and this duo, performing under the name of Timbiriqui Teatro seemed to be replicating our mistakes. Let me point out, though, on their behalf, that Andre Previn, and even Les Dawson, could only play the right notes in the wrong order because they knew what order they should be in and Tommy Cooper could only pull out a cat instead of a rabbit from under his fez because he knew how the trick should really work.

These two artists were similarly skilled, and although their act seemed to be tossed and torn, they walked on through the storm into a golden sky. It was comedy and musical timing at its best and their act spoke of the ingredients necessary to create great art: study and rehearsal and the ability to make the rehearsed seem spontaneous; individual flair and a spontaneity that can return at will to the formatted programme; the technical skills to make it all happen.

The latter was represented by their third member of this remarkable trio. This was a wandering on and off technician who strolled around the stage, oblivious to the roar of the crowd, and put plugs in where they should go, re-connected wiring, and put musical scores on music stands so the show could go on.

We had such an occasional member in Lendanear. Pete Benbow had a musical skills-set like Colin’s and a sense of fun like mine, but with a desire to stay behind the scenes like the ´mechanic´ here working wonders with Timbiriqui Teatro.

Colin was a teacher by profession and always was happy to share his knowledge and Pete was a postman, a messenger who distributed information and encouraged discussion.
I was a freelance operator, although a freelance operator of what precisely, neither I nor anybody else knew. All the ingredients were there, though, to make magic, and very occasionally we would do so. However, we never knew quite how we had done it nor how to replicate it.

This show seemed to be deliberately looking for whatever was missing, so often so nearly hitting the heights but constantly being let down by one member or another. Of course, they brought it all together at the end of the show when all three members played together, seeming to suggest that it is the harnessing of all the talents and an ability to work together that makes the magic.

They had delivered a wonderful show without seeming to try. In fact they had delivered a wonderful show while seeming to try NOT to ! Despite all their best efforts to move away from their script and to extemporise the show finished perfectly to time and we again headed across to Arrayete un Millo, where we found ours to now be the only empty table, protected as it was by a reserved sign.

The joint was jumping. There were local friends and families at every table, chatting in that animated and all at once way that is so typically Spanish. Wine was flowing and overflowing, plates of both hot and cold dishes were being served and it all looked wonderful. The menu, though, seemed plain and unadorned. There were tapas dishes, and fish and meat categories on the menu, but under the meat section the descriptions were as brief, for example, as beef, chicken and pork, of which I ordered the pork and Dee the chicken.

Our waiter came back a few minutes later with plates laden with marinated chicken and a similarly juicy pork dish for me. They were laid over beds of fried potatoes and, on mine, incredible tasting green peppers.

Dee described her house white wine as ´schplendid´ (a phonetic spelling!) and my beer was cold and wet, just the way I like it. My dessert of Coffee Mousse was soft and fluffy and the atmosphere was warm and convivial.

We put a big tick in our mental notes for Arrayete Un Millo without being sure precisely why. So we discussed it on the way home. Atmosphere great, service great, food great, drink great,…. but so what? The same can be said for a hundred restaurants on Lanzarote.

However, this one, and a few others, have something else. They have an X factor that no arts critic, restaurant reviewer, food gourmet, or tourist can define.

The same can be said of the arts too, I suppose. Lendanear, my group, had all the qualities but no X Factor, unlike Timbiriqui Teatro who had all the requisite ingredients and definitely also had that hard to explain X Factor !