With Coins From The Crowd 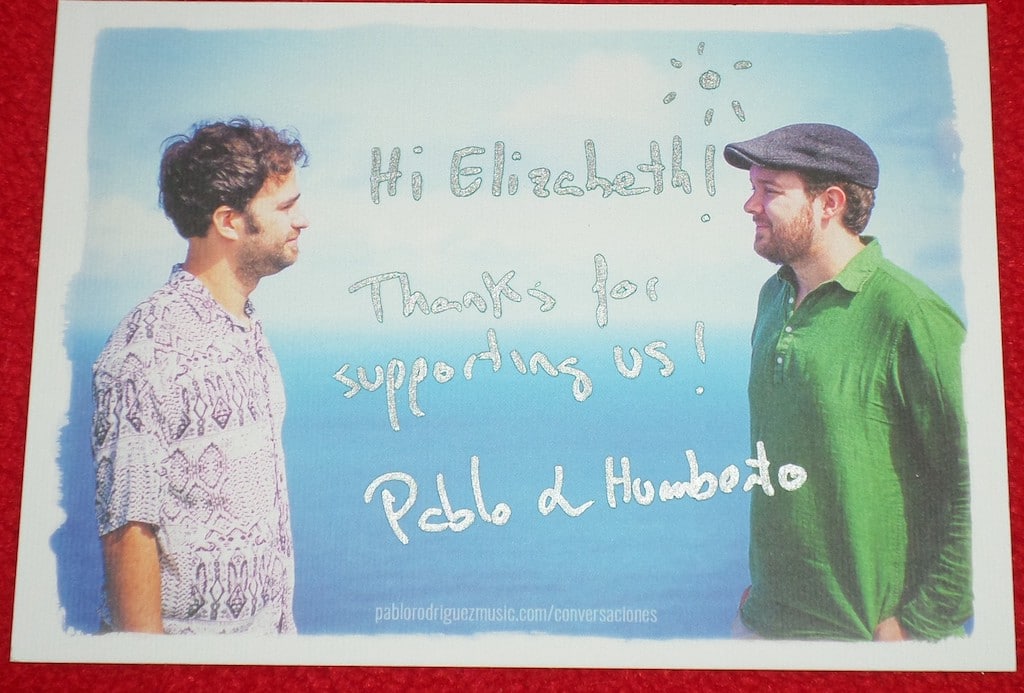 I wrote in glowing terms in the spring of 2018, on these all across the arts pages on the platform extended to me by Lanzarote Information, about two young musicians who were touring the island at the time working under the name of Humberto And Pablo. Crowd Funding & Cooking up a Storm.

I said then, when seeing them in concert, that my first impressions were of how young they looked, and how very different in character they appeared to be. Pablo was flat capped and casually attired, and his habit of pushing his glasses up and down his nose lent him an air of the late British comedian Eric Morecambe, or for any readers who might remember the Lancashire folk music scene of the seventies and eighties, also of the hugely comedic but musically gifted Stanley Accrington. Although Humberto looked rather more dapper, the respect between the pair was immediately apparent.

I went on to describe their syncopated rhythms and Joplin-esque piano and violin solos with their gypsy air. I reported, too, on Pablo playing the violin as if it were a ukulele in a piece that echoed a fanfare by Aaron Copeland.

When the musicians wandered around and engaged with the audience during the interval I took the opportunity to speak with Humberto who told me they were almost at the conclusion of a long tour that had brought them through Holland, Germany and Spain and out here to the Canary Islands. The whole tour had been well received, he said, but he seemed genuinely pleased with this quality of venue at El Grifo Bodega and the warmth with which the audience were responding.

The young musicians seemed delighted, too, that Lanzarote Information would be covering the gig and promised to keep me updated with announcements of any new projects. They also revealed that all those who had entered their names on this concert’s mailing list would receive two free preview samples of the recording the pair had scheduled to make ‘in the winter.’
I, and no doubt a hundred others, received an exclusive video sample a few weeks later.

Mine was linked to an e mail telling me that the new album is planned to be a crowd funded project, and that, despite only recently launching their plea for financial support for the album, they were already 54% of the way to their target sum, so by any reckoning, the first fortnight of crowd funding had been a success.

´We have surpassed our goals,´ they told me, as if to confirm that excitement, ´and are immensely grateful for the love and support of this project from our fans – but we are not there yet! We will continue to work hard spreading the word to keep the funding going.´

The following weekend the boys presented, in both Tenerife and La Palma, live performances of part of the repertoire they intended to record in December of 2019. The video download they had included in the e mail was of “Pequeño Interludio”, one of the tracks to be included on the as yet untitled album.

Humberto and Pablo then settled back down in in La Palma, rehearsing and exploring new ideas to incorporate into their debut album; a fusion of jazz and folklore from Cuba and the Canary Islands. They later described this period as ´a very enriching and intense time´ and they promised they would be sharing this campaign with their fans throughout the whole process!

At that Spring concert here on Lanzarote I was accompanied by visitors we had staying with us, one of whom is a weekly radio broadcaster of two jazz programmes on major UK digital and internet outlets.

Steve Bewick will be as delighted as I am to hear that the album is now ready and can be found at Spotify and Bandcamp and that ´hard´ copies of Conversaciones can now be ordered directly from the boys´ contact address at http://pablorodriguezmusic.com/conversaciones

I therefore look forward to hearing Steve play some tracks on his Hot Biscuits Radio programme, transmitted on Wednesday or Thursday at 9pm or late Saturday at 11pm. The programme can also be found at www.fc-radio.co.uk with archives of the shows available at www.mixcloud.com/stevebewick

I suggested, when reviewing that gig last year by Humberto and Pablo that a little bit of searching on a favourite engine should help readers find samples of their music, and that, of course, you should continue to follow these pages for further information about Humberto And Pablo. If you did so, I am sure you will have been impressed and might even have been tempted to become the musical equivalent of a theatrical ´Angel´ and support these artists who seem destined to enjoy a successful and sustained recording career.

The real justification for refurbishing this piece here today, though, is that our all across the arts office has just received an e mail from Humberto And Pablo, and it seems we might shortly have an album to review, too.

They tell us that, having received crowd-funding support from hundreds of fans, and after more than twelve months hard at work in the studio they are happy to announce that their new album, Conversaciones is now available.

Its eleven original tracks fuse jazz, Canarian and Cuban folklore and the classical sounds of the early twentieth century impressionist era. Listen in on these conversations, they say, and we will hear unique sounds and, ´if you can believe your eyes and ears´ as The Mamas And Papas once said of one of their own early albums, you will see and hear the violin become a small guitar or a percussive instrument and you will also witness a piano being played from within.

Although the music alternates between improvisation and moments of high voltage the melodic simplicity is never lost.

Humberto and Pablo speak in their e mail of ´the privilege´ of working with percussionist Rupert Ruppik and clarinettist Holger Werner on two tracks on an album that aims to show the relevance of the existing musical link between The Canary Islands and Humberto and Pablo’s beloved land of Cuba.

Many of the songs in these Coversaciones were premiered during last year’s tour of Europe and the Canary Islands. The two musicians are already busy planning a release tour for 2020 to promote the album, but those of us who can’t wait to hear how these songs have turned out can order a physical CD through the musicians´ Bandcamp page, and can meanwhile pick up itinerary details on Facebook and Instagram as the tour takes shape.

These gentlemen are pioneers, blending Canarian and Cuban music into new cocktails in much the same way as are Antonio de La Rosa and Carlos Luma, with their respective flamenco fusion outfits, also mixing the old and the new.

It seems to me that the ´free until full´ concerts that are such regular events around Lanzarote, and probably on other islands too, shed a favourable spotlight on emerging and deserving musicians. It is good therefore to see artists like Humberto and Pablo responding to that by working so hard to progress their career.

Crowd-funding is not just another word for asking for a few pennies in a musician’s flat cap. Unless the amount requested is reached within a certain period of the request being posted on-line then the pledges received cannot be ´cashed in.´ It is incumbent on the musicians (or artists in whatever form) to ensure that the amount requested will actually cover the costs of the project they are aiming to deliver.

To attract that support from their fan base the musicians must, of course, offer something of an incentive, as in this case Humberto and Pablo did by delivering free ´samples´ from the studio throughout the recording process.

So, huge congratulations to Humberto And Pablo for complementing their musical expertise with the entrepreneurial skills of creating a concept, identifying a market, producing a product and making it available and accessible. Their Conversaciones are certainly well worth listening to.

Pablo says of that this work is ´an open journey to improvisation. It is there that versions and compositions of my own, and the classical and popular, find their place. Jazz, folk, Latin …all these are part of the voyage we want to share with you”.

The two artists were born and raised on two wonderful islands, Cuba and La Palma, both separated and united by the same sea, only to migrate towards the unknown.

So this album is the starting point of an inspiring transatlantic journey – a journey where numerous ideas and influences have led to eleven unique conversations between the violin and the piano. Accompanied by improvisation and their eagerness to find new soundscapes, the duo reflects special moments of their search for a voice and identity of their own. Likewise, they aim to express the melancholy of living distanced from their roots as they seek to contribute to and reinforce the cultural link between their two countries.

The album runs for well over an hour and includes the tracks Transoceania, which sums up the ethos of the whole album, a lively and fluctuating Danza de los Tomates and the lengthy but beautiful Nuevos Aires, as well as the more sombre PSP Blues.

All tracks are composed by Pablo Rodríguez & Humberto Ríos and we have already mentioned the special guests playing on the album, Ruven Ruppik on percussion & handpan and Holger Werner on bass clarinet. Steffen Lütke was responsible for the superb recording and mixing, with engineer Chris Kosides. The album was recorded at Fattoria Musica, Osnabrück (Germany) and was eventually mastered by Joao Alves at Sweet Mastering, Lisboa (Portugal). It has been issued in an attractive sleeve with graphic design and photography by Pedro Fausto.

Conversaciones can be heard on Spotify, Apple and Bandcamp, where a hard copy can also be ordered on via Pablo’s e mail address shown on the bandcamp page. We will, of course, place on these pages further information we receive about their 2020 schedule in Lanzarote.