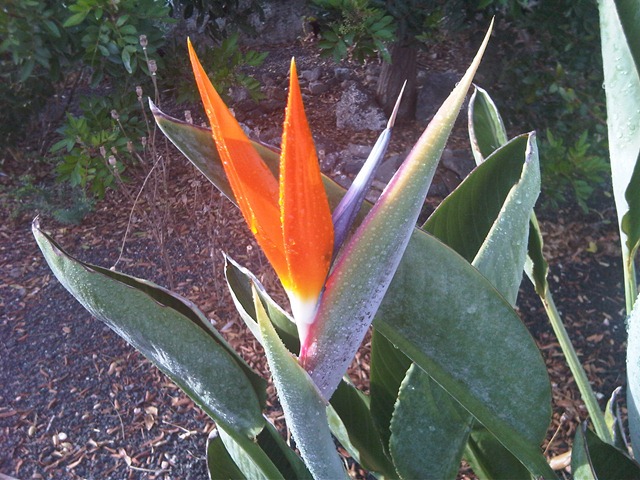 October is officially autumn, and we can get mixed weather during the month, but that can mean blazing hot days, as well as the odd cloudy or cooler day. Typically temperatures are in the range 28 to 34, although in 2017 we had several days in the high 30’s.

The nights start to get cooler in October, and you may see temperatures dropping to 15 to 18 degrees.

At the start of the month, the sun rises at about 7:40AM and sets at about 7:10PM, but everything shifts by an hour with the clock change towards the end of the month, so the mornings are lighter, but it gets dark soon after 6PM in the evenings.

We can get rain in October, but typically only on 2 or 3 days. Skies are generally a lovely blue, but there will often be wispy high cloud around, particularly in the mornings. October is generally the month where we see the first rain on the island since March.

The ocean is still warm – at least 23 degrees.

October is not typically a windy month, although we can occasionally get the tail end of a storm from The Atlantic, in which case we might have a few windy days.

Expect the wind to be in the range 0-10KMH usually. Costa Teguise tends to keep the wind a little longer in the month, if you are a windsurfer, and that’s because it “sticks out” from the island and is not sheltered by hills.

October 2021 was hot. For the first three weeks of the month, the daytime temperature didn’t drop below 30 degrees. We had blue skies, light winds and it was pretty much perfect for the beach. The final week of October started with some morning cloud, and the temps dropped to mid to high 20’s, but the cloud soon burned away each day.

October 2020 was epic – the whole month was warm, dry and sunny, although we did have stronger winds than are normal for the month. The island had been in a state of drought with no real rain for more than a year, so we were hopeful when the forecast predicted a rain storm in the middle of the month, but sadly it never materialised.

October 2019 was initially typical of the month – three weeks of lovely sunshine and blue skies. But it all went wrong in week 4, when we had some fairly persistent rain for a full day – very unusual for this time of year, but the good news is that the drought was broken. After the rain, we then had a couple of overcast days, before the temperature started climbing and in the final four days of the month it was very hot, with temperatures in the 30’s and no cloud.

October 2018 was amazing for the first three weeks – hot days and lots of lovely sunshine. At one stage we thought we were going to catch Hurricane Leslie, but it veered north. We did get some heavy rain at the start of week three, though and the rest of the month was then a weird mixture of one cloudy day and one sunny day.

2017 was spectacular and the hottest since records began, with day after day of hot, sunny weather, no cloud and very little wind.

2016 was similar, although a little cooler. We didn’t have rain in either year.

In 2015 we had some heavy rain in week three, which lasted 2 days, and then cleared to hot sunny weather. 2014 has a few showers, but was otherwise typical.

In 2013, we had thunderstorms (very rare in Lanzarote) and some very heavy rain towards the end of the month, which caused flooding in Arrecife and Costa Teguise.

2010 through to 2012 very very typical, each with a couple of days rain, and then excellent sunny weather for the rest of the month.

Beach wear and the usual shorts and t shirts during the day. You’ll want a light cardigan for the evenings, something warmer than flip flops on your feet, and perhaps a waterproof jacket if you plan to go out walking on the island, in case you are caught in a shower, which can be heavy.

For divers, a thin wet suit is still perfectly fine, and for triathletes, the water is just getting cool enough to be able to train in a wetsuit.