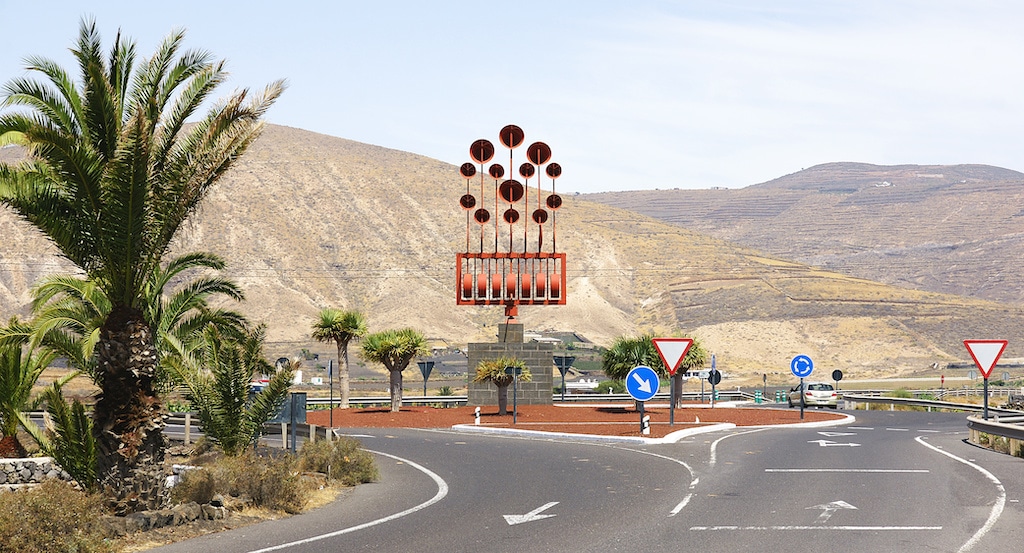 César Manrique loved his wind toys (juguetes del viento) and you can see a selection of them around the island of Lanzarote and on the roundabouts. The wind toys are made from cast iron and incorporate shapes such as pyramids and spheres in complex patterns that rotate in the wind. César started sketching these wind toys in the 70’s, he was aware that the traditional wind mills of Lanzarote were disappearing and wanted to create sculptures that would move in the wind to replace the loss of the windmills around the island of Lanzarote.

In 1990 the first wind toy was erected in Arrieta in the North of the island, the whole of the sculpture turns round with the direction of the wind and then moves up and down with the strength – like a giant weather vane.

Since Manrique’s death in 1992 several of his sketches were commissioned by the Cabildo de Lanzarote and are now sited around the island.

The first wind toy to be erected in Lanzarote at Arrieta on the main road heading to Órzola.

The white wind toy is located in the car park for the Fundación César Manrique and the multi coloured pyramid can be found in the gardens at the entrance.

The wind toy situated on the roundabout at Tahiche is known as Fobos and its the largest of Manrique’s wind toys at 13 metres tall. The sculpture was inaugurated in 1994, unfortunately the Delta Storm that hit the island in late 2005 was too much for the structure and the wind brought it tumbling down. The roundabout was bare for almost a year whilst the sculpture was restored.

It was then taken down again some 12 years later for a restoration, and it was found to be in much worse condition than originally expected. A complete refurb was done and it’s now proudly back in place.

The first wind toy that you see on arrival in Lanzarote is situated on the roundabout as you exit the Lanzarote airport, it was dedicated to José Ramírez Cerdá, who helped César Manrique shape the island of Lanzarote ready for tourism.

This one is located on the roundabout of the road from Tías to San Bartolomé, where you turn off for Montaña Blanca.

These wind toys are very popular for photographers, there are normally cars abandoned at the roadside and tourists dashing in between the traffic to capture just the right shot, so please take care when passing through!