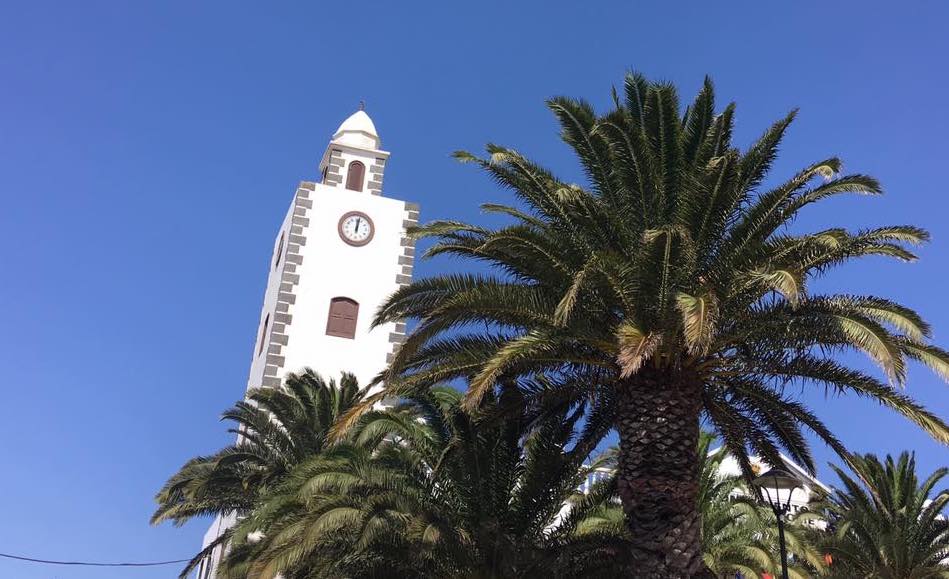 In May here the sun rises at about 7:09AM and sets at about 8:35PM, so we get about 13.5 hours of daylight. The power of the sun is starting to increase, so it’s easy to burn here. Often in May, the morning start a little cloudy, but the cloud tends to burn off and we have hot afternoons and evenings. May is Ironman month on the island, and that’s a typical pattern for the event – cloudy morning and searingly hot afternoon, just in time for the marathon.

The ocean temperature is usually around 22 degrees, so already significantly warmer than the ocean in northern Europe.

It rarely rains in May in Lanzarote, as we have entered our drought period by the fifth month. If it does, it’s generally only a short, sharp burst, and is over within an hour.

May can be quite a windy month here. Normal wind speeds are around 10 to 15KMH, but we often get periods where it gusts to around 40KMH during the month. Stronger winds in May are quite often accompanied by a calima (hot air being blown over from The Sahara) so it rarely feels cold when the wind blows.

May 2021 wasn’t a great month for the island. It was the windiest month we can remember in over 20 years here, blowing constantly from north or north west. A gust of 93kmh was recorded on one day, and 70kmh was common. There was also more cloud than we normally expect in May, but the saving grace was that it was warm all month, usually in the high 20’s and occasionally low 30’s. It was also unusually humid.

May 2020 started poorly – the first two weeks were overcast, although warm. But the second two weeks were superb – pure blue skies and temperatures in the 30’s almost every day. Generally winds were light, although there was a blustery spell in week three.

May 2019 was fabulous for the first two weeks – hot and sunny with temperatures in the low 30’s. There was a slight calima.  The third week was cloudy in the mornings, but sunny in the afternoons and very windy. The last week was wall to wall sunshine!

May 2018 was the poorest May for many years. It was cool at the start of the month, and cloudy for much of it. Typical daytime temps were in the low 20’s, falling to 16 at night.

We had a record temperature here for May, back in 2015, when the temperature reached 42.6 degrees. This came with a calima which lasted several days and we had winds gusting to 65KMH.

We did actually have some rain here in May 2013 – it lasted an hour!

Apart from those, May for the last few years has been an excellent month weather-wise, so you shouldn’t hesitate to choose it for you holiday.

What Should You Wear?

May weather is at least as nice, and probably nicer than full-on summer in northern Europe, so shorts and t shirts and swimming costumes are the order of the day. Even at night, you won’t need an extra layer unless you are very cold blooded, and you certainly don’t need a coat or an umbrella!