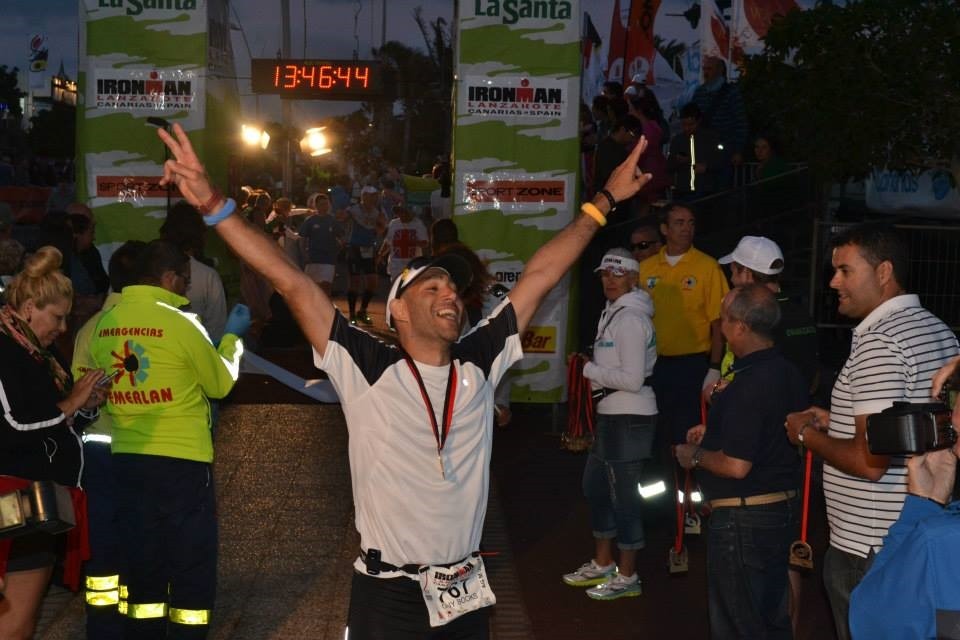 Ironman Lanzarote is held in May, and the 2022 edition, on 21st May will be the island’s 30th edition.

You can watch live coverage of each year’s event here:  Ironman Live.

If you’ve ever been to Ironman Lanzarote, you’ll know it’s a massive competition, with more than 2,000 athletes and close to 5,000 volunteers and officials making it all happen.

Ironman Lanzarote is a triathlon event which consists of a 3.8KM swim, a 180KM bike ride and a 42.2KM marathon – each segment following straight on from the last.

About 50 of those 2,000 competitors are professionals. They will complete the course in somewhere between 8 and 10 hours, and they are dedicated to their craft full-time. The other 1950 are called “age groupers.” They’re people like you and I – most training hard all year while holding down a full time job, and dealing with the cost of entry (€450,) flights and accommodation in many cases and equipment prices that would make your eyes water.

There’s no prize money for them – they get a medal, a finisher’s shirt and the kudos of having competed in the world’s toughest triathlon.

There are around 37 full distance Ironman events around the world. They all consist of a 3.8KM swim, a 180KM bike ride and a 42.2KM marathon.

Lanzarote is the toughest for several reasons – the swim is in The Atlantic, with the swells associated with that, the bike course climbs over 2,500 metres, often into a strong northerly wind and the marathon generally takes place in searing heat.

The drop out rate is high.

So, let’s have a look at the detail, where to watch and what it’s like for an age grouper athlete.

The main event is always on a Saturday, and it all kicks off on the Friday. While the adults are “racking” their bikes in the transition area, the local and international broadcasting starts and the party begins! There’s a race for youngsters, called Ironkids, which takes place on the Friday afternoon.

The transition area is located at the Fariones end of Playa Grande on the main Puerto del Carmen “strip.” There are grandstands, a booming PA and the atmosphere is amazing.

It all happens in that transition area – watch over 2,000 gorgeous bikes being racked, say hello to the athletes, enjoy Ironkids, and buy some cool merchandise.

On race morning, I get up at around 5AM, having struggled to sleep, thanks to my nerves. I try to force as much breakfast down as possible, knowing I will need the energy, but it’s going to be hard going.

I dive into one of the many Portaloos for a final visit before my warm up!

I head to the “transition area” in Puerto del Carmen at around 6AM. There’s always a big crowd there to watch Ironman Lanzarote – some of them have been up all night drinking. I carry my wetsuit and will already be wearing my triathlon suit. I  check (for the hundredth time) the bags which are hanging up in transition, which contain my gear and nutrition for each segment of the race. I go to my bike, pump the tyres again, and make sure my drinks and energy bars are where they should be.

Ironman Lanzarote starts at 7AM prompt, from the beach. When the klaxon sounds, 2,000 competitors funnel into the ocean in “waves2 – it can be chaotic!

The swim consists of two 1.9KM loops, following a line of buoys off shore, for a total of 3.8KM. Athletes swim straight away from the beach, and then turn left and swim along the coast, before turning at around the 800 metre mark, coming back to the start area to run along the beach and over a timing mat, before diving back in for the second loop.

Conditions can vary considerably, according to the wind. It can be a glassy and smooth swim, or there can be an uncomfortable swell. The fastest athletes will do the swim in about 45 minutes, most will complete it in between an hour and 1.5 hours. There is a cut off time of 2 hours and 20 minutes, and any athletes left in the water will be disqualified.

Be on the beach by 0630 – the sun will be beginning to rise. Don’t miss the start of Ironman Lanzarote – it’s amazing to watch! You can then walk along the beach and follow the swimmers, and make sure you’re back at the start / finish area by around 0745 to see the pros running up the beach, making a very quick change and then charging off on their bikes.

Having applied some vaseline to any parts that may rub, I don my wetsuit and walk down to the start area on the beach. The grandstand is full and the PA pumping music out. The start area is about 25 metres from the ocean, and we all have to stand in a certain area based on our expected finish time. Super fast swimmers at the front, and the slowest another 50 metres behind. I’m in the middle, crowded on all sides, but feeling very lonely. Everyone is really crammed together and there is lots of nervous laughter and banter.

The PA builds up to a crescendo and it’s starting to get lighter as the sun comes up. Suddenly, there’s a loud hooter and the race is on! The pros sprint into the water, but for the rest of us, the procession seems incredibly slow – 2,000 people trying to get left to reduce the distance to the first buoy.

Once in the water, it’s total mayhem – there are simply too many people in a small space. The sand is kicked up, so I can’t see anything, and arms and legs are flailing everywhere. Gradually, as the field begins to spread, everyone gets into a rhythm, and things settle down.

There are two loops to be swum – out along the strip, with a turn back to the beach. The first turn is a shock as the sun is up and trying to see where I am going is very difficult. At the end of the first loop, I have to run along the beach and across a timing mat. The noise of the crowd is deafening. And then it’s back into the water for the second 1.9KM. Relative peace, with the only sound my own regular breathing and the water passing over my body.

The bike phase is the killer section of Ironman Lanzarote. The course heads out from Puerto del Carmen, inland towards Tias, then south to El Golfo, before turning north for several hours of climbing into a head wind. All the way to Mirador del Rio, and finally coming back down the centre of Lanzarote and into Puerto del Carmen.

The course is 180KM long and climbs over 2,500 metres. There are nine aid stations along the route, giving athletes, energy drinks, water and fruit.

The pro athletes will take around 5.5 hours to compete the bike course. Most age groupers will take between 6 and 8 hours. The cut off time is 18:30, and anyone still on the course will be disqualified.

The roads are closed wherever the bikes are racing for Ironman Lanzarote, so a bit of planning is required in order to get close to them. The start finish area is a great place to see action, but nothing will be going on there while the field is out. Head to El Golfo or Timanfaya to get some stunning photos against a volcanic backdrop. Drive north to Mirador del Rio, to see a fearsome climb, or if you want to see real speed, catch the bikes on the way down from there to Arrieta.

Be back at the start finish area to see the pro athletes race in, and head out on the run.

Finally out of the water, after more than an hour swimming, I try to get my legs working running on the sand, while getting out of my wetsuit. Into the changing area to be slathered in sun cream by a volunteer and then a jog up onto the promenade to my bike. Jump on and I’m on my way.

The bike course is a killer – climb after climb, eating every 20 minutes on the move to fuel up, and drinking gallons of fluids. There’s a strong head wind all the way from El Golfo to Mirador del Rio. I constantly calculate my time against the cut off to make sure I’m making enough progress.

After 112 miles, I’m finally back into the transition area – just the small matter of a marathon to run!

Ironman Lanzarote finishes with a full marathon – 42.2KM or 26 miles. The run consists of 3 loops along the costal promenade from Puerto del Carmen. On the first, longer, loop the athletes run all the way to Playa Honda, and on the second two, they go as far as Matagorda before turning.

The run course is mercifully flat, but heat is usually the issue as the Lanzarote sun sears down. Incredibly, despite having already swum and biked, the pro athletes will complete the marathon in about 3 hours. Most will take from 4 to 6 hours, and many will finally finish their endeavour close to the midnight cut off.

The transition area is the place to see the first athletes arrive on their bikes and run out. Stay there mid afternoon as there will be loads of action and some great entertainment. Then walk out along the course to see the runners on the road.

Make sure you’re around at transition for about 11:30PM, as the midnight cut off approaches – there are always emotional scenes as the final few finishers make it in time to collect their medals. Anyone left out on the course after midnight is disqualified.

Walking is a struggle after so many miles on the bike, but I gradually get my limbs working in the changing area where my run kit has been waiting for me for so many hours.

Running out into the grandstand, I’m hit by an amazing wall of sound. Within a few hundred metres, it goes quiet and I’m left with my thoughts to concentrate. Aid stations appear every few kilometres and the enthusiastic volunteers are brilliant. The stretch along the runway at the airport is really tough – blowing sand and really, really hot.

It starts to get dark and it’s weird seeing people dressed up and heading for another night out in Puerto del Carmen, while so many of us are still struggling through.

After what seems the longest day of my life, I’m into the final few hundred metres – the famous “finisher’s ‘chute,” at Ironman Lanzarote. The noise from the crowd is incredible, hundreds give me high fives as I run the last part. The commentator shouts my name over the PA, adding the words: “You ARE an Ironman.”

A medal is placed around my neck, the ever present Kenneth Gasque, race director, shakes my hand and hugs me, despite my sweaty state and a space blanket is thrown over me. I wander aimlessly in search of food and try to come to terms with the achievement.

Lanzarote has a huge range of holiday accommodation available, ranging from cheap and cheerful apartments to the most luxurious villas with private swimming pools and Jacuzzis. Deal direct with the owners who advertise their properties on our page and discover Lanzarote from the comfort of your own, private holiday home.