The King’s House In Costa Teguise 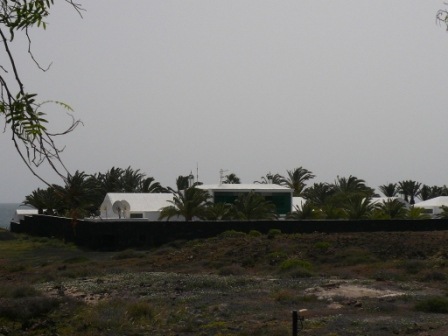 The King’s house (Residencia de los Reyes) is situated on Calle Real, right on the coast at the end of the promenade in Costa Teguise. The house, La Mareta, belonged to King Hussein of Jordan who offered it as a gift to King Juan Carlos in 1991 and it now belongs to the Patrimonial Nacional, but it is available when ever the Royals or their guests want to use it.

The previous King, Juan Carlos, had been on the throne since Franco died in 1975, when Spain once again became a monarchy. He abdicated in 2014 to allow his son to take over.

The royal family stayed at La Mareta in Lanzarote for the millennium New Year, unfortunately Doña María the King’s mother died on the 2nd January 2000 of a heart attack during the stay. She was 89 years old. For many previous Christmas’s, the family had met at the ski resort of Baqueira Beret, but this particular year the grandsons had said that they didn’t want the cold snow, so the family moved to Lanzarote for the festivities.

La Mareta has some great facilities including its own heliport, swimming pool, sports facilities and position with direct access to the sea.

Prince Felipe and Letizia stayed at La Mareta when their daughter Leonor was only 2 months old, you can see photos and read the article in Hola here. There’s also a selection of the royal family photos for Christmas 2005 here.

There have been some other interesting guests, such as…….

You can walk right around the perimeter of La Mareta, or as everyone knows it, The King’s House. Its situated on the Paseo Marítimo (promenade) between Playa Bastian and Playa Ancla in Costa Teguise. You can normally tell when there’s someone important staying in the property, as there are armed police around the resort and the Guardia Civil cutter is patrolling the seas.

Here’s another Lanzarote property with a “story:”  Casa Juanita – the Doll’s House.