The House With The Statues In Teguise 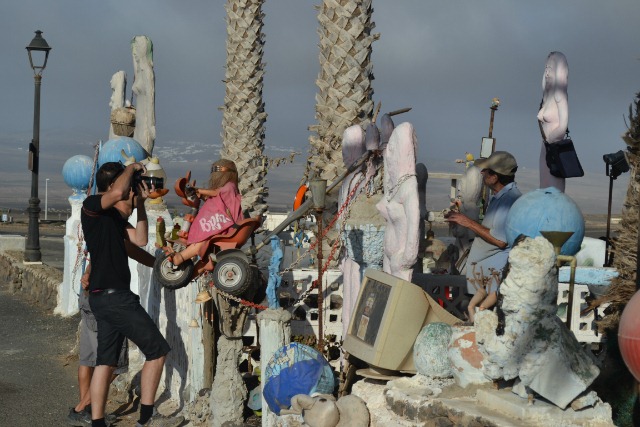 You may not know what it’s called but I’ll bet most of you have noticed the peculiar house with the the statues inn Teguise. This is the work of Don Pillimpo. The house is also known as Museo Mara Mao.

For anyone approaching the Sunday market in Teguise from the direction of San Bartolomé, Pillimpo’s garden is situated on the left hand side after the petrol station, each week hundreds pause to wonder at the sculptures.

This strange collection of statues in Teguise frequently stops passers by in their tracks, cars pause in the road whilst their passengers stare, whilst on foot people stop to browse the chaotic display of figurines. The colour of the statues change frequently, at the moment they are predominantly white with odd ones picked out in shades of grey, green and pale pink.

Researching the artist on the internet there are two names given for him. Some say his actual name is José García Martín whilst the other option is Manuel Perdomo Ramírez. The house is also referred to as the Casa Museo Mara Mao after the statue holding this name up.

The front door is generally open although it’s said the artist is shy of being photographed and doesn’t like people entering his garden. During my visit to take these photos, Don Pillimpo was being interviewed by another photographer, I took advantage of the distraction to have a good look at his exhibition from the safety of the perimeter fence.

Pillimpo takes discarded items and recycles them into his art, it can be a bit disconcerting to see rogue dolls heads daubed with paint and teddy bears chained to the tree but what’s rejected by others has been embraced into this artist’s eclectic display.

Now in his mid 60’s Don Pillimpo is free to use his quirky imagination for us all to wonder at.

Update May 2019. Sadly Don Pillimpo passed away this month. At this stage it is not known what will become of his house and artworks.

Caleton Blanco is a two bedroom apartment in a fantastic position in central Puerto del Carmen. The community has a large communal swimming pool.