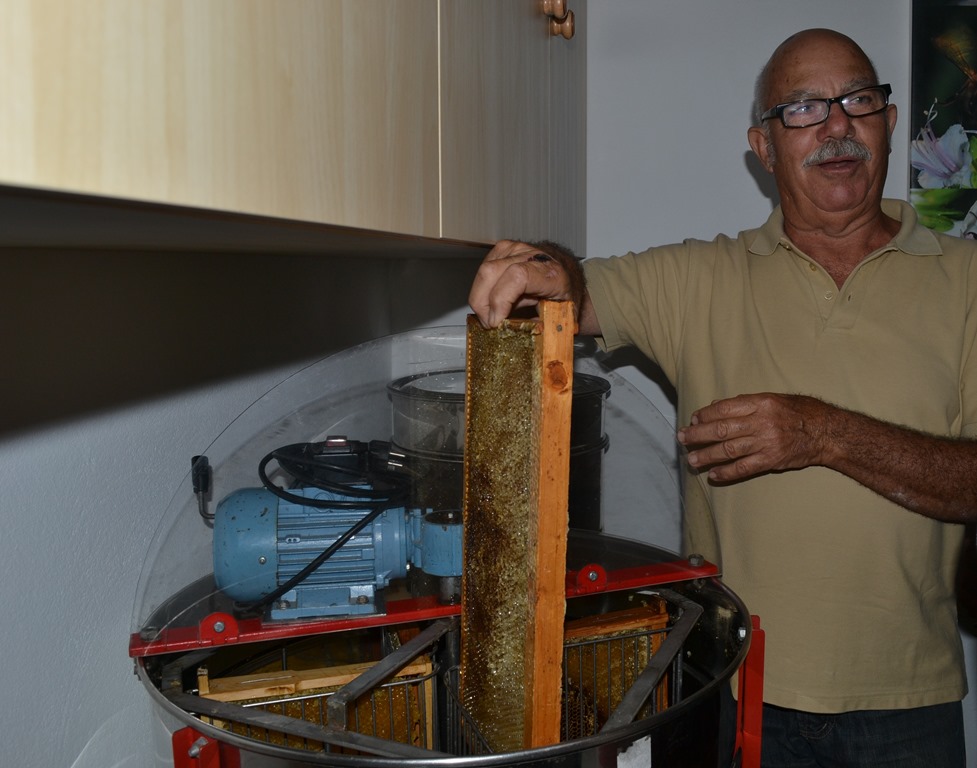 Julie
TO DO, TO EAT

We were introduced to Miguel Galván, the beekeeper, during the third bodega hopping tour with Lanzarote Eco Insider.

Miguel invited the group to tea and coffee on the terrace of his finca situated on the outskirts of La Villa de Teguise. He escorted small numbers of us to see his collection of six beehives at this location. Whilst there, we noticed a wine barrel that had been connected to a hive which was separate from the others. Miguel explained that this was new, he had recently found the barrel with some bees already in residence so he had connected it up to a hive, the bees could be seen busily buzzing up and down the transparent tunnel between the two.

The bees that Miguel keeps are Abeja negra Canaria or Canarian Black Bees in English, which is the species native to the Canary Islands. His first hive was brought over from Gran Canaria and he now has seventeen hives in different locations of Lanzarote. A medium sized beehive will produce around 15 kilos of honey per year. In the beginning Miguel just produced honey for the family, now he sells the excess in specialist shops on the island.

The bees in Teguise are situated close to the house, approximately 50m away and can be seen drinking water from a small pool by the terrace that the beekeeper has made them. The honey we tasted was absolutely delicious, there were two jars on the table, one clear & runny and the other thick & cloudy. We adored the thicker cloudy version and bought a jar to bring home with us. Miguel explained that there was no difference between the two types of honey, the cloudy was just a crystalized version of the clear, which had been stored longer.

We visited Miguel’s preparation room inside the finca, he demonstrated the centrifuge where the honeycomb frames are loaded and spun to drain the honey. Not a drop is wasted, the bees actually clean these afterwards! The honey we bought had been produced with pollen from pumpkin and melon blossom, Miguel plants rosemary and oregano bushes by the hives, the bees also like the native plant Barrilla (Mesembryanthemum crystallinum) and fruit trees.

If you would like to taste this pure honey from Lanzarote, it’s priced at €8 per jar and available from the Pantry at La Cantina and El Herbolario both in the old capital of La Villa de Teguise or La Chocateria in Arrecife.

Here are ten walks you can do in Lanzarote.