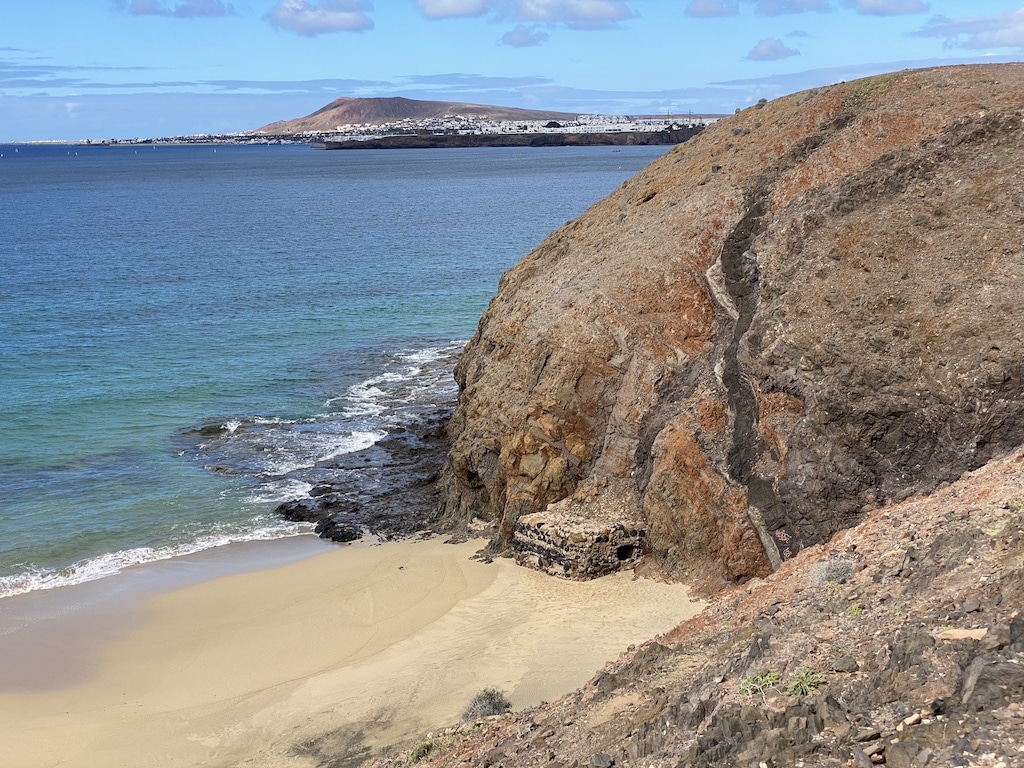 The conquest of The Canaries by Spain was begun in 1402, when Jean de Béthencourt arrived on Lanzarote with a ship full of soldiers. While he and his successors went on to establish Teguise as the capital of the island, and indeed of the whole Canaries for many years, the first place where they established a village was in Playa Blanca, giving them easy access by sea to other islands. They named the village El Rubicón and Marina Rubicón takes it name from it.

Remember, this was long before the Timanfaya eruptions, so the island looked very different to the way it does today. As with all Spanish towns and villages, a church was built, as well as houses, and looking at it today, it must have been an idyllic location. The church was dedicated to Saint Marcial of Limoges.

The village was set in a natural barranco, and wells, or pozos were dug to catch the fresh water coming down from the hills when it rained, providing water all year round.

Location of the beach

Cross on the hill

View from the beach

Walking into the well

El Rubicon had a short and difficult life, being the location of various battles between The Castilians and Guanches, and also being constantly attacked by pirates. The Tower was built to give the towns people some warning of approaching pirate ships, and although nothing remains of the original tower, the Castillo de Las Colorades, built in 1741 to replace it, and remains there today.

El Rubicón was eventually abandoned in the late 1500’s following a particularly devastating attack by British pirates, who destroyed the church. The people who lived there moved inland, and the church staff were moved to Las Palmas.

There isn’t much to look at now, but it’s well worth a visit to see what remains. There’s a cross where the church was, and you can clearly see walls and what may have been foundations of some buildings. But the real gem is the wells, which have not only remained pretty much intact, but they still contain water! They are beautifully built, with walk ways down which people could go to collect their water, and there are even some drawings on the walls, dating back to Norman times.

You access it the area via the Papagayo beach pathway which joins the seven beaches together. the village used to nestle in the barranco leading to Playa del Pozo, which is the second beach along coming from Playa Blanca.

You’ll be able to spot the cross fairly easily, and follow the track down from there towards the beach and you’ll see the wells. They have been protected with white walls and grids, but you can see clearly inside and marvel at the quality of the building work, which has stood up to nearly 600 years of sun, rain and many years of erupting volcanoes!

We did a heritage walk and had the chance to go down into the wells – read about it here: San Marcial de Rubicon Heritage Walk.