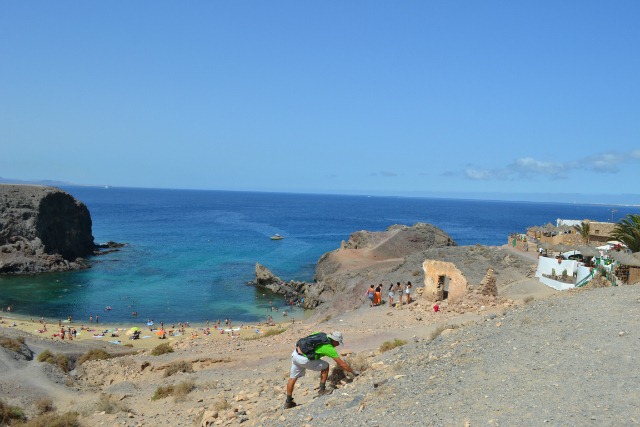 Yesterday I joined a group of thirty volunteers at 9am in the Papagayo area of  Playa Blanca, in the South of Lanzarote. We were participating in a walk to “Connect with the past” along the Ruta San Marcial del Rubicón with Nacho from Senderismo Lanzarote in collaboration with the Servicio de Patrimonio Histórico del Cabildo de Lanzarote.

On arrival in the car park we were given a picnic, a large black bag and a pair of gloves before our first stop on Playa Mujeres. If you’ve been to this beach before, you can’t help to notice the old structure built into the cliff on the far right hand side. This is a horno de cal (lime kiln) where a fire would be lit for 2-3 days to heat the local stone which produced lime, this powder would then be taken from the beach by boat.

We climbed up from Playa Mujeres and along the headland before stopping at the next beach along, here in the barranco behind we discovered the archaeological site of the Pozos de San Marcial del Rubicón. These pozos have been sealed since 1993, but not for our walk as we discovered that Nacho had brought the keys along to open the security grills.

The reason for our gloves and sacks became apparent, we were going into the pozos (wells) to remove the rubbish that had been posted through the metal grids. It was a real shame to see that there was quite a collection of beer bottles and cans, plastic drinks bottles as well as food wrappers and paper tissue to pick up.

There are several theories as to the history of these wells, they are believed to date back to the conquest in 1402. The wells combined the rainwater from Los Ajaches with saltwater seepage and was considered safe to drink.

There are a series of pozos in the barranco, we unlocked each one in turn, with volunteers descending to investigate and collect any rubbish found. As you can see from these photos, despite our really dry winter, although there was no water in this pozo near the beach, it was damp and mossy.

One of the wells was round and quite deep, as there was quite a bit of rubbish at the bottom, a volunteer descended by rope to clean it. The fellas then had to work hard to heave her back up again!

We spent the best part of two hours cleaning the wells and recovered a few sacks of rubbish for our efforts. It was then time to continue our walk, climbing back up onto the headland we found the plaque dedicated on the 7th July 2004 on the XI century anniversary marking the spot where Pope Benedict XIII founded the cathedral dedicated to San Marcial.

The next pozo along was one for the goats, we followed the barranco up towards the mountains of Los Ajaches, still collecting rubbish from the dry river bed, where we found a couple of large deep wells with water.

Sadly there was a lot of rubbish to be found along the roadsides, people had obviously just thrown drink bottles from their cars as well as leaving behind odd shoes and even a swimsuit. There’s no need as in the car park just ahead was a line of bins that these people must have passed before discarding their rubbish.

Nacho found a great spot over looking the Playa de Papagayo where he served coffee and cake to go with our picnic, some volunteers continued cleaning the hillside whilst others chatted and admired the view.

We finished our circular walk of 5km, stopping to pause for a group photograph with our black sacks of rubbish before returning to our cars. What a fascinating morning – we’d learned some history of the island, San Marcial was where the first European conquerors settled, we’d discovered some 15th century architecture and helped clean and preserve an area of local interest and heritage.