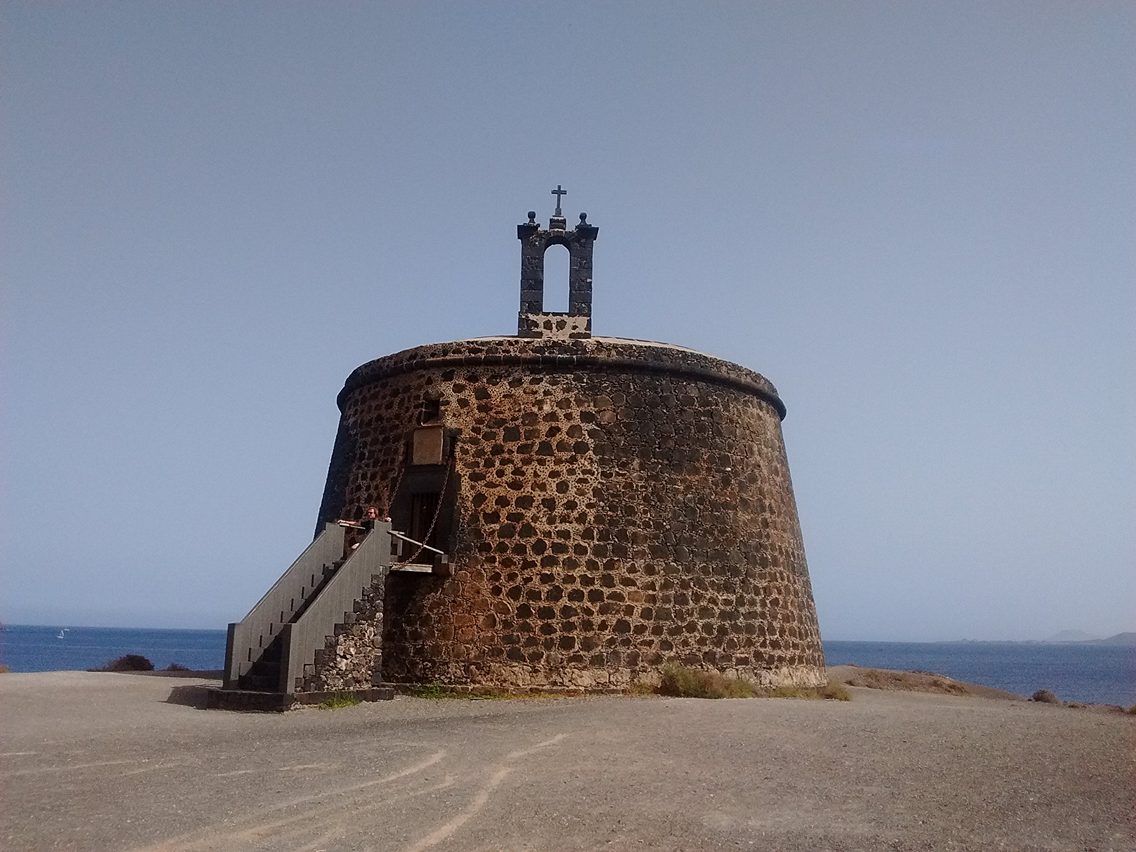 I had seen this castle in Playa Blanca in the distance on several occasions when I have visited the resort so I decided to get up close and personal.

The castle in Playa Blanca is located on the promenade not far passed Marina Rubicón in direction to Papagayo. It can be easily accessed by car too, if you take the Avenida de Papagayo, turn into Calle Velázquez towards the sea, turn first left into Calle Calera and then first right into the very called Calle Castillo del Águila, which is a cul-de-sac. You basically will find yourself parking at the back of the Hotel THe Volcán.

Steps up to the Castle / tower

Inscription above the door

There is a sign giving some information about the castle in Playa Blanca in Spanish, English and German illustrated with reproductions of some of the Castle plans.

Here is the transcript of the English text:

“This is the only defensive construction in the South of the island of Lanzarote, next to El Berrugo salt pans and Las Coloradas Beach.

It was built near the primitive Rubicón Tower (constructed by Jean de Bethencourt during the first settlement of Europeans in Canarias in 1402. It is nowadays historically conceived one of the most outstanding archeological structures in Lanzarote. It was proposed by the engineer Claudio L’Isle in 1741 to defend the area from the pirate attacks that were devastating the Southern coasts. The castle had a drawbridge and lodgings for the troops. The sentries came from the village of Yaiza. It also had two chambers.

During the 18th century the Castle in Playa Blanca was guarded by the Castillians: D. José Feo, D. Juan García del Castillo, D. Pedro Martín Barbosa y D. Marcial Jové Medina and Condestables, D. José martín Barbosa and D. Marcial Trujillo. This castle plan, arisen by militar engineers in 1742, has been preserved by the Militar Geographical Institue. In its whole it is similar to the Tower plans of Caleta de Fuste y El Tostón in Fuerteventura and Gando Tower in Gran Canaria. It should have been the stereotyped design by the militar engineers of the time.

However, it was not finished accordingly as the castle plan shows.  The two chambers for keeping the gunpowder, as in the legend of the castle plan, still exists today whereas the central principal pilar does not.”

In the plan, there is a frontal, a vertical and a horizontal section; it has been pointed two spaces: A: Repto. de Pólvora y B: Argive. In 1749, the tower was fired by Algerian Berbers.

In 1767, all fortresses were inspected and the engineer Alejandro de los Ángeles took out the Águilas Tower plan. The renovation and reforms of the castle were undertaken untl 1769, when it was finished. This year was carved on top of the tower’s door and it has preserved today. It says:

“During the Kingdom of D. Carlos III and under the command of Sir Miguel López Fernández de Heredia Marsical de Campo, this tower was rebuilt in San Marcial, Pto. de Las Coloradas, Punta del Águila in the year 1769″.

In 1846, the Militar Engineers Section gave detailed information of the tower and the tower’s state. It was certified that the materials used in this constrution were: stone blocks as can be seen outside, in the stairs, some parts of the interior lime from the local area, on of the most appreciated from the Archipelago and the Tea wood. The building rooms were one dormitory for the troops, three chambers, one of them a storage room for the gunpowder, a dungeon and two ponds for water supplies. In 1936, the tower was not useful for Military and it was given to the Treasure Department.

In 1978, the General Captaincy offer the tower to Yaiza Townhall, which arose the tower plans so the author of this book that we are consulting for this text, D. Jose Félix Álvarez Prieto and who was in charge of the restauration.”

You can climb the steps up to the door of the castle but the tower itself it’s not open to visitors.

Even though the day that I visited it was quite hazy, the views towards Papagayo on one side and across the ocean towards Isla de Lobos and Fuerteventura were spectacular.  A nice little stop if you happen to be walking along the Playa Blanca Promenade.

Finally, the castle is featured on Yaiza’s coat of arms.