Coat of arms in Lanzarote 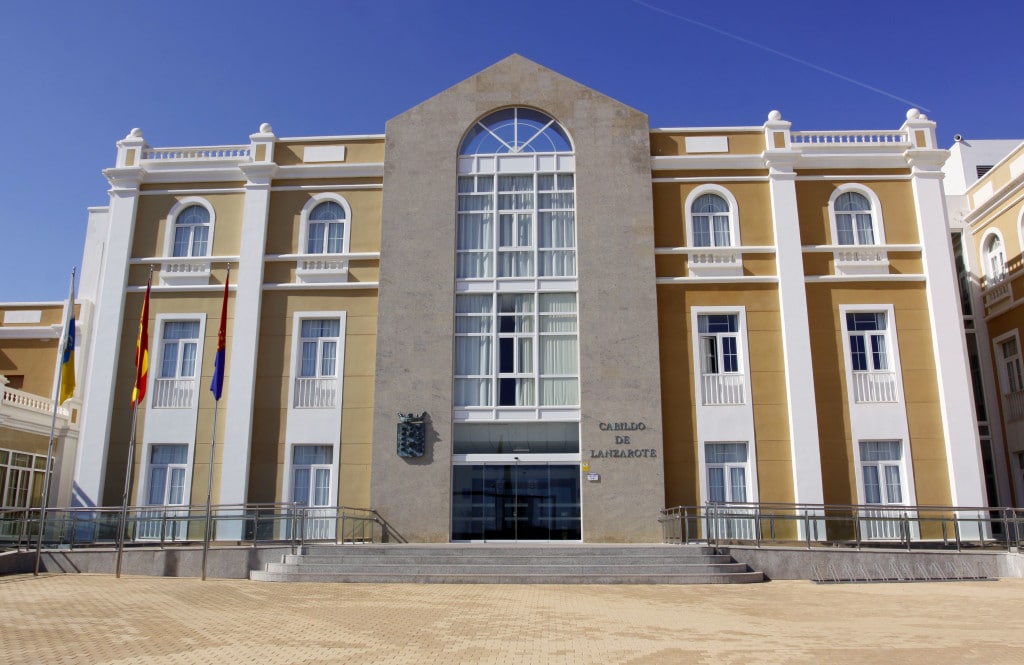 A good while ago I wrote about Lanzarote’s Coat of Arms. It turns out not only the island has one but each municipality has have their own Coat of Arms. Here they are in alphabetical order with a brief description about what they represent:

Arrecife‘s crest is divided horizontally, the upper section in red with two golden cauldrons positioned one on top of the other, holding six green snake heads, with a border also in red with another eight golden smaller cauldrons; the lower section in blue with a silver bird with its wings spread grabing with its feet a golden fish. It has a Marquis’ crown on top of the crest.

The upper half and the crown represent the Herrera lineage, Marquises of Lanzarote. The bird on the lower half looks like an eagle to me, but apparently it’s a “pandión” or “guincho”, a martin, a fishing bird, symbolising the ties between the city, the sea and fishing. This bird sometimes even drowns in the sea, dragged by its prey, is also a symbol of the high price that seamen risk to put food in their plate.

Haría‘s crest is also parted horizontally and then the top half also divided in two, the left side with a silver background and a palm tree in the middle with four smaller palm trees either side and the right side showing a book with a sun above it on a green background. The bottom half on a yellow background it depicts a volcano with blue and silver waves and a compass on top of it all. It’s all bordered in red with four silver albino blind crabs, topped with a closed royal crown.

The nine palm trees symbolise the village and the eight homesteads that form the municipality. The book and the sun represent the eagerness of their inhabitants to learn. The volcano is La Corona which is located in the municipality and the compass represents the Northern location of the municipality in the island. The albino blind crabs are unique to the underground lake in Jameos del Agua.

San Bartolomé‘s has a red background with for golden dunes with a silver shell with four black sticks, a feathered helmet with a gridded visor. It’s bordered in silver with four vine leaves and the inscription “Ajei”, topped with a closed royal crown.

The central element is the coat of arms of María Andrea Perdomo Guitérrez and they are present at the homestead that her husband Francisco Tomás Guerra Clavijo, militar governor of Lanzarote, built at the end of the 18th century in Morros del Cascajo. The dunes represent the coast of San Bartolomé. “Ajei” recalls the name of the primitive aborigine settlement in the vicinity of which church dedicated to Saint Bartholomew was built, which gave name to the town. The vines leaves represents the grape growing tradition of the area.

Teguise‘s crest is divided horizontally, the top half in blue with the outline of a city in silver, topped with an open royal crown and the bottom halve with blue and silver waves with four golden rocks, three on a first row and the last one underneath. The shield is topped with a closed royal crown.

The city outline represents the urban centre of Teguise and the four rocks, the smaller islands of the Chinijo Archipelago. The crown symbolises the fact that Teguise is a Royal Village since the 16th century.

Tías‘ crest is also divided horizontally, the top half in blue with a boat and two cauldrons with green snakes heads and a candle over silver and blue waves. The bottom half with a red background shows a piece of pottery depicting a Canarian wrestling scene. Topped by a Marquis crown.

The boat represents both the island conquerors and the devotion to the Virgin of the Candelaria that they brought with them, which became the Patron Saint of the municipality, also represented by the candle. The cauldrons are taken from the coats of arms of the Herrera family, Marquis of Lanzarote, also depicted by the crown. The pottery piece symbolises the love for tradition and for the local sports.

Tinajo‘s crest is parted horizontally and then the top half divided in two: on the left, eight black and silver chimneys and on the right, on a silver background, a camel and a palm tree. The bottom half on a blue blackground features a volcano with an red escutcheon with an image of the Church de Los Dolores. All bordered in red and with an open royal crown.

The chimneys represent the eight neighbourhoods of the municipality, being also a very distinctive element of the architecture of Lanzarote. The camel and the palm tree are representative of the flora and fauna of the municipality in which the Timanfaya National Park, represented by the volcano, and the Church of Los Dolores are located.

And last, but not least, Yaiza‘s crest which is also parted horizontally with the top half also divided in two: on the left on a red background, there is a silver tower and on the right, a golden key and crosier, crossed. The bottom half shows a volcano with golden and red flames on a green background. It’s topped by a closed royal crown.

The tower depicts the Castillo de las Coloradas or Torre del Águila, built in 1741 as a defence against pirates while the key and the crosier are attributes of Saint Marcial, patron of Lanzarote. And obviously, the volcano is representative of the ones in the Timanfaya National Park.

You will mainly see each municipality’s crest on the headed paper of every Town Hall and on most of the promotional posters of local events organised by each town.

If you are anything like me, once you start to notice them, you won’t be able to stop spotting these symbols everywhere. Happy coats of arms spotting!