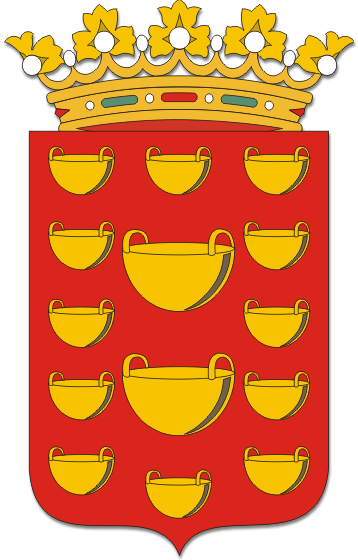 I had seen Lanzarote’s coat of arms on several occasions, especially on posters for events organized by the Cabildo de Lanzarote. I was intrigued by its design so I searched for more information, and this is what I found:

The design consists of two large gold cauldrons in the centre with a border of another twelve smaller gold cauldrons against a red background. Originally the cauldrons were supposed to be checked in black and gold, but they have always been depicted fully in gold.

It represents the coat of arms of the Herrera lineage, one of their branches had the “Señorío” (Lordship), afterwards “Marquesado” of Lanzarote – hence the Marchis’ crown on top of the crest.

The title of Marquis of Lanzarote dates back to the 16th century, which makes it even more amazing that the crest’s design was only legalized in the 1960s, as per the “Boletín Oficial del Estado” (BOE) of the 29th of July, 1964 by the Decree number 2217/64.

And now I see it everywhere: the Teatro Insular, the Biblioteca Insular and the Conservatorio y Escuela de Música in Arrecife, even on street signs!