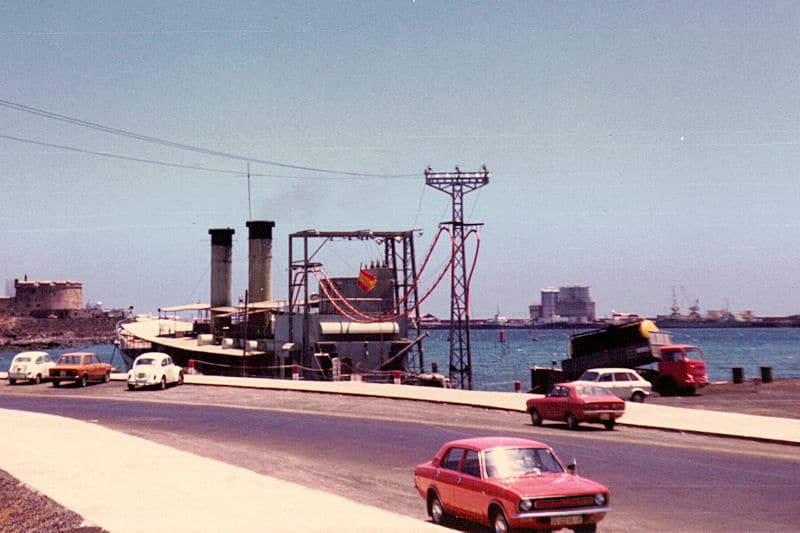 Did you know that a World War 2 frigate supplied electricity to Lanzarote between 1973 and 1981? Older residents tell stories that they would check out the smoke coming from the ship to predict what the supply was going to be like – if it was very black, they knew a breakdown was coming, so everyone would buy candles!

Let’s have a look at the story of the ship and of Lanzarote’s electricity supply:

During the 1950’s and 1960’s electricity for the island was supplied by a private company, Antonio Armas Curbelo Electricity. The supply was generally available from 7pm to midnight, and at 11.45PM, the supply would be reduced to warn everyone the power would soon be going off.

After the construction of the desalination plant in 1964, a new electricity “factory” was created, but it still didn’t generate enough power to provide electricity to the whole island, and could just about manage Arrecife and the plant.

The ship was built in Masachussets in 1943 and was named USS Oswald, but she was soon handed over to the British Royal Navy as part of the lend / lease agreement between the two nations. She served with distinction during the war as the frigate HMS Affleck, and destroyed a number of U Boats, as well as supporting the Normandy landings in 1944. Later that year, she was hit in the stern by a torpedo just off the coast of Normandy, and almost sunk. The crew managed to summon a navy tug and Affleck was towed onto the shore on the British coast. Although refloated after repairs, she was not used by the Royal navy again.

In 1949, the ship was refurbished in Antwerp and remodelled as a power generation vessel, using the steam turbines as electricity generators, and sold to the Spanish government. Renamed Nuestra Señora de la Luz, she was used in various parts of the peninsular of Spain, before being moved to Santa Cruz de Tenerife in 1962, where she served faithfully for 11 years.

By 1973, Tenerife had adequate power supply from the power stations that had been built, and Señora de la Luz was moved to Arrecife, where she was hooked up to the island’s supply system to supplement the existing power supply. She was moored at Puerto Naos and connected to the grid, supplying power to the island until she was finally disconnected in 1981.

Without any fanfare, Señora de la Luz was towed to Cadiz, where she remains in a Spanish Navy dockyard, having served three navies over nearly 40 years and supplying electricity to countless thousands.

Photo: Web de Lanzarote. Looking at the Morris Marina in the foreground, we would guess the photo was taken after 1974.

Did you enjoy this article? If it’s your kind of thing, you should consider subscribing to our famous weekly newsletter: