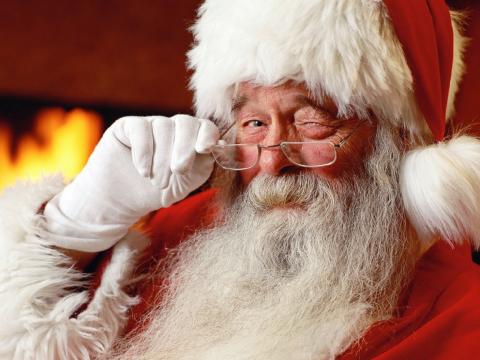 This article was written in the lead up to Lanzarote Information’s first Christmas, back in 2008.

For this new website, I wanted to create a real splash and interview someone very, very special, and appropriate to the time of year, I sent a letter to the north pole and asked if there was any way I could interview Santa Claus for readers of the site. I did ask if he could come to Lanzarote for the interview, but as Santa is extremely busy at this time of year I had to fly to Rovanemi in Lapland to meet him.

I had been warned about the cold, and wore my warmest jacket, but the chill on stepping out of the aircraft took my breath away. As I walked towards the terminal building a high pitched voice said “Hello, Miguel!” Startled, I looked around and only saw my fellow passengers. Again I heard “Hello, Miguel!” This time I looked up, and there, sitting perched on the tiled roof of the building was a small elf. I was so surprised that all I could think of to say was: “Hello there”. The elf disappeared in a cloud of sparkles and reappeared a split second later next to me. “Welcome to Lapland, on behalf of Santa Claus and the team.” he said, “Follow me”. We walked into the building, and the strangest thing happened. As we entered, we immediately exited into a car park, without passing through any building at all! I spluttered: “But, what about customs and passport control…..and my suitcase?” “Don’t worry” said the elf, “It’s all taken care of”. And sure enough, there was a sleigh backed into a parking space, with my suitcase strapped to the back.

The elf opened the door to the sleigh and picked up a blindfold, saying “I’m really sorry about this but nobody is allowed to know exactly where Santa lives, so you’ll have to wear this. By the way my name is Jasper” I put on the mask and heard him shout “Let’s go Roger!” in his high little voice. “Roger?” I asked. “Yes, Roger is Rudolph’s brother, he leads the B team. Their job is to run visitors around and stand by at Christmas in case anyone gets injured in the A team. The ride lasted about 20 minutes, and was eerily smooth. In fact it was almost as if we were flying, but I suppose it was just very smooth snow.

All of a sudden we came to a dead stop, and Jasper told me to take off my blindfold. We were in a huge cave, and I was suddenly very hot in my big coat. All around were elves busy packing and wrapping boxes of presents. As far as I could see there were conveyor belts and huge rolls of wrapping paper. Jasper lead me to some stairs and into a cosy office with a roaring log fire and said “He’ll be with you in a minute”.

I noticed a huge book on the table with millions of names written in tiny handwriting. I was just starting to look at it when I heard a deep, rich voice say “Hello, Miguel”. I turned around and there was Santa Claus himself, but he hadn’t come in through the door as I had been facing it. I said “How did you get in behind me, Santa?” He just smiled and looked towards the fire place.

Santa Claus has been visiting Lanzarote for just over two thousand years. He comes to the island every year without fail, although he describes it as a working trip, and a very brief one. He always ensures that he gets around the whole island, but his favourite places are the Montañas Del Fuego, which he says “Are good for navigation.” He says the climate is not really to his liking as even in mid-winter it’s a little too warm for him and the reindeer. Their usual route is to head straight across the Atlantic after visiting The Canaries, so that everyone can cool down a little over the sea.

At that point in the interview, Mrs Claus came into the room, carrying a tray laden with cakes and a huge tea pot. She smiled jovially as she poured tea into a huge mug for Santa Claus, and a normal sized one for me. “Hello, Miguel” She said, and offered me a slice of delicious chocolate log. “Santa was telling me that you’ve come from Lanzarote, and that it’s very hot there.” I told her that it stays nice and warm all year round, and asked her where she went on holiday. “We only have one holiday a year, and we always go to a secret lake near the pole. We go every August.” She said mysteriously, “Of course on Christmas Eve, Santa goes off without me, and I stay here running mission control.”

Santa Claus went on to tell me that the couple had no children, although he feels that all the children of the world are theirs in a small way. I asked him how he managed to get around all the houses all over the world, and he just smiled enigmatically and said: “That, Miguel, is the magic of Christmas!”

I asked the couple about their plans for retirement, and they explained that the grotto has magical properties that mean that everybody, animal, human and elf who lives there, simply lives forever. So that means they won’t ever retire and they’ll just carry on doing their job as long as there are children on the planet. “Which of course will be forever.” Said Mrs Claus.

All too soon, and with so many questions left to ask, Jasper came into the room to tell me that my allotted time was up, as Santa Claus was so very busy. Santa saw the disappointment on my face and asked Jasper “Are the A team ready for their workout yet?” “Yessir.” Replied the little elf, “All hitched up and ready to go!” Santa beckoned me to follow him, and we went through a passageway and came into another huge cave. A massive sleigh was in the middle of the room, and a full team of Reindeer were straining against their harnesses and being fussed over by a group of elves. Santa said “To make up for not giving you more time, I’ll give you a lift home. I need to give the boys a good run tonight.”

We jumped aboard, and the elves stepped aside as we shot towards a huge stone wall. At the last minute, when I was sure we were going to crash, the wall simply disappeared, and we were out in the open heading towards the edge of a huge cliff. Every instinct was telling me to close my eyes, but I kept them open and saw Santa reach into a bag hanging from his belt. He pulled out a handful of sparkling dust and threw it over the reindeer. I saw Rudolph’s huge red nose lift up and sniff it, and suddenly we were airborne, flying smoothly and quickly through the night sky.

We gathered more and more speed and I saw Britain flash beneath me, then France, then Spain, with the peaks of the Sierra Nevada flashing white. Everything became a blur then, until we seemed to stop dead. Looking down I saw the Timanfaya Mountains, and there in the distance the windmills on Montana Blanca, slowly turning. We did a quick circuit of the island, with Santa pointing out The Mirador Del Rio, the black sand at El Golfo, and then we shot across to Haria. I told him the story about a palm tree being planted for every child born in the town, and that the area was now known as “The valley of a thousand palms.” He laughed a huge belly-laugh and said “I’m so pleased they took me up on my suggestion!”

We flew slowly back across Lanzarote, with Santa gently chiding Donner and Blitzen for trying to go too fast. As we came to Arrecife, Santa steered the sleigh over the sports stadium, and pulled up directly over my house. He looked me in the eye and said “Have a very merry Christmas, Miguel. I’ll see you on Christmas eve, but you won’t see me.” He opened the door of the sleigh and a long ladder materialised from the top step. I took one step onto it, and was magically on the ground in front of my house. I quickly looked up, but all I could see was a faint trail of disappearing sparkling dust. As I turned the key in the lock I distinctly heard a deep cry of “Ho, Ho, Ho!”

To all our readers, thank you for visiting www.lanzaroteinformation.co.uk Have a very merry Christmas and a safe and prosperous new year!