Peace After The Storm 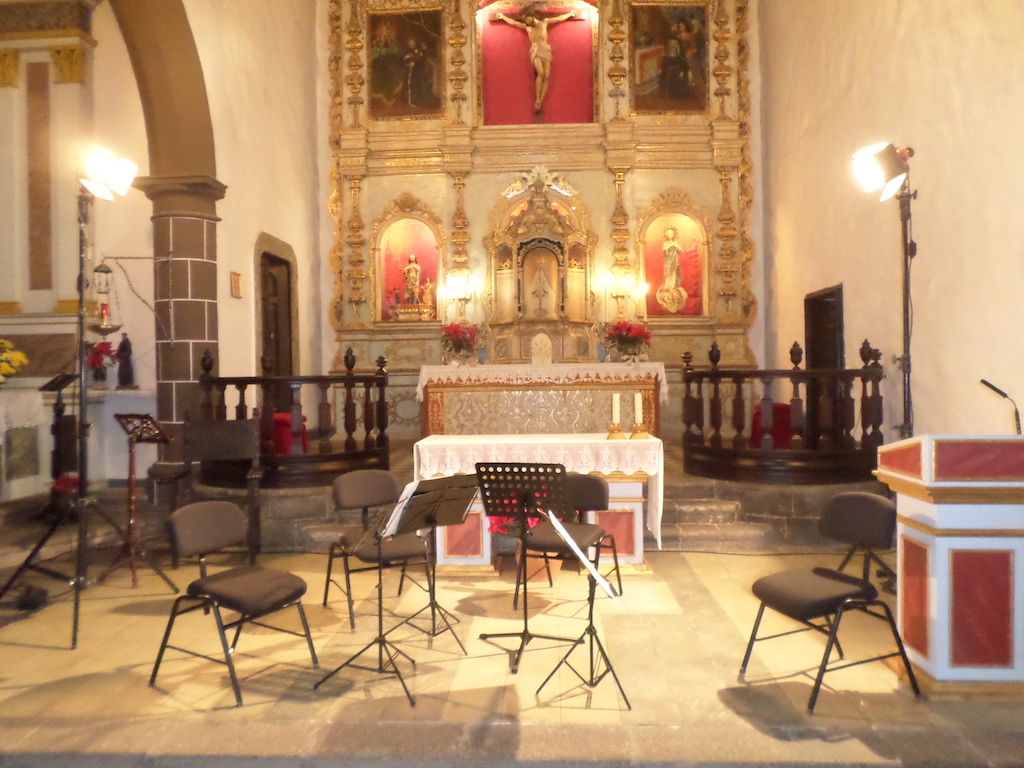 The road over Timanafaya is always beautiful in the sunshine and even on clear evenings, in the moonlight, you can still see subtle shifts of colour on the mountain sides, and the distant lights of civilisation, in Tinajo at one of the road or Yaiza at the other, twinkle invitingly.

On a recent Sunday evening, however, it seemed that there was a bad moon rising and that the bad weather that had been threatening all day was about to break. The blast chose not to begin, though, until the heavens opened precisely as we turned North on to the road, and suddenly all was hell and high water. Wind roared, the clouds smothered the moon and stars and swirling, belting rain played havoc with our vision and any sense of perspective, as the road sides blurred into grey shadows. What usually seems a long, straight journey became one of hills and twists and turns. Rainwater was pouring down the road surface within seconds of the storm starting, rendering the brakes almost untouchable.

We were the only car on the road, except for the idiot who drove twenty feet behind me all the way, presumably so he could follow my red lights. Of course, to add to the apocalyptic feeling of it all, he kept his lights on full beam shining into my rear view mirror and dazzling me. Dee was tightly gripping her door handle and saying nothing whilst I tried to reassure her by doing my usual trick of nonchalantly ´whistling past the graveyard´ as Tom Waits would have put it. We survived of course and, as we drove through the town approaching the church, the wind breathed its last, the rain relented and the clouds drew back the curtains and the moon smiled and said hello.

I was hoping the bobby-dazzler driving behind me might follow me into the car park at the church of San Roque so that I could rage at him as the storm had raged at me, but no, he carried on past me, presumably to annoy some poor unsuspecting motorist further up the road.

Dee had sat even more tight-lipped and fearful than she normally does through my driving and as we parked and stepped out of the car she uttered her first words for about twenty kilometres.

We had made the journey to hear a classical performance by Cuarteto De Cuerdo Quiroga, who won the National Music Prize in 2018 after the jury highlighted the players as the leading chamber ensemble, with the most involvement in spreading contemporary Spanish music, with their “expressive sensibility and ornate tone”. Quarteto De Cuerda Quiroga were to deliver the opening Lanzarote concert of the 35th Annual Canary Islands Festival Of Classical Music. The piece about them in the advertising literature had suggested these were among the foremost players in the emerging generation of great classical musicians, so I had every hope that they would make Dee’s roller-coaster ride seem worthwhile.

However, we had arrived early, despite the slowness of our journey, and at this stage the church door was closed and there were no fellow travellers in sight anywhere. Nor is there an abundance of bars or restaurants to tempt gathering audiences inside, a point I shall return to later. We huddled against the wooden doors to shelter from the still cold air, but suddenly the doors were opened from inside and a kindly lady put a programme in our hands.

´Come in,´ she said, ´I’ll give you shelter from the storm.´

San Roque is a massive church, being long, wide and high ceilinged. The altar is a deep area with a huge crucifix high in the rafters of a back wall that, like all the rest of the building, is adorned with some incredible religious iconography. There are huge paintings representing biblical scenes, many in glorious techni-colour but some of them dark and foreboding. All of this lends gravitas to the classical music occasionally performed here and we have always enjoyed previous visits to these concerts.

Within minutes, as if by magic, there more than two hundred and fifty people sitting in the pews and any late comers to this ´free until full´ concert could find ´standing room only.´ Very quickly, though all were safely gathered in and, only minutes later, Cuarteto de Cuerda Quiroga stepped out to the chairs and music stands set in place on the altar floor. The three men, the players of violins of various shapes and sizes, were suited and booted with crisp, white shirts and monochrome ties and the female cellist in a black dress. The quartet members are all resident musicians in the Palace Real Madrid, with responsibilities for its prestigious Stradivarius collection.

Their first performance piece here was a selection from Joseph Haydn who, they told us, wrote music for performance in the palaces and in public. They suggested that although he always wrote to ´entertain,´ Haydn was not afraid to use his compositions to make political and social comment. Many other experts say he was one of the early pioneers who helped shape classical music.

There was immediate evidence here of the cello lending depth to a violin section and sending its music soaring to even these high ceilings. As if to emphasise their observation of Haydn as an occasional voice of protest, there were discernable outbursts of musical anger amid the beautiful melodies and the Vivaci Finale was noticeably frenetic. The Cuarteto De Cuerda Quiroga had shown us, in this opening selection, that their reputation as first rate musicians is well earned.

The Hungarian, Bela Bartok, was considered by many to have been one of the most important composers of the twentieth century. His music here was immediately more restrained, more sombre than the Haydn selection we had heard, until, eventually, it seemed as if the composer had released the shackles and suddenly his music rejoiced in freedom of expression.

There were moments that implied a threat or danger of some kind but for the most part the opening element was of calm and respite. The second Bartok piece raced along and was notable for the use of pizzicato techniques until, in this offering, the cello became more sonorous as the violin music became more confidently soft and gentle, as if somehow feeling protected. All this erupted into a wonderful playfulness in the final selection from Bartok with the violins, in unison, being picked in a mischievous pizzicato fashion.

Los ojos del espejo, a piece by Cecelia Diaz Pestano was introduced as being reflective of the landscape and lifestyle of The Canary Islands, and it certainly proved to be cinematic in scope. Again, there was much use of pizzicato, but this was much more of a soundscape than the work by the previous two composers. The music sounded more modern in many ways, and yet at the same time sounded like it might be music from the very birth of our planet. Sounds, although always rhythmic and percussive, seemed to be being scratched and torn out of the instruments to describe an earth born to an uncertain future and then discovering a life of joy and exultation.

In listening to this clever and intricate musicianship I was reminded, thematically, of a duo called Soco that we saw perform last year. With miramba and cello they, too, had created music that, like this, seemed to spring from the land. They recorded, and slightly embellished their self-penned work on an album called Mantra, and it would be wonderful and intriguing if there were a recording of Cuarteto de Cuerda Quiroga playing this work by Cecelia Diaz Pestrano so that we could compare and contrast two pieces seemingly addressing the same subject.

The last of the four composers included in the programme was the greatly talented Argentinean composer, Alberto Evaristo Ginastera, who was born in Buenos Aires to a Catalan father and an Italian mother. He took private lessons in music as a child; then entered the National Conservatory of Music in Buenos Aires, where he studied composition.

I made a note that the first piece of these final selections, by Ginestera, opened ´with aggressive urgency´ and when I came to type up these notes I conferred with the programme of the event and it stated the piece to be ´Allegro violento ed agitato´ which is, I guess, just what I was trying to say. That the second piece was played vivaciously before subsiding into poetic calmness would be a fair description too, I think, before the Cuarteto played us out beautifully with the final piece of the evening that offered us a glimpse of rural tranquillity, and brought the concert to a gentle close.

Loud and sustained applause twice brought the players back to the stage to take another bow. Although I have no acquired skills that might allow me to objectively compare the quality of these musicians to others in their field, I can say, subjectively, that this had been the most enjoyable performances of its type that I have seen.

I also noted not only the size of the audience but also how so many nationalities seemed to be represented amongst its number. There were, also, certainly three, and maybe even four generations in evidence. Dee and I also saw several friends present, too, including a number who sang at the recent Christmas Voices concerts.

It is a feather in Tinajo’s cap that it can put on such busy, large concerts and draw such crowds to more than one venue in the town. However, what a shame it was that three hundred or so visitors to the town, who came to hear a free concert, couldn’t divert some money into a local bar or restaurant.

If there were any open on the night they didn’t make themselves known, and it would surely have been a great opportunity for any such business to massively increase its takings for the week. A bit of more closely joined up thinking could have made this a memorable and profitable event for the whole town.

So, it was back to our home in Playa Blanca for a light supper of Horlicks and hob nob, to drift off to sleep with memories of a great concert, knowing that come the morning we would be looking on You Tube and searching Amazon for recordings by the group.

There are CDs available of their Mozart interpretations and, amazingly, You Tube footage of Quarteto De Cuerdo Quiroga playing Pachelbel´s Canon In D, which has been one my favourite classical pieces ever since my musical hero, the late American singer-writer John Stewart, put lyrics to the piece and recorded it as a song called Louisianne.

So, I guess this will be played a few times here in Casa Normandee until we move on to Teatro St Bartolome to hear the next performance of the Festival, by The London Conchord Ensemble.

You can see the Quarteto performing in this video.