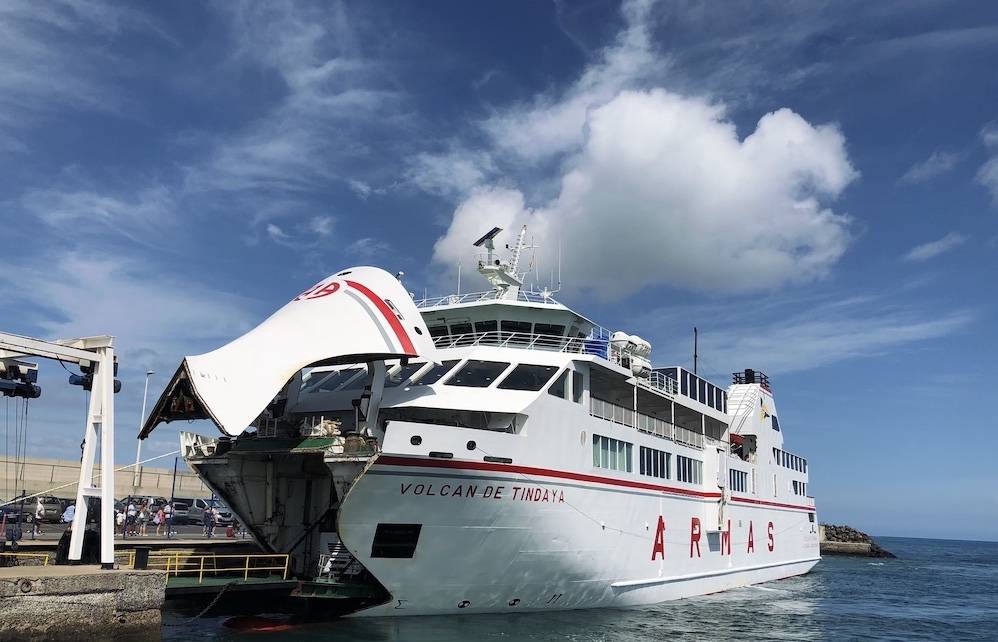 Naviera Armas was established in 1941 so this year it’s celebrating it’s 80th anniversary. We thought it might be interesting to look a bit more into the history of what has become the most important shipping company in the Canary Islands and the fourth largest in Europe!

Its founder Antonio Armas Curbelo was born in 1899 in Yaiza. He worked in the salt pans and exported its produce to Las Palmas on board of boats he rented, until in 1941 he bought the “Astelena” hence starting his trajectory as a shipowner.

In the second half of the 1950’s, the company’s definitive start as a shipowner of motor, steam and steel-hulled vessels took place by incorporating the “Concepción Aparisi” and “Rosita Soler” vessels to the fleet, with which it began the relationship with the Sahara. During this decade, it also acquired the ships “San Bartolomé”, “Puerto de Valencia” and “Andrés Rial”. At the end of the 1950s, Antonio Armas Curbelo’s fleet consisted of nine vessels: three motor vessels and six motor sailboats.

In the 1960s, Antonio Armas Curbelo had already become the leading shipowner in the Canary Islands, both in terms of number of vessels and tonnage capacity. During this period, he incorporated the ships “Medina Tanya” and “Marijé”.

1963 was an important year for the shipping company with the incorporation of four new ships: “Polensa”, “Puerto de Burriana”, “Puerto de Denia” and “Barreras Puente”, which were then the largest in its fleet. They made connections with the Sahara, mainland Spain and countries such as Italy, Algeria, Tunisia and Morocco.

On 6 March 1966, the limited company Antonio Armas Curbelo S.A. was finally incorporated in Arrecife de Lanzarote. In the same year, the ship “Antonio Armas” was acquired, becoming yet again the largest in the fleet.

In 1967 the vessels “Polensa Tercero”, “Lashercia” and “Golondrin” were bought in the Basque Country. Other ships incorporated in the 60’s were “Riva”, “Felipe”, “Ramales” and “Musel”.

In 1973 Antonio’s son, Antonio Armas Fernández, took over and gave a new direction to the company, being the pioneer in the introduction of the “roll-on/roll-off” type ships in inter-island traffic.

The evolution of ro-ro traffic in the Canary Islands led to the decision to expand and renew the fleet with the incorporation in 1983 of the vessels “Volcán de Tamia” and “Volcán de Tinache”.

In 1992 the first “Volcán de Teneguía” arrived, being at that time the largest vessel in the company’s fleet. –yet again! The commercial network was extended, with a presence in Mauritania, Cape Verde and mainland Spain, thanks to its fleet and some chartered ships.

In 1995 Naviera Armas made a significant change in the company’s strategy by introducing passenger traffic and the construction of two ships: “Volcán de Tauce” and “Volcán de Tejeda”. A new era began, which corresponds to the starting point of the company we know today. This year the Playa Blanca-Corralejo route began with the first “Volcán de Tindaya”.

In 1999 the Armas Cruceros experience began, with daytime round trips to various islands carried out by the ship “Volcán de Tenagua”.

In 2000, the first attempt was made to provide the Canary Islands maritime transport with a high-speed monohull vessel with the “Volcán de Tauro”, purposely built in Italy.

A new phase began in 2003 with the incorporation of eight ferry-type vessels, all newly built and with an investment of more than 800 million euros.

From 2006, Naviera Armas breaks into passenger and vehicle transport on high-speed vessels with the incorporation of the catamarans “Volcán de Tirajana”, “Volcán de Teno” and “Villa de Agaete”.

Another important milestone is the purchase of Compañía Trasmediterránea in 2018, making Naviera Armas the leading shipping group in Spain, and the fourth largest in Europe, both in number of ships and passenger movements.

The expansion continues in 2019 with the incorporation of the “Volcán de Tagoro” and in July 2021, its twin the “Volcán de Taidía” arrived all the way from Australia. These last two vessels are the most modern and advanced in the world in their category, placing the Canary Islands at the international forefront in high-speed maritime transport.

Join us in congratulating this company that has gone from strength to strength providing and adapting to the transport services required for the region.

Something tells me that, sooner rather than later, if their trends continue, they are going to need (yet) a bigger boat!