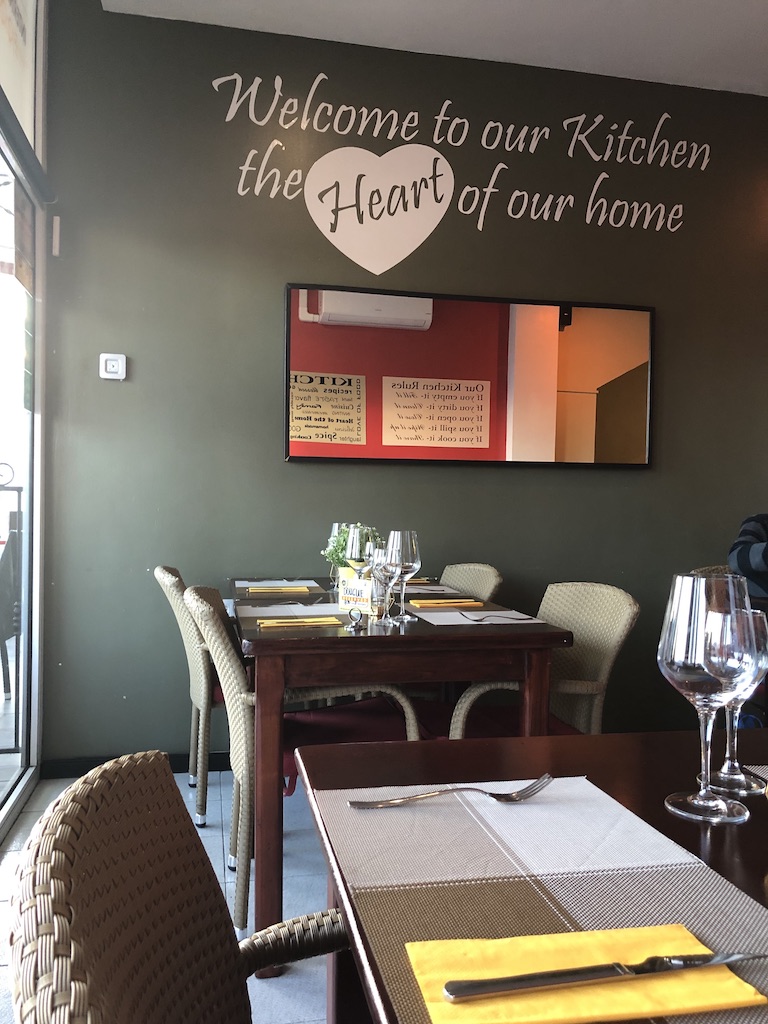 We reviewed the restaurant when they were in their old premises in Calle Teide in Puerto del Carmen. They have now moved to a new location.

We visited My Kitchen Julius with friends on their recommendation.

It’s a fairly small restaurant, with tables outside and inside, and is decorated in a clean, modern style. The menu is limited, but I don’t think that’s a bad thing – I would always choose a place that does a few dishes well, rather than one that does many poorly.

The service was really warm and friendly, and by the end of the meal our waitress felt like a good friend. A nice touch was that our names were on the reserved table when we arrived.

My Kitchen Julius is a barbecue restaurant, and top quality meat is on display as you walk in, and there’s a lovely smell of wood fired barbecue.

Our friends recommended the fish and sea food soup, so Julie went for that and described it as really tasty, full of flavour with big prawns and mussels in it – a meal in itself!

I went for the Caesar salad, going for a lighter option as I was going for the mixed grill as my main. But I hadn’t read the description properly, and when it arrived, it too, was huge. It was actually Caesar Salad with chicken, and it came with several pieces of delicious southern fried chicken, as well as the usual salad and parmesan, with the addition of a couple of boiled eggs. It was fabulous, but again, enough for two people.

After a short gap, our mains arrived and my mixed grill was absolutely amazing. A lamb chop, a chorizo sausage, a rib and a mixed skewer of chicken and steak, beautifully seasoned and smoky from the barbecue, served with sauté potatoes and some very al-dente vegetables. A genuine meat fest, and I enjoyed every mouthful.

Julie chose lamb chops, and she prefers them well done, which isn’t fashionable, but it is how she likes them, so that’s what she asked for. And a stack of perfectly cooked chops arrived served with the same accompaniments. She also loved her meal.

We wouldn’t normally go for desserts after such large starters and mains, but our friends sold us on the idea, and Julie chose apple crumble with custard. She was a little disappointed in the crumble, although it was obviously home made, but it wasn’t warm enough. The custard though was fabulous – creamy and full of vanilla flavour.

I had a chocolate brownie, which was super tasty, but had too many nuts in it for my taste.

All in all, a really good meal, and I’d highly recommend My Kitchen Julius. Looking at their reviews, it seems I’m one of many.