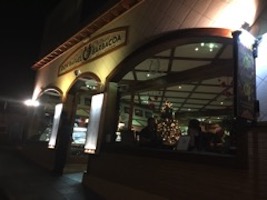 We’d heard good things about the steaks to be found at Don Rafael Barbacoa Grill, so when we met up with friends in December, we decided to give this restaurant in Puerto del Carmen a try.

It’s situated on the Avenida de Las Playas, the front entrance on the strip is Cantina, a Mexican restaurant, the BBQ Grill restaurant entrance is on the side street Calle Doramas, you can actually walk through one to reach the other.

The interior of the Don Rafael Barbacoa Grill has a ranch theme, with lots of artefacts displayed on the walls. The furnishing is a mix of heavy wooden furniture and cream tiles giving a warm and clean perspective on entering the restaurant. The kitchen and grill is an open plan area at the front, with fresh meat on display.

We were eating early evening, so the restaurant was fairly empty when we arrived, it was filling up nicely by the time we were leaving. All four of us simply wanted steak, so we didn’t order starters or desserts.

There’s an impressive choice of steaks available on the menu including novillo, migñon, prime rib and chateaubriand. However, all four of us opted for the barbecued entrecot steak “Don Rafael” which is a 350 gram steak served with a garnish and crinkle cut chips. The potato choice with meat dishes includes jacket potato or wedges, if chips are not for you. There was also a choice of sauces available.

It was a good steak, I wouldn’t go as far as to say it was the best steak I’ve ever had, but it was beautifully cooked and tasty. The service was courteous and prompt, it was lacking in atmosphere but I put that down to eating earlier in the evening and the few patrons dining at the time.

There’s an interesting choice of dishes on the menu, I could eat here again on a few occasions and not have the same thing twice, and you can’t beat meat cooked on a grill.