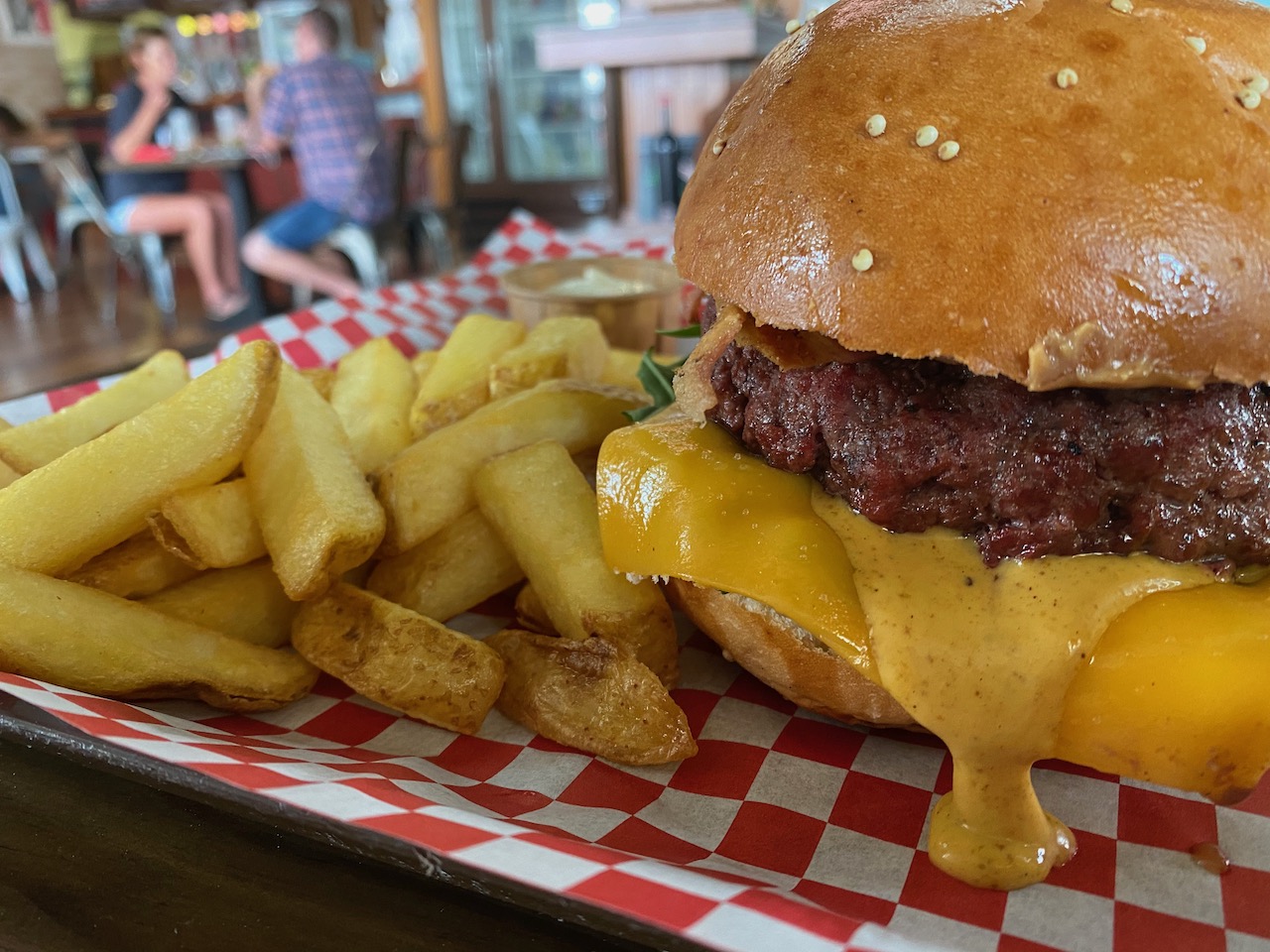 Update October 2021: Chacho has opened another branch in Arrecife, next to the cinema at Charco San Ginés. We ate there recently, and enjoyed the same excellent food and service as we did in Playa Blanca. Recommended.

Chacho Fresh Burger was recommended to us by some friends, so we decided to try it out while we were in Playa Blanca for other meetings.

We found the restaurant easily enough, but parking in the area was a problem, so we ended up driving around a few times before we could get a space.

There are a few tables outside, but as it was a hot day, we chose to eat inside – the air conditioning is excellent. After a friendly greeting, we were told to sit wherever we liked and directed to a QR code for the menu.

The decor in Chacho Fresh Burger is very modern, and the theme is the movies, so there is movie memorabilia and images all over the place. It was very clean throughout, and although we arrived a few moments after opening, there were plenty of staff on.

The menu follows the movie theme, and as you’d expect, burgers dominate, although there’s a choice of hot dogs and sandwiches too. There’s also an extensive beer menu, with some we’ve never seen before on the island.

We both elected to try the Berlin dark beer, which was malty and delicious, and Julie chose a Back to the Future Burger, while I went for a Fast ‘n Furious.

The burgers at Chacho Fresh Burger are obviously home made, and the standard one is 200g, although there were larger ones available. Julie’s had an intriguing peanut butter sauce, while mine was described as spicy picante. Both were delicious – served in proper burger buns, the meat cooked to your liking, and stuffed with salad, tomatoes and onion and with extra sauce on the side. Chips come with each dish, and they are freshly made and tasty. We ordered a side of onion rings and they were light and crispy with a BBQ dipping sauce.

Coco whip with the bill

Chacho burger joint in the centre of Playa Blanca

Back to the Future Burger

My burger came with a thick slathering of guacamole, lots of salad, and with aioli and the hot sauce on the side. The sauce lived up to it’s name – very spicy and delicious! Julie chose hers because she was curious at the ingredients – peanut butter, cheese, bacon, caramelised onion & mango curry sauce as well as salad. She loved the combination, which all worked well, and with no one flavour overpowering the others.

We both agreed they were the best burgers we’d ever had in Lanzarote.

The service at Chacho Fresh Burger was excellent and fast, I’ve already mentioned how clean the place was, and that extended to the rest rooms as well, which were immaculate.

Prices are reasonable, although this isn’t a McDonalds – these are hand made burgers. Our total bill was around €30,  but the artisan beers are quite pricey at €5.80, so it would be easy to reduce the price.

The bill arrived in a video cassette case, which was a funny touch, and we were presented with complimentary coconut whips in chupito glasses, which cleansed the palate beautifully, and were a lovely surprise.

In summary, top class burgers, great service and a lovely ambience – we’re happy to recommend it too.

Chacho Fresh Burger is situated on Calle la Corriquia in Playa Blanca and they are open from 1330 until 2230 every day except Thursday. They offer a take away and a delivery service.