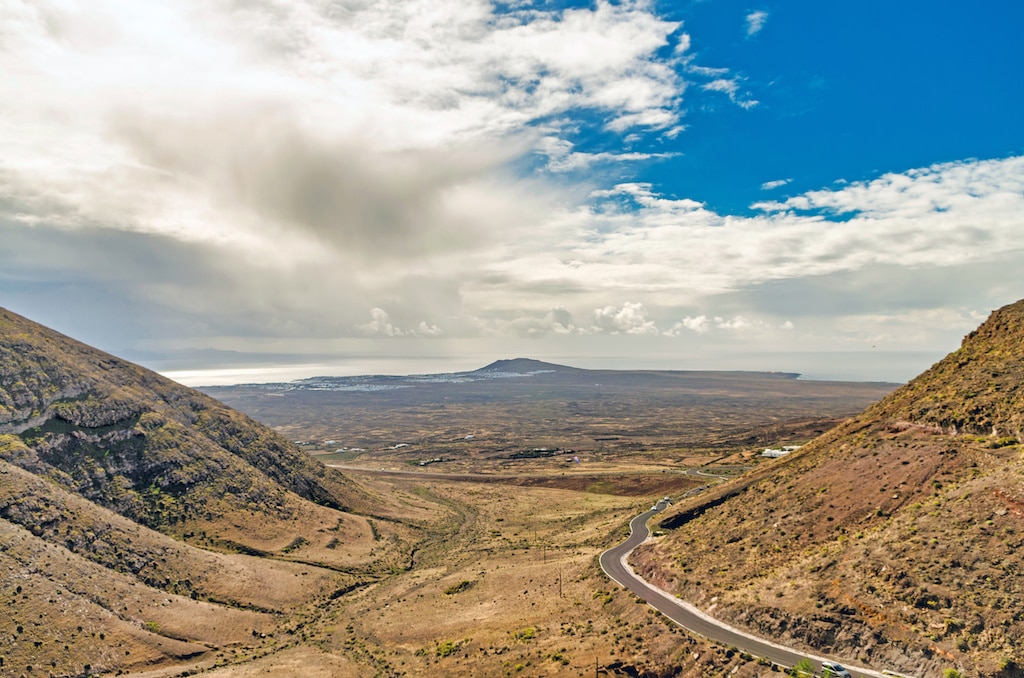 The village of Femés is nestled at the top a valley on the border of the fabulous mountains, Monumento Natural de Los Ajaches and perched overlooking Playa Blanca and the Bocaina Straits.

The accent on the second “E” means you should put the emphasis of the word there, so it is pronounced fem-ess. See How to pronounce Lanzarote place names.

If heading to Playa Blanca at the roundabout just before the village of Uga take the third exit and head up into the mountains, the first part of the village is situated at one end of the valley and is called Las Casitas Femés, here you can find the very distinctive house with the helicopter parked in the garden, its blades were blown off during Delta in 2005. It was originally built as a carnival prop some years ago.

The road then winds through the fertile valley and uphill to the main centre of Femés. This village was once the hub of the island for goats and people would head from all over Lanzarote for their milk and cheese products, there are still a couple of houses that continue the tradition of goat herding and cheese making.

For a small village Femés has a good choice of restaurants to eat at there’s Bar Restaurant Femés which is popular with the locals and set away from the view, Casa Emiliano has the view and a lovely garden area (a favourite of former Irish Taoiseach Bertie Ahern) and then the bar restaurant set onto the balcony.

If this is your first visit to Femés as you arrive at the main village, follow the road around the church and park, you need to get out and appreciate the absolutely stunning panoramic view from here, watch the cars make their way up the winding road, spot the masts of the yachts moored in Marina Rubicon and out to the Bocaina Straits with the coastline of Fuerteventura and Los Lobos in the distance.

There are lots of walks from this area heading through the Los Ajaches down to the coast and Playa Quemada and its a popular route for cyclists, the road up from Playa Blanca is a long climb but the view from the top’s worth it! Just below the village is Las Breñas which has a distinctive red and black pícon mountain.

Currently cyclists are prohibited from using the twisty hill road up to the village from the Playa Blanca end of Femés.

Femés is so much more than just a shortcut to Playa Blanca, take the opportunity to stretch your legs, enjoy the view and maybe some tapas at one of the local restaurants.

If you like “off the beaten track” places in Lanzarote, you may want to join Club Lanza Info -. the club for Lanzarote lovers – where we regularly do trips to places many tourists don’t go. Find out more: Club Lanza Info.