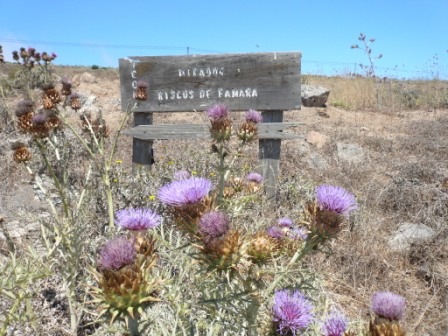 The 42nd running of the Orvecame rally is this weekend, with 61 competitors racing. Scrutineering is on Friday from 1500 to 1900 at Recinto Ferial in Arrecife, with the cars departing from their at 2100 for the first, 20KM night stage. On Saturday, they will be racing a further six stages, with the prix giving back in Arrecife at 1600. Details here: Rally.

A paraglider was rescued by the La Graciosa catamaran after he crashed into the ocean while flying over the island. emergency services said it was fortunate that he came down close to the boat, who were able to pull him out of the water uninjured.

Astronauts from the European Space Agency are currently training in Timanfaya for future manned missions to Mars and The Moon. They are learning to interpret volcanic activity by studying the geology of regions like Lanzarote and the Vesuvius area of Italy.

AEMET has issued a yellow alert for strong winds from 6PM this Thursday. Winds of up to 70KMH are expected, with waves of up to 5 metres. The alert will last until midnight on Thursday.

Vaccinations To Start 15th December For 5 to 11 Year olds

Covid vaccinations will start for 5 to 11 year old children in Spain on 15th December. Unsurprisingly, this group, which has not yet been vaccinated, has the highest rate of transmission Spain currently, and it is expected that the special, smaller doses of the vaccine will slow down the number of new cases, particularly with the Christmas holiday period coming up.

The Prosecutor’s office has asked the court for a sentence of 6 years in prison for someone acting as an estate agent. It’s alleged that she retained €67,000 of clients money paid over for a property she didn’t have any intention of completing the sale on.

Rockfalls on the road to Los Hervideros in the south of island have resulted in the road being closed while technical reports are collated and action taken.

A body was found in the water between Puertos del Carmen and Calero on Monday. The man had a head injury and was removed from the water by Emerlan, after being reported by a sports boat. Nothing further in known at this stage.

The first case of the Omicron variant has been detected in The Canaries. The man had recently returned to the island from South Africa, and is currently experiencing mild symptoms.

€5 Million Will Be Spent On Christmas Lottery

Lanzarote’s lottery shops are expecting to sell a record €5 million worth of tickets for Spain’s famous El Gordo – the world’s largest lottery.

Atlantic Rowers Get Ready To Depart

Several teams of rowers will be departing this month from La Gomera, before rowing 3,000 miles to Antigua, as part of the Talisker Whisky Atlantic Challenge. A total of 38 teams are taking part, either as solo rowers, in pairs, trios or fours.