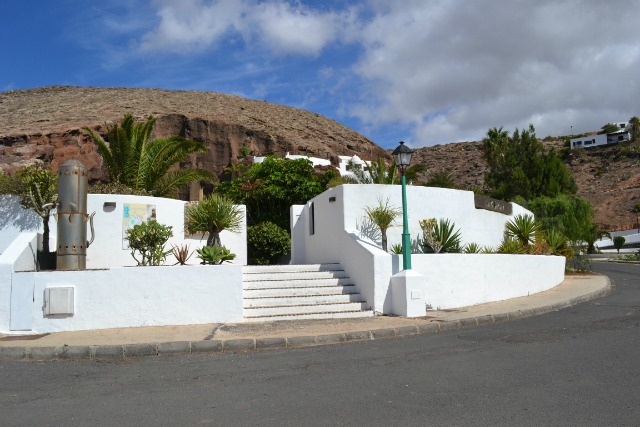 LagOmar has a fascinating history and is an attraction in Lanzarote worthy of a visit when exploring the island.

Nestled into the hillside in Nazaret, LagOmar is a museum, art gallery, bar and restaurant which first opened to the public in 1997.

In the 1970’s a British property developer Sam Benady constructed the property as a show home for people interested in purchasing properties in the area of Oasis de Nazaret. The idea to create the house within the quarry with exposed stone walls and white washed concrete in a style reminiscent of One Thousand & One Arabian Nights was conceived by César Manrique and carried out by Jesús Soto.

Legend has it that Hollywood actor Omar Sharif was in Lanzarote filming L’Île Mysterieuse, the Jules Verne classic of The Mysterious Island of Captain Nemo, Omar fell in love with the house and bought it. Sam Benady knowing the actor’s penchant for cards challenged him to a game of bridge where upon he lost the property, not knowing that his opponent was also the European Bridge champion. The house has since been known as “Casa Omar Sharif” after it’s one day owner who left Lanzarote never to return.

The house is set into the hillside with different levels and some magnificent views, there are information plaques explaining the history in English as well as photos of the house during construction displayed. The lounge is dedicated to Jesús Soto with information and awards he’s received for projects completed in Lanzarote.

Entry to the museum and attraction in Lanzarote is €6 for adults and €2 for children.

LagOmar has the Manrique feel of other attractions in Lanzarote with smooth white walls, lots of character including natural elements of stone and wood. Little pathways lead through gardens into tunnels, caves, up and down stairways, there’s even a water tunnel with stepping stones.

It’s a shame that free entry to LagOmar has been stopped, it is now necessary to pay on reception even if you just want to visit the gardens or Bar & Restaurante on site.

Book a tour to LagOmar and La Graciosa.