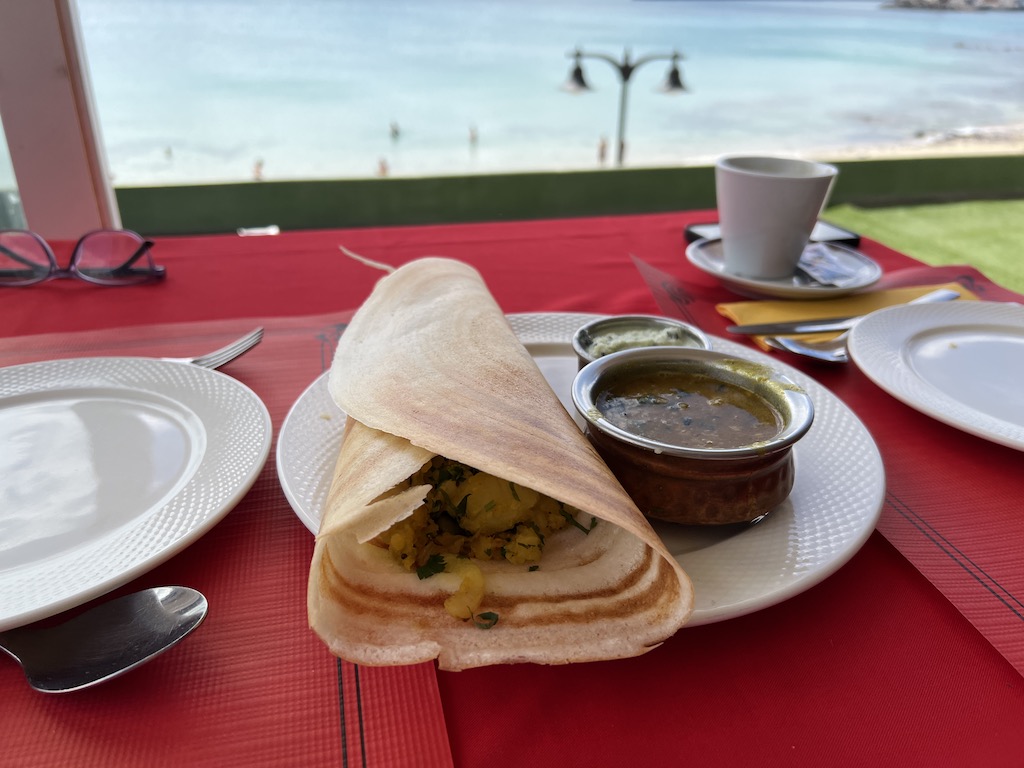 We’ve enjoyed an excellent meal at Indian Delights in Playa Blanca, but we were intrigued when they told us they were now offering an Indian breakfast, so we went along to try it out.

Indian Delights is right on the ocean front in Playa Blanca, and we were shown to a table right at the front and looking down onto the promenade and town beach. The location and layout of the restaurant is very good, and the space feels clean, cool and beautifully appointed.

The waiter asked if we’d tried an Indian breakfast before, and when we told him we hadn’t he explaIned a little about the dishes.

To start off with we had a Bun Maska, which is a very light bun, sliced and with a layer of slightly sweet butter, which looked whipped. It was served with Masala Chai – sweet tea with milk, and lots of spices. Both were absolutely delicious.

We then decided to order three other dishes to share:

The absolute star of the show and it was stunning! A light crispy Dhosa, which is a sort of pancake made after the batter has been fermented, stuffed with Masala potatoes and served with a curry sauce with lentils and a zesty chutney.

These are steamed bread cakes and are served with Sambar, a lentil curry, and a coconut chutney. The cakes were so unusual, almost like dumplings, and they married perfectly with the sauce and chutney. Very filling!

This is a deep fried snack made with Sago, peanuts, potatoes and herbs and served with yet another chutney. Lovely and crispy, and so tasty!

The staff took a lot of time to explain each dish, how it was made and which part of India it was from.

It was an excellent experience, and we both enjoyed it so much that we promised ourselves we’d visit regularly when we’re in Playa Blanca in the mornings.

Our bill came to €34, and we had ordered two bottles of water with gas. There was a lot of food, and we could easily have managed without one dish, as well as the water, which would bring the price down to just over €20.

They serve breakfast every day except Tuesday, from 0900 until 1200.