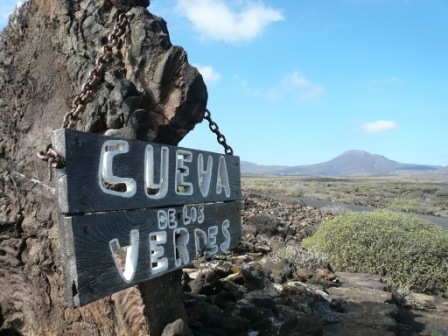 I’ve always heard the Cueva de los Verdes referred to as the Green Caves in English, however translated ,it is the cave of the greens and when our guide said to us “Have you seen any green during your visit to the cave so far, apart from my uniform?” he had a point, we hadn’t,  he went on to explain that the cave was named after the Green family (Verde in Spanish,) who were goat herders and used to shelter in the cave with their animals.

Another point that I hadn’t taken in properly during my first visit was that the eruption from the volcano La Corona was some 3,000 to 5,000 years ago and therefore not part of the six year Timanfaya eruption back in 1730. In fact the cave was a sanctuary during the 16th and 17th century, the islanders used to hide in the intricate tunnel system so that marauding pirates couldn’t find them. During the vicious attack in 1618 from Tabán Arraez and Solimán (Calle Sangre in Teguise) the locals lived in the caves for two months whilst the pirates searched the island for them.

The Cabildo de Lanzarote recognised the historical importance of the cave in the 1960’s and appointed Lanzarote artist Jesús Soto to help with the design. Very little of the tunnel was disturbed, the main part of the work required was to form the entrance and exit areas. Jesús Soto managed to provide both ambient lighting but also ways of dramatically highlighting the textures and colours found with the tunnel.

Our guide was speaking in both English and Spanish, he explained that we were standing in a volcanic tube which was formed when lava flowed from Mount Corona to the sea, this lava tube is over 6km long and up to 50m high and 15m wide in places. We learned that a lava tube is left when the top of the lava flow cools and forms a crust but the current continues underneath. There are some interesting names for sections of the tube such as Pie del Guanche (Guanche’s Foot), Cabeza del Monstruo (The Monster’s Head) , La Cripta (The Crypt) and Horno del Diablo (The Devil’s Furnace).

During the tour you will visit the natural auditorium which hosts classical music concerts throughout the year and the surprise of the Cueva de los Verdes will be revealed, the guides are still amazed that this feature remains a secret despite being open for more than 45 years!

The attraction of the Cueva de los Verdes was first opened to tourists back in 1964, the tour is through a 1km section and lasts about an hour. In order to preserve the original tube and to demonstrate the spectacular features, the passage can be dark and narrow in places, there are some stairs, uneven floors and there are sections where you need to walk doubled over due to the low ceiling and you need to take care not to bump your head! This attraction is not suitable for wheelchairs or pushchairs although young children are welcome they just need to walk or be carried. The temperature in the cave is not cold, it has natural ventilation and maintains a temperature of 19 degrees.

The opening hours are from 10am to 6pm with an hour extra in the evening during the summer months, you will be told the amount of time to wait until the next tour departs when you arrive, and the last tour leaves an hour before closing. Entry is €10 per adult and €5 per child (aged 7-12). Residents are entitled to discounted prices with proof of residencia and ID.

NB. Not suitable for visitors with poor mobility or wheelchair users.

Looking for more things to do in Lanzarote?