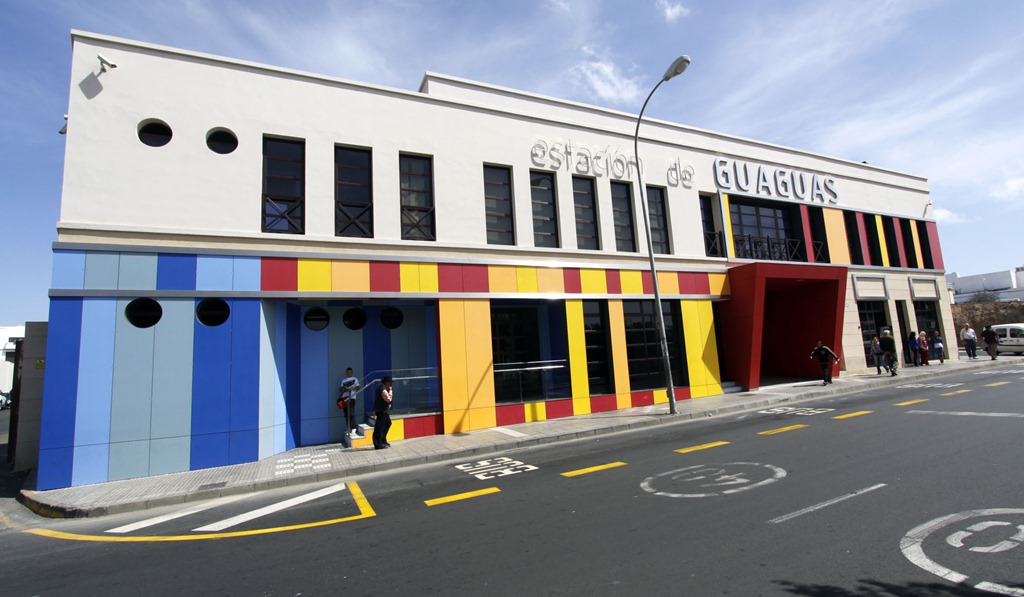 It’s great to hear that lots of you are taking advantage of the local bus service in Lanzarote. I thought it might be useful to post photos of the two main bus stops in the capital of Arrecife and explain where they are in relation to the shops and attractions so that you know what to look for.

The bus station is called the Estación de Guaguas, this is situated on the Rambla Medula which is a dual carriage way road with a tree lined pedestrian section in the middle. When travelling from Puerto del Carmen through to Costa Teguise the bus stops on the other side of the road to the station, just past the shopping centre Centro Comercial Arrecife.

It isn’t straight forward to find the centre from here, the most straightforward route is to walk along Calle Puerto Rico next to the shopping centre, at the end turn right down the hill on Calle Doctor Gómez Ulla at the traffic lights where the petrol station is in the middle of the road turn left which becomes Calle Fajardo. There are some interesting shops along here, follow the road along and round to the right until you reach La Plazuela where the Animal and Benetton shops are, here walk left and you will meet Leon y Castillo and the sea front.

The Intercambiador is situated on the sea front, next to the Cabildo in Arrecife. This is the best bus stop to disembark for exploring Arrecife, simply walk along the beach front at Playa Reducto, past the high rise Gran Hotel, along Parque José Ramírez Cerdá until you reach the pedestrian street Leon y Castillo that connects the castle San Gabriel. From here you can explore Arrecife, the old part of Charco San Ginés and the Recova Market are to your right.

There is a discount card which allows 20% off each journey. The rechargeable card is called “Bono Bus Lanzarote” and can be purchased for €12 (€2 intial fee for the card and €10 credit)then topped up in €5 denominations to a maximum of €50. Available from the Intercity buses or Arrecife Bus Station.

The two bus stops are marked by red dots on the map below. If you miss the Intercambiador you can walk back from the station along the Rambla Medular.

Read about buses from Lanzarote Airport.