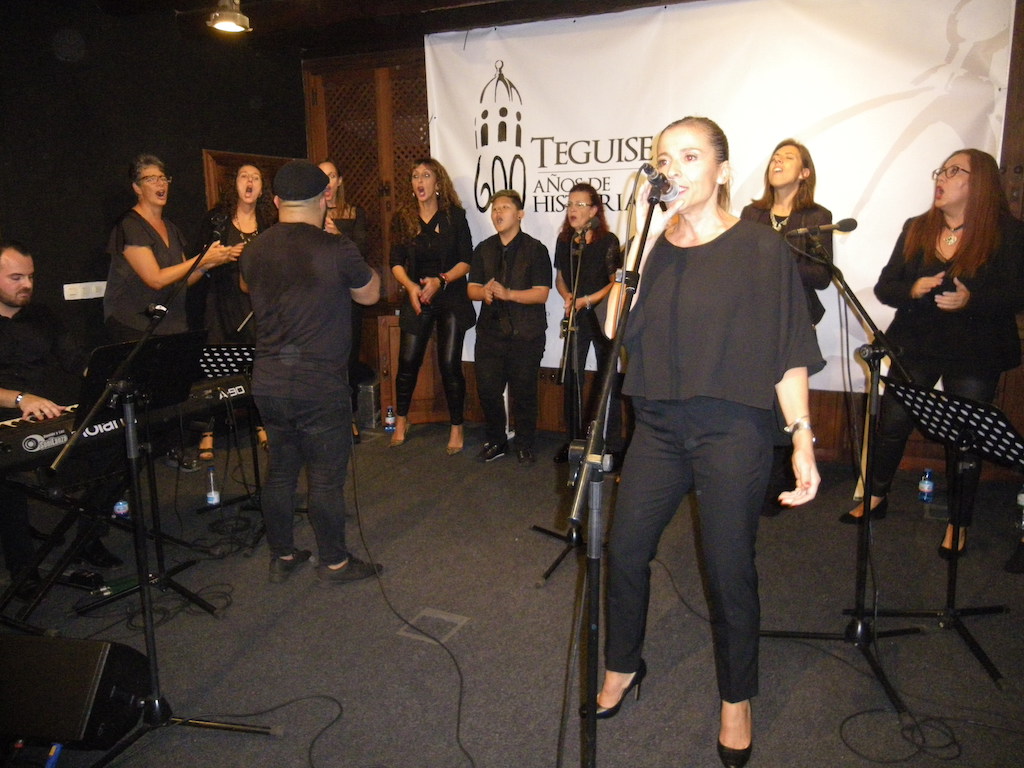 It seems strange to have lived here on the island long enough, (three years this week) to see projects, learned of at their outset, coming to fruition and to now be able to look forward to acts I have seen before.

Last week for instance, my wife Dee and I attended a performance and presentation celebrating the 30th anniversario of Coral Polifonica.

Having arrived early as usual we had time for a hot, tasty and inexpensive meal in the wonderful La Palmetta Bar. This venue seems wonderfully Bohemian and had become a favourite haunt of ours. Holiday makers and residents all turn up for the Friday music nights in this atmospheric place that presents live bands playing jazz and blues fusions starting at 8.30. So far we have only witnessed the bands setting up their equipment before we have had to set off on other duties. However, recordings of the likes of BB King, Howlin Wolf and Miles Davis are piped through the speakers, so we are determined to mnake a trip back soon to bring you a review of these nights.

Meanwhile, though, we were happy to walk back across the square in Teguise to the Casa Museo Del Timple, a venue in which we have now seen a dozen or so gigs, many of them funded and free to the audience. We have commented here previously how historic and sacred is this small, intimate concert room and how safe and quiet is the town itself. This concert venue, however, can rarely have witnessed any show so joyous and so energetic and can never have known an audience to become so totally involved that they almost literally ´joined´ the choir in making music.

There were six standing vocal microphones and an electric keyboard on stage when the choir of eleven females and one male singer strode through the hall and up on to the slightly raised platform.

They were accompanied by two other male colleagues, in their piano player and their incredibly charismatic musical conductor.

He made an introduction, in Spanish, that seemed to suggest we might be hearing many different genres of music tonight, including Eurovision ! He then insistently began a rhythmic hand clap, encouraging the choir to join in, and then turning to the audience he urged us to clap along, too, as the choir burst into a loud and melodic version of Freedom, the gospel song, not the George Michael composition. Like several numbers would be this evening, the song´s opening verse was delivered by a solo member before all the choir then joined her for the rest of the song, with the director adding repeat verses and sustained endings seemingly at will.

His penchant for doing this certainly kept the choir constantly on their toes and energy levels high, but their second song was a slower, if equally soulful sound, with Let Me Wait For You being one of the highlights on a night full of highlights.

The ladies, all dressed in black clothing with brightly coloured boots or gold and silver necklaces sometimes as accessories, shimmied and swayed along to the music. They were, every one of them, always smiling and, in this number, seemingly ecstatic to declare I Am A Friend Of God. The musical director, also dressed in black but wearing a flat cap, created a protracted ending that seemed to take his choir by surprise but they continued in their stride, as did their piano player. The audience, a full house of about one hundred and twenty, by now were also singing and clapping with gusto.

Performances of Hosanna and No Greater Love maintained the energy and sealed the compact between performers and audience that that this was a joint adventure,

Let It Be has become a song that has known countless deaths by karaoke, but here it was beautifully delivered with the musical director conducting not only the choir but also the audience participation, drawing from us a melodic contribution rather than simply a loud additional support.

The Lanzarote Gospel Choir hardly needed any support, such was the tunefulness and rhythm and wall of sound they created, but they nevertheless invited up from the front row a presumably semi-retired chorister, due to being very obviously and very heavily pregnant. This was a soloist we had seen at previous events and what a performance she gave here of Thank You Jesus as she raved her way through the song with total intuitiveness, even trilling and scatting a la the late, great Ella Fitzgerald, as she added a touch of jazz to the proceedings.

To slow things down and perhaps to give his choir a rest the musical director turned to the audience and proceeded to teach us how to sing like a choir, using only one word, the Hallelulah that is the tile of the great and much covered song written by Leonard Cohen. To be honest, we in the audience were a bit ragged at first, but this musical director is unforgiving and was obviously not going to bring the choir back on until we had perfected the eight part repetition of this particular word and within five minutes we were performing it, in complicated harmonies, with a panache that would not have been out of place on any of Cohen´s Greatest hits albums.

There is something of Gareth Malone in this director. He is louder and more edgy than the man seen so often creating choirs on the BBC but has much of the television maestro´s passion and flair for music.

Anyway, now the choir had had time to catch their breath, much needed for the way they deliver Oh Happy Day, once a massive hit half my lifetime ago for The Edwin Hawkins Singers.

The musical director then had his choir deliver an encore in return for the standing ovation and calls of bravo and demands for more from the fans. Surprisingly, though, he took the lead, in tuneful but gruff voice, on Stand By Me. This contrasted neatly, however, with the sweetly toned responses he drew from his choir.

When the night was over, way too soon, we were left wondering what was really the thirtieth anniversary being celebrated in the listings for this event, for we had obviously missed something in the Spanish text. We now believe this to be a series of events celebrating three decades of choral singing on the island, but we feel sure the genre must have a longer history over here than that. We will try to find out but if anyone out there does know what this event was celebrating please let me know at normanwarwick22ÿahoo.com.

Dee and I have been fortunate enough to have seen a couple of concerts by Ladysmith Black Mambazo in the UK and one by their sister group, The Soweto Ladies Gospel Choir and the sound made by each was enormous. It might seem over reaching, then, to compare the power of The Lanzarote Gospel Choir but, for sheer energy and dynamics as well as for excellent arrangements and deliveries, I feel justified in placing these names in the same paragraphs.

By the way, perhaps deserving of a mention in despatches is the brave young male vocalist with the courage to stand alone amongst Lanzarote Gospel Choir´s beautiful looking and beautiful sounding ladies. It can´t be easy ! A special commendation must also be made here to the musical accompanist, a gentleman we have seen at other events. He was beaming with delight throughout the evening and added some interesting musical flourishes on several songs that lifted them to another level.

And we all left beaming with delight, too. There were huge smiles and excited chatter and laughter all around as we left the auditorium and Dee and I sang Oh Happy Day and Let It Be all the way through the dark drive across La Geria and back to Playa Blanca.

The little press organisation I ran in the UK to promote the arts had a strapline proclaiming ´news, interviews, previews and reviews´ but it is difficult, at least in any English language publications over here, to find either preview or review. A couple of glossy magazines offer a what´s on page but they are at the mercy of the Spanish authorities supplying them with copy. Here at lanzarote information Miguel previews a weekly what´s on agenda in his newsletter, and I supply ´review´ copy like this that I am always delighted he sees fit to place on the web site.

Nevertheless if you are holidaying here or are a prospective or a long established resident here, don´t be afraid to just pop in at the Tourist Information offices in any of the municipalities and pick up the arts and culture leaflets and Guia booklets. Often the text is only in Spanish but there are invariably accompanying photographs, and sometimes even a short English passage offering a clue as to what sort of event is being described though, of course, it is likely that most of you speak and read Spanish far better than I.

We collected November´s Programacion Municipal Ayuntamiento de Yaiza on 2nd of this month and, from that Spanish language publication alone, were able enter several noteworthy events on to our calendar. As you will have guessed, this little local magazine advertises events solely around the Yaiza municipality but the cover nevertheless displays colour photographs to announce conciertos (concerts), Poesias (poetry readings) and Exposicions (visual arts exhibitions).

On Friday 9th November is the official opening, from 7.00 pm, of De Tierra Y Mar, an exhibition of ceramics created by Tino Aleman, at the Casa de la Cultura Benito Perez Armas in Yaiza.

The following night, Saturday 10th November, you can hear a Concierto ´Basico´ by acoustic musician Benito Cabrera with Besay. This is one of the frequent concerts at which tickets are free until all seats are filled. You can imagine it pays to be early, but doors usually open about forty five minutes before the advertised start time, which here is advertised as being 8.30pm.

At the same place on Friday 16th November there is a Concierto y Presentaciaon del Poemario de Yolinda Hernansez. Photographs suggest this young female artist will accompany her own songs and poems on guitar, taking to the stage at 9.00 pm

The next night at the same venue sees the 1X Encuentro Poetica Yaiza 2018 and the photograph suggests, as does the title, that this will include readings of their own material by several established poets. This begins at 7.30.

We will be bringing reviews of all these events but we can inform you here, in preview, that you would find yourself welcome at any of them. Each of the hundred or so we have visited in our time here has taken our breath away.