Why Does Lanzarote Suffer When It Rains? 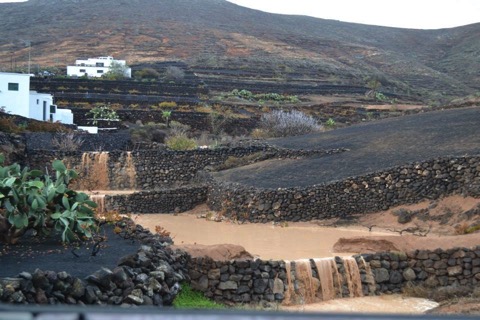 We don’t get rain in Lanzarote often, but when we do……

It was interesting seeing some of the comments on social media last time we suffered from some heavy rain and:

Comments included the fairly gentle: “If schools closed where we lived every time it rained, the kids would never get an education,” but in some cases they were more robust: “Must be a third world country if you can’t cope with a bit of rain.”

So here are some facts:

It might sound strange, but it’s our reality. We often go for months without any rain, and our average annual rainfall is what you might expect in a month in Manchester. Typically we’ll get very heavy rain once or twice each year, but sometimes we’ll go 3 years between heavy downpours.

Because it’s so rare, it really isn’t worth creating a whole infrastructure to deal with it when it happens. So we don’t have guttering on our houses, we don’t have a network of storm drains in our towns and villages. Put simply, the cost outweighs the benefit.

When we get heavy rain, it’s really heavy

Sometimes we get half our typical annual rainfall in one day. Even if we were inclined to build all the infrastructure mentioned above, it probably couldn’t cope with the sheer volume that happens sometimes.

Lanzarote is a volcanic rock

The island is tall, high and the surface is dry and doesn’t absorb water. In northern Europe, rainfall is absorbed by soil and finds its way to rivers. We have neither in Lanzarote, so the rain pouring onto the hills on the island simply flows through natural and man made barrancos, straight towards the ocean. And of course, our resort areas of Puerto del Carmen, Costa Teguise and Playa Blanca are right where it wants to go – at sea level. That’s why we get flooding when it  rains hard in Lanzarote.

When it rains, the wind tends to be from the south……

Which is why we have problems at the airport. Our normal runway, 03, works perfectly for 95% of the year, but when the wind changes to a southerly and brings cloud with it, aircraft have problems landing – airport problems in Lanzarote.

…….And with a southerly, we get a heavy Atlantic swell

It’s a classic double whammy, the south wind brings the full force of the deep Atlantic into play, and no sooner than our poor visitors are being diverted to Fuerteventura, so the ferry companies cancel their services due to the big waves. And high tides and a swell just add to the flood risk.

We have tiled floors

Almost all the properties in Lanzarote, including the schools, have tiled floors. Perfect for our weather, they are clean, cool and last forever. But they are lethal when it rains, especially, as we’ve already mentioned, when buildings leak in unexpected places.

With many roads liable to flooding, schools tend to close when heavy rain is forecast, to save parents risking the journey and children from having accidents when they slip on hard tiles. As we said, it’s only for a couple of days a year.

Electricity cables are still overground in many places

Look on many buildings in Lanzarote and you’ll see a spaghetti of plaited cables which run electricity from house to house. In really heavy rain, the junctions soak through and short, causing power cuts.

As we already said, we don’t have storm drains, so when the water begins to flow in the streets, it fills telephone junction boxes and quickly disconnects the internet.

So there you have it. That’s why we suffer when we get rain in Lanzarote – and in typical island fashion, after a couple of dire days, the sun is shining, the sky is blue, and we can all put our mops away for a few months!