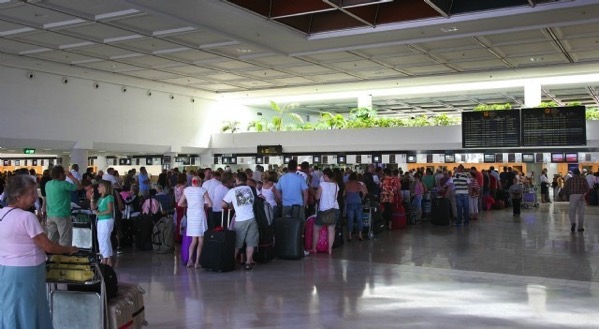 We had airport chaos at Lanzarote last weekend, when several aircraft had to divert to Fuerteventura and Gran Canaria. Fortunately, it doesn’t happen very often, but when the wind is strong, and gusting from the wrong direction it can cause wind shear, so attempting a landing is dangerous. In total 25 aircraft were diverted and the problem ran into Sunday as airlines tried to cope with aircraft being out of position.

The only solution would be to either extend the runway considerably, or to create another runway running across the existing one. Despite the fact that Lanzarote is now one of Spain’s busiest airports, the frequency of this issue probably doesn’t warrant such drastic measures.

The problems for us are exacerbated by the fact that we are geographically remote from Europe, which means crews are often tight on their maximum permitted flying time when they get here, and airlines aren’t able to draft aircraft or new crews in from nearby areas, in the way they would be if this happened in central Europe.

But, recognising that this does happen from time to time, we need much better contingency plans in place. There was absolute chaos at the airport over the weekend, with several hundred passengers being left in the airport terminal without information, no air conditioning (it goes off at midnight) and nowhere to buy food or drinks. That’s simply unacceptable and reflects badly on the airlines and Lanzarote.

Talking to passengers involved, their biggest gripe was that they were not told what was happening. Some airlines were able to get their passengers into hotels, while others claimed there were no rooms available, so their passengers were advised to sleep at the airport.

Here’s what we need to do:

It’s not exactly rocket science, is it?

Read about the temperature you can expect in Lanzarote.