Where To Eat The Best Arepas In Lanzarote 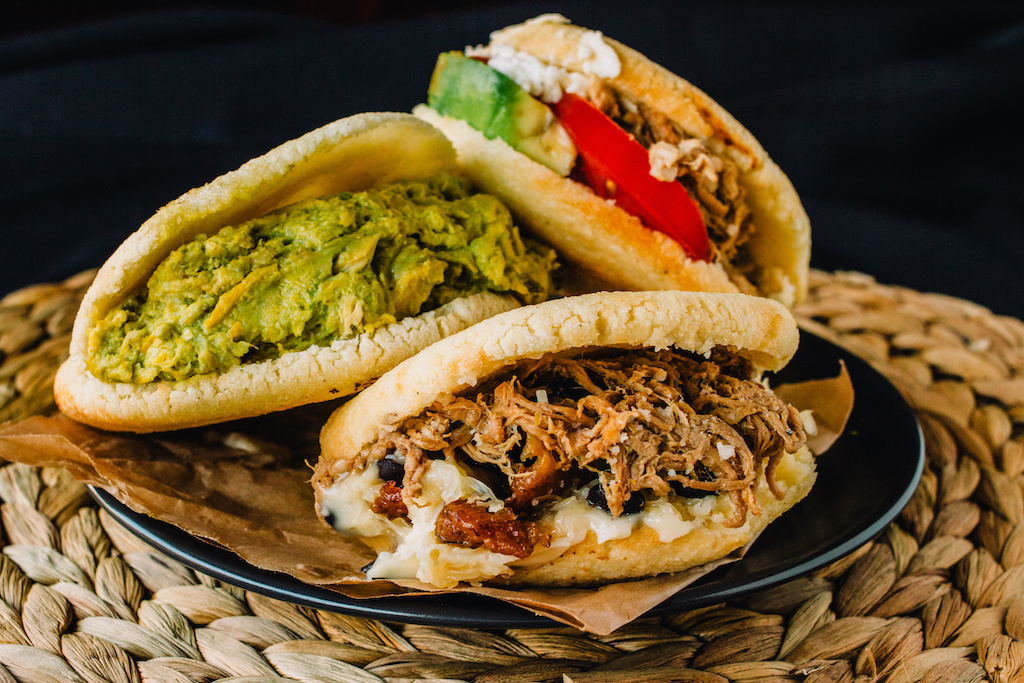 Arepa bars in Lanzarote are popping up everywhere, to serve an increasing demand for an inexpensive healthy snack for all age groups. At around €3.50 depending on the filling, they compare favourably on price with Spanish tapas or hamburgers. For the uninitiated, the arepa is a bun made of cornmeal, a flour which is ready cooked and gluten-free. They can be whipped up in minutes using 3 ingredients (cornmeal, salt and water). Some chefs might also add butter, an egg or cheese to add a richness to the dough. The mixture is then made into flat round patties, which look like uncooked bread rolls. Next, it is either deep fried or cooked on a hot griddle and in the oven. The resulting warm bun is split down the middle and packed with a variety of fillings and served in paper cones or serviettes.

I ate my first arepa after a long beach walk on Famara, the day after the Spanish lockdown was lifted. My usual coffee bar was full with locals enjoying their freedom. Mindful of the new social distancing rules, I crossed the road to Las Bajas, a café bar that was opening for the day. The owner Tila, welcomed me warmly, explaining the name of the restaurant came from the black rocks at Famara beach. She speaks fluent Spanish, English and Italian.

When I asked for the tapas menu, she pointed to the extensive menu boards, on the walls of the restaurant, one of which was arepas. There were also boards for breakfast, lunch & dinner menus in Spanish and English. She said that they use fresh local Lanzarote ingredients. The arepas menu ideas come from Venezuela, where she once lived. She gave me a potted history of the famous arepas and I could hardly wait to try one. She put into practice all the new hygiene regulations, was masked and ensured each table was sanitised between customers and 2m apart, the tables outside, were prettily divided by cactus plants.

After an agonising decision for a food I had never tried before, I choose the avocado & feta cheese. Tila explained that the arepas at Las Bajas are made individually, cooked on a hot plate and finished in the oven. She explained that many arepas are deep-fried for speed, but at Las Bajas they were made them in the traditional way and it would take a little longer. I didn’t mind, I ordered a café con leche, which could be served with a drizzle of vanilla syrup or cinnamon. I loved the extra touches that Tila maintains at this charming restaurant.

Marvelling at the views of Famara cliffs and the freedom of leaving the house after 70 days of lockdown, my arepa arrived in an attractive paper parcel. I immediately loved the taste of the warm cornmeal bread; it was much lighter than I had expected. It was overflowing with fresh avocado and feta cheese. I would never have considered putting those two ingredients together before. I ordered another café con leche, admiring Tila’s friendly approach as she waved to locals and chatted to passers-by enjoying their new found freedom. There were few visitors to a quiet Caleta de Famara. All the colourful Surf shops were soundly shut and the streets that used to buzz with young people in bright neon Lycra, were sadly missing.

At the end of May, having researched the uses of cornmeal and arepas in particular, I bought cornmeal flour in Eurospar for a couple of euros. I was itching to make them at home. It is a simple process. That is, take one-part cornmeal, to just over one-part water and a couple of pinches of salt in a large bowl. Stir the mixture with a wooden spoon, until all the flour is dissolved and creates a workable dough. Leave covered with a clean tea towel or cling film, for 15 minutes, before shaping them into patties. I cooked mine in my favourite cast iron pan, with a smear of olive oil, for approximately 5 minutes each side. The tricky part is splitting them almost in half with a sharp knife whilst they are still hot, and also keeping part of the arepa joined at the bottom so the filling doesn’t fall out completely! I was ready to fill my first arepas. I had cooked a salmon fillet, which I flaked, I added home-made guacamole with a hit of chilli, and topped them with sprouted Lanzarote lentils. I sat them gently on a bed of lettuce like a proud mother. “Done” as Gordon Ramsey is fond of saying. “Dam good” if I do say so myself.

I decided this delicious and inexpensive street food needed further investigation. A friend had told me about a bar in Mala. So, one day, after a long beach walk near Charco de Palo, with a friend, three weeks into the new normal, I decided we deserved a treat. We visited Arepera -Bar Jojoto y Millo on the main Calle Morro, where there is a restaurant opposite called Don Quixote. It was just after one o’clock, and I was hot from the sun and my exertions. Fortunately, only one table was taken outside, by a young loving couple, staring into each other’s eyes, under the shade of a beautiful tree. Ah love!

There was a choice of 5 tables, all socially distanced and all with sun parasols. The arepa menu was available by using the QR code system labelled on each table. The extensive list of fillings gave me a jolt of anxiety. There are so many delicious sounding combinations. If you choose one, (and some are filling enough for a whole meal) then you have to leave out all the others. Sob. I wanted to taste test every combination. I eventually choose the pulled pork with teriyaki sauce and ordered a glass of Famara, a local dry white wine. My friend ordered the tuna with avocado and cherry tomatoes. Our taste buds were pirouetting with appreciation. This arepa bar is, as far as I know, open from Wednesday to Sunday from 13:00 to 23:00, they also offer a home delivery service.

After asking in the Lanzarote Residents Forum on Facebook, I found there was a real passion for the humble arepa. I am now on a mission to find the best arepa in Lanzarote. The bar that was recommend the most was Millo y Millo in Tias. It is on Avenida Central, next to the roundabout near the Sociedad. The owner is Columbian. I was thrilled to see the menu board on the wall offering 30 different arepas! I appreciated, that in line with current hygiene rules the tables were well spaced out. Inside were comfortable seats and tables and also arranged with care on the pavement, café style outside, there is also an outside glass covered area with more tables and seating.

Again, I didn’t know what to choose. Finally, it was between the crab salad or the prawn/ avocado with marie-rose mayo. I went for the prawn avocado which is called Martin on the menu. It was delicious at €4.50 and overflowing with tasty fat prawns and perfect slices of avocado and piquant sauce. My friend ordered the Perico which is scrambled egg with tomato and onion at €3.25. For between 25c-€1, extras can be added to the arepa, and you can choose from salads, fried egg, tuna, queso fresco, avocado and jamon Serrano. We pushed the boat out and ordered wine.

Since stricter hygiene regulations have been implemented, and despite the difficulties of having to communicate wearing a mask until your food or drink is in front of you, I felt empathy for the staff who had to be masked constantly during their working day. Given these extra demands on life, our waitress was helpful and friendly and spoke in English, even though we were determined to practice our Spanish. To see their full menu go to their Facebook pageMilloyMillo and scan the QR code into your camera

Arepas have a long culinary tradition. They are one of the few foods from pre-Columbian history that have remained relatively unchanged since they were first consumed 3,000 years ago, in the area that is now Columbia and Venezuela.

Here are five more foods to try in Lanzarote.