Walking The Historical Centre Of Teguise 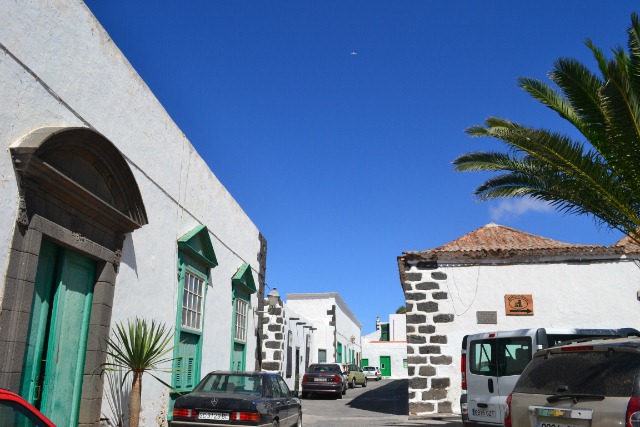 I visited Historic Teguise for a tour of the old capital of Lanzarote. The initial group on the 11.30am tour were mainly Spanish tourists with a few English, I found the tour really interesting and learned a lot about this most historic of towns in The Canaries.

Ask for a copy of the Ruta del Casco Histórico de La Villa de Teguise from the Tourist Information office situated on León y Castillo, this lists 20 interesting points to find around the town.

Also known as “Plaza de San Miguel Arcángel”. Situated around the plaza you can find iconic buildings from Teguise including the church Nuestra Señora de Guadalupe, Palacio Spinola which is now the Casa Museo Timple and La Cilla.

This building was the Palacio de los Gobernadores (Governor’s Palace) and before that the Inquisition House. It is officially the residence of the president of the Canarian Government although home to the Casa Museo del Timple since earlier this year.

The building that is currently the bank Caja de ahorros de Canarias was the office called La Cilla de Diezmos y Primicias where the church collected tax payments from the towns people.

This church dates back to the 15th century and was attacked several times by pirates causing irreparable damage. The church was last restored in 1909 after a fire.

This street at the back of the church translates to the Alley of Blood and was named after vicious pirate attacks where a river of blood ran down the cobbled street.

La Mareta was a big and important aljibe collecting rain water from the hills for the Lanzaroteños who would come from all over the island to the Gran Aldea for water. This water storage was declared a Monumento Histórico Artistico in 1970 after it almost vanished.

This church was founded during the 17th century, it is famous for it’s cross which is attributed to Luján Pérez.

A typical Canarian house dating back to the 18th century which holds a massive archive of historical information about Lanzarote.

There are 14 crosses situated throughout the town, these are decorated each year for the Día de Cruz on the 3rd May.

Within the streets of historic Teguise you can find lots of different architecture from stately homes to parish houses.

The Castle House originally spread over a full block and was one of the most represented houses in the town.

The Diabletes from Teguise date back to the 15th century a combination of aboriginal and Spanish beliefs. The diablete mask is that of a male goat and represents virility.

This convent of the Dominican Order was founded in 1698 by Captain Rodríguez Carrasco, the interior has two halves separated by four arches built from red and black stone. There is a golden altar piece which has an Indian influence. The building is currently used as an art gallery with occasional theatre performances and concerts. The original building also included the section that is now the Ayuntamiento.

Originally the residence of the Dominican, the Spínola family converted the house into a Lanzarote art and literature centre.

Built in 1590 the Franciscan convent has two sections separated with arches and three Baroque altars. This Museum of Sacred Art reopened in July 2012.

This was a stately home where the goverment would meet to make the political decisions for the island. Now it is home to the Cultural department of the council.

This building was the first hospital in Lanzarote. Since then it’s been a children’s home and since 1825 a public theatre.

Originally a look out tower on the hill of Guanapay this was walled and converted to a castle in the 17th century to protect the islanders from pirate invasions. In 1991 the castle was a museum dedicated to the emigration of Canarians to America, now the Pirate Museum which opened earlier this year. There are stunning panoramic views from here.

Interesting facts gleaned during the tour:

Affluent families would be recognised by the number of steps up to their front door – the biggest is the house opposite Convento Santo Domingo which has five.

The hospital was not situated opposite Ikarus, the family found the plaque in their patio and mounted it on the outside wall.

The statue in front of Ikarus was awarded to Teguise for being the cleanest town in Europe.

The oldest original cobbled street in historic Teguise is where the FT DIY store is.

The house where Severino Bethencourt Ramírez, the illustrious son of Teguise lived has a ghost! Previous owners of the property including foreigners have sold the property due to the ghostly prescence within.

The rooms underneath Casa Torre were used for interrogation during the inquisition, you can find slit windows at the side of the house for the basement.

The two lions placed on the entrance to the plaza were just put there to tidy it up and for no special reason.

Historic Teguise is a really interesting place and not just for the Sunday market, visit any day other than a Monday (when most places close) to explore the culture and history of the old capital of Lanzarote.

We’re the Lanzarote car hire specialists. We’ve been offering car hire to our readers since 2008, working with all the best companies on the island, to offer transparent, low cost car hire, with no hidden extras or charges. Get in touch today for a quote for your dates: