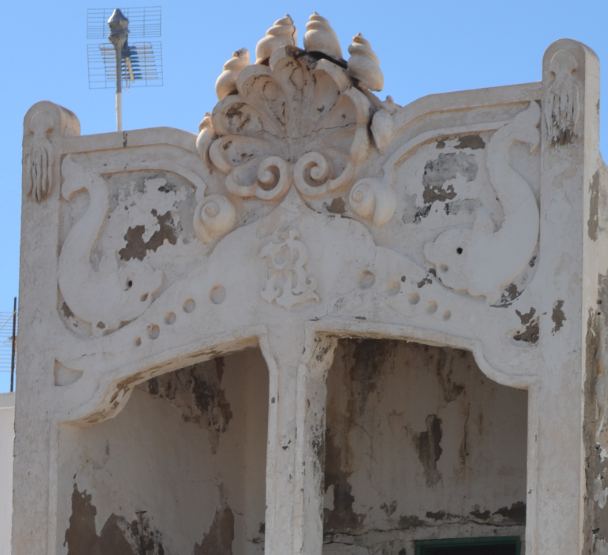 Linda, one of our readers asked us if we knew of any information about the fantastic little house in the harbour of Caleta de Famara.

It was another reader Jerry, who sent a link to this recent article in the Diario de Lanzarote, his reason for the contact was the decay of our older buildings in Lanzarote and a frustration as to why they are not renovated or sold, just left to fall into ruin.

The article, written by M.J. Tabar explains that his quirky house was the first modern building in Lanzarote. Luis Ramírez was a gentleman born within the municipality of San Bartolomé and was considered rich and well travelled. Ramírez wanted to portray the fashionable architecture he’d seen during his travels, the result was this house built in Lanzarote during the early 20th century, on an almost non existent waterfront in La Caleta.

The facade of this art nouveau house is incredibly ornate although hard to distinguish now with the passing of time. The top floor balcony has two dolphins either side of the initials LR with a conch and periwinkle seashells adorning the centre top.

Harder to distinguish on the ground floor is an octopus with four tentacles.

Luis Ramírez was involved in various projects around the island of Lanzarote, he owned the Casino de Arrecife which we know as the Casa de la Cultura, he saved the 18th century building in La Villa de Teguise known as the Casa Museo del Marqués de Herrera y Roja in 1929. The Ermita de las Nieves, the shrine for pilgrims was built from his donation, as well as the renovation of the Castillo de Santa Bárbara. Never married, this was a man who shared his fortune with Lanzarote, he also created a scholarship fund for students who couldn’t afford to attend school.

In 1935 the “el edificio extraño” property in Famara  was donated to the parish of Nuestra Señora de Guadalupe in Teguise, on condition that the house is “well maintained. Since then it has been owned by the Diocese of the Canaries, and they have done no maintenance

Would it not be fitting then to honour the legacy left by Luis Ramírez? It’s sad to find that this gentleman helped to save some of the island’s oldest buildings and yet we are leaving his to ruin.

The Cabildo announced a plan to refurbish it in May 2018, and signed an agreement with the church to do so, but since then, nothing has happened.

Also read about the house with the statues in Teguise.